The Daily Nexus
News
Professor, Alumnus To Release Book on UCSB History
January 5, 2015 at 1:17 am by Juliet Bachtel 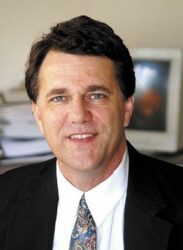 Professor of Economics, Santa Barbara native and alumnus Lanny Ebenstein will release a book about the history of UCSB this February to the Santa Barbara Historical Museum titled The Rise of UCSB, 1944-2014 (Noticias).

The book will be the first of its kind to be written in over 35 years about the university’s history, and will cover events from Santa Barbara’s Chumash settlement to Isla Vista during and after the Vietnam War, as well as stories about notable university alumni and faculty. The 23,000-word book will feature 20 to 25 photographs and illustrations from different time periods, and copies of the book will be given out to the University of California Board of Regents, members of the state legislature, individual UC campuses and university faculty.

While Ebenstein originally wanted to release the book in 2014 in conjunction with UCSB’s 70th anniversary, he said the extended amount of time it took to complete the book allowed him to provide more background on what he calls “this great institution.”

“I don’t think there’s a university in the world that is rising as fast in the academic and popular consciousness as much as UCSB,” Ebenstein said.

According to Ebenstein, his book focuses on movers-and-shakers that have helped shape the university into what it is today, such as Pulitzer Prize-winning politician and publisher Thomas M. Storke, Chancellor Henry T. Yang and UCSB’s Nobel laureates.

“Thomas Storke ­— who Storke Tower is named after — he was a publisher of the Santa Barbara News Press and played a key role in the transition of Santa Barbara City College to the University of California,” Ebenstein said. “There have also been great accomplishments that have been made by the Chancellor Yang’s years at UCSB.”

Ebenstein said his book also explores the development of Isla Vista in relation to its relationship with the university, touching on events that have strongly impacted I.V. culture, such as the Vietnam War protests.

“I hope it will help inform some of the discussions on Isla Vista Municipal Organizations that are alive right now and about self-sustainability and self-governance,” Ebenstein said. “The history will highlight the relationship of the university and Isla Vista over the decades. The Vietnam Era was especially interesting as the events that occurred at UCSB mirrored the attitude of the nation.”

According to Ebenstein, his book will provide readers with a detailed knowledge of the university that he hopes will foster within students a deeper understanding and thus appreciation for UCSB’s prominence.

“The main benefit to students would be that this is a history that basically praises the evolution of UCSB from the time that it was a Chumash encampment to the present,” Ebenstein said. “With any history you have to pick and choose what area you have to emphasize but it’s something that students will have a much stronger appreciation for.”

Ebenstein, who grew up in Santa Barbara and whose family has long been involved with the university, said his personal life and family history serve as major sources of inspiration for his book.

“UCSB has been a big part of my life,” Ebenstein said. “There’s some really important people and I felt it was about time to write it all down for people to know.”

Professor Emeritus of Political Science Thomas Schrock has served as an inspiration to Ebenstein for decades and originally suggested Ebenstein write about the university’s history over 20 years ago when Ebenstein was his student, Ebenstein said.

According to Schrock, his family and Ebenstein’s family have been teaching and learning from each other for generations.

“Lanny and I learned political science from each other, after that we had both learned it from his father, Professor William Ebenstein, a venerable colleague of mine in Political Science at UCSB,” Schrock said. “My son learned camping from Lanny in the Boy Scouts. Seems like some Schrock was always learning from some Ebenstein, and it is still the case!”

“I think it would be an important thing to study and record,” Bueno said. “History needs to be written down and the fact that it’s the history of UCSB, where we all live and go to school, makes it all the more worthwhile and interesting to the average student.”

According to Ebenstein, — who said he realized when writing the book that UCSB in fact has seven Nobel Prize winners as opposed to the widely-accepted six, as College of Creative Studies alumna Carol W. Greider received the award in 2009 for Physiology or Medicine — he enjoyed writing the book and talking with students and faculty to complete it.

“UCSB is unquestionably becoming one of the most prominent colleges and universities in the world,” Ebenstein said. “Both academically and in the popular media, UCSB is like a meteor.”