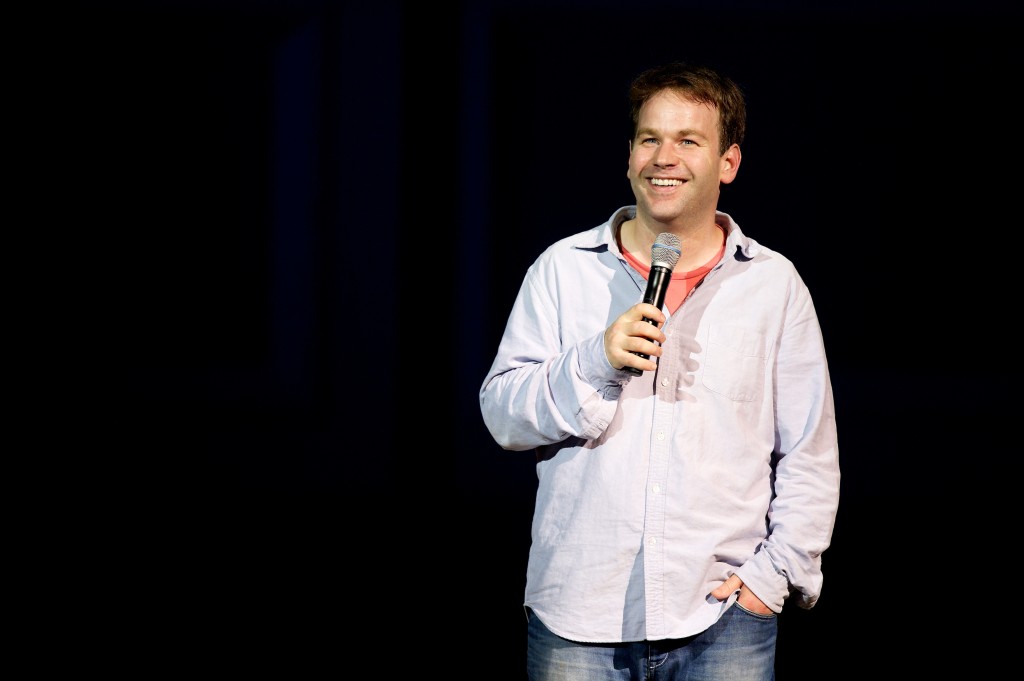 Mike Birbiglia stepped onto the stage at Campbell Hall on Dec. 4 in Adidas, jeans and a button-up. Currently on his “Thank God for Jokes” tour, the laid-back comedian wasted no time getting down to business. He dove straight into his set the second he stood up.

The Massachusetts native opened with a joke involving his home state and his wife Jen, who he referred to as Chlo. Why does he call her that? Who knows, but it was funny. Birbiglia described the many inside jokes he and his wife share and how no one else thinks they are funny, but they don’t care. “I call Massachusetts ‘Catssachusetts’ and she thinks it’s hilarious. So we both laugh every time I say it, and no one else does! It’s great!” But of course, Birbiglia’s animated delivery made the slightly lame cat joke one where the audience erupted with laughter.

His one-of-a-kind storytelling made it easy to see why Birbiglia is a rising star in the comedy world. Starring in three Comedy Central specials, the 36-year old has also released three comedy albums. The New York Times describes him as a “supremely enjoyable monologist.”

One thing that sets the comedian apart is that he has rapid eye movement behavior disorder, leading to an animated and somewhat jittery delivery. After falling out of window, he was inspired to create his 2008 one man show “Sleepwalk with Me,” which became an immediate off-Broadway hit.

His next venture was the release of his first book: Sleepwalk With Me & Other Painfully True Stories, which was nominated for the 2011 Thurber Prize, an award that recognizes outstanding writing in humor. In 2012, he wrote, directed, and starred in the film “Sleepwalk With Me.”

As the night continued in Campbell Hall, Birbiglia continued to dish out humor. His mildly inappropriate jokes were relatable and not overly complicated, as he got straight to the point, all while pacing from one side of the stage to the other. From telling us about airplane escapades or his relationship with his parents, nonstop laughs occurred from beginning to end.             One story that stood out was him reminiscing his Catholic childhood and how weird it was to love some guy named Jesus. “It’s such a strange thing being told that this guy named Jesus loves me so much and I love him too — but at seven years old, I’m just like, ‘Whoa I haven’t even met the guy! And I love him?’” Birbiglia also poked fun at Catholicism’s scandals by saying that since he talked too much as a kid, the priests knew better.

Expressive hand gestures helped tell the story of his visit to the doctor for a sharp pain he would experience during sex. He compared it to pouring hot sauce in your mouth but only it’s in the crotch area. “Your tongue is like well, your mouth-dick right?!” he quipped, to which the audience roared with laughter. “If there’s anything you will remember from tonight Santa Barbara, it will be the creation of the word ‘mouth-dick.’”

Besides his career in jokes about growing up Catholic, the talented comedian has also acted in films like “The Fault in our Stars,” “Cedar Rapids” and the HBO series Girls. His second one man show “My Girlfriends Boyfriend” opened in 2011 and toured throughout the U.S., the United Kingdom, Australia and Canada. He has appeared on various late night shows like “The Conan Show” and will continue his “Thank God for Jokes” tour until New Year’s Eve. Anyone interested in having a night where new words like “mouth-dick” are created should attend a Mike Birbiglia show.

Mike Birbiglia was brought to Campbell Hall by UCSB Arts & Lectures. For a full list of their 2015 season, go to artsandlectures.sa.ucsb.edu/.