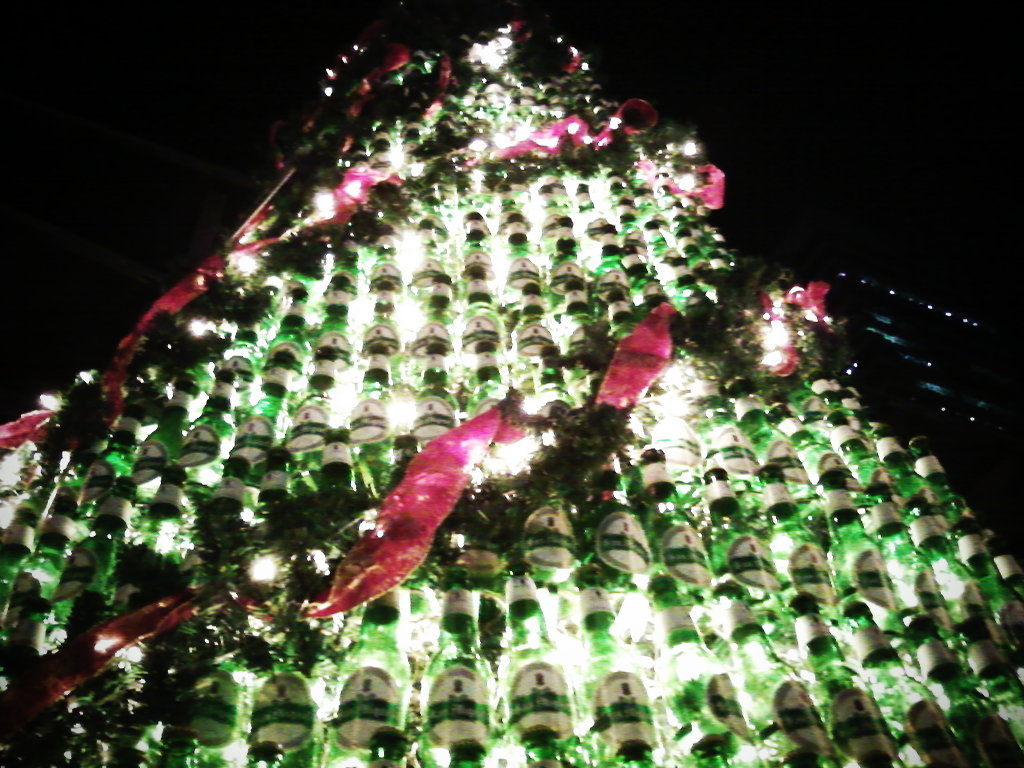 It’s that time of year again. And no, not the time for returning four musty stockings to the nails in the mantel over the fireplace, not for untangling briers of short-circuited strings of lights, not even for ugly sweaters. Okay, maybe ugly sweaters pass, but only if you wear them while drinking some craft beer. That’s right, with the at-times religious holiday and at other times secular excuse for getting drunk on eggs and whiskey around the corner, shipments of specialty releases are already lining the shelves of liquor stores. They might as well be wrapped in crepe paper and host red, green and golden ribbons about their necks. For the beer crowd, Christmas always arrives early.

Now wait. Before anyone gripes about this review’s lack of religious diversity, let me just note that with the exception of non-denominational brews, not many breweries hop on any holiday bandwagon, besides perhaps Santa’s sleigh. If Keg N Bottle offered Shmaltz Brewing’s Hanukkah, Chanukah: Pass The Beer, an eight percent ABV dark ale brewed with eight malts and eight hops, the brew would without doubt appear on this list. While this issue could be attributed to devout followers of Christianity in the beer business, keep in mind that in 2013, the Christmas season generated over three trillion dollars and constituted 19.2 percent of retail sales for the year. In other words, Americans like flexing their credit card arm in the month leading up to Dec. 25. If they’ll buy ugly sweaters, they’ll probably buy possibly ugly brewing experiments, right? Absolutely. So rather than blaming the possible religious sentiments of master-brewers for the lack of non-Xmas beers, blame our nation’s obsession with buying each other stuff.

Religious affiliations aside, I think it’s safe to assume that beer lovers will inevitably unite under their shared devotion to malted barley, hops and yeast. On The Menu amassed a collection of six limited release and holiday beers, (all conveniently available at I.V.’s KnB), with the intent of determining which are worth the hype. To gauge the quality and overall likability of the brews, we polled both wannabe connoisseurs and complete amateurs on a diverse selection ranging from barrel aged stouts to obviously pine tree-inspired ales. So whether you light the candles of the Menorah or Kinara, plug in the lights of the tree or flip the switch when you return home on any other day, it’s that time of year again: time to imbibe. 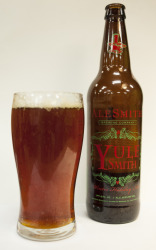 From one of San Diego’s elite breweries comes YuleSmith, an Imperial Red Ale that packs 8.5 percent alcohol by volume. The “cold weather” incarnation of their seasonal series, this Red pours a clear copper and boasts caramel-like sweetness. While undeniably complex with its prominent hop aroma and malt body, the brew leaves the tongue half-numb from its bitter, astringent aftertaste that “lingers like that one relative that you can’t wait to leave after Xmas dinner.” While overall a drinkable brew, you may need some figgy pudding to wash it down. 3.07/5

Peter: “It’s like taking a shot of cedar sap and soy sauce.”
Katie: “It tastes like you’re at a Christmas tree farm. Bitter but fresh but with a not-so-desirable aftertaste.”
Eli: “Tastes like wood … but not necessarily in a bad way. Definitely a splash of caramel in there, too.”
David: “Syrupy texture, almost caramel. Bitter aftertastes that saturates the tongue in ambiguity.” 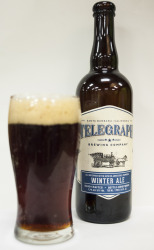 Inspired by Mexican style hot cocoa, this ale throws the taste buds for a loop in the best way possible. Brewed with sweet ancho chilies and chocolate and caramel malts, Winter Ale entices the nose with nutmeg aromas and blankets the tongue in soothing spices and a faint, welcomed hint of chocolate. For some the 7.7 percent ABV ale recalls julmust, a Swedish soft drink consumed during the holiday season, while for others, Telegraph’s seasonal release is endemic to Santa Barbara’s culture and climate due to its originality. Sophisticated yet deceptively simple to the palate, this balanced and inoffensive brew may not surpass Abuelita in sales, but it will certainly help many local beer aficionados through the 58 degree winter. 3.22/5

Katie: “Soft aftertaste. Sweet and spicy undertones. I like this beer.”
Shawna: “Not outstanding in a good or bad way.”
Eli: “Very Christmas-y in that I feel like I should be more excited about it than I am…”
Peter: “Like a Belgian ale but with cloves and some heat.”

The seventh stanza from Orange County beer boutique The Bruery’s “12 Days of Christmas” series, 7 Swans-A-Swimming strays from typical craft brew tradition. Rather than loading an ale with holiday spices or experimenting with foods taken directly from the holiday table, this clearly Christmas release has little to do with Christmas. Cola-brown with an intense sweetness from the addition of dark candi sugar, this Belgian Quadrupel lands at 11 percent ABV and tricks the taste buds. With prune and grape undertones that dominate the otherwise malty brew, 7 Swans could masquerade as a big Cabernet, but maybe you’re into that. 2.89/5

Robert: “Smells and tastes concord grape-y with some malty-yeastiness.”
Peter: “Like getting coal on Xmas.”
Sarina: “The kind of beer that makes you burp loudly on your date’s face.”
David: “For all intents and purposes, it’s grape soda, disguised as beer.”
Eli: “Tastes like soy sauce, syrup and vodka … two of these would make me sick.”
Brian: “This tastes like rubbing alcohol. Never again.” 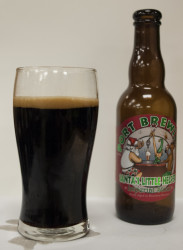 Traveling all the way from San Marcos, CA, Port Brewing Company’s barrel-aged Imperial Stout combines serious beer crafting with a bit of facetious marketing. The whopping 12 percent Santa’s Little Helper is a) the opposite of little and b) actually released in July. Despite its summer associations, we couldn’t resist the opportunity to fork over 15 clams for 12 ounces of this beer. It pours a deep brown like coffee with a milky brown head. While at first producing an almost pretzel like flavor, this aggressive stout mellows out to a robust nutty and chocolately sipper. With its hefty price tag and a flavor profile that seems to be an acquired taste, Santa’s Little Helper is without doubt “for beer people only.” 2.7/5 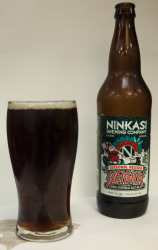 On name alone, Sleigh’r kicks some serious ass. And for those brand loyal types, Ninkasi won’t disappoint with their consistent winter release since 2009. Their doüble alt ale hits hard with a dark, forest brown pour and a thin but light and creamy head. This most metal of Christmas brews exudes unabashed hoppy aromas and its malty flavor exhibits just a hint of umami. At 7.2 percent ABV, this beer doesn’t even sneak up on the drinker; it’s an instant hit of alcohol that could send you reeling. If you want to lose control of the reigns, Sleigh’r is an inexpensive crowd pleaser. 3.37/5

Carissa: “Tastes chill.”
Robert: “Smells and tastes like a normal dark beer. Solid release but nothing holiday about it.”
Katie: “Like the really muscular man who ends up having a really small penis.”
Lewis: “Not very Christmasy.”
Sarina: “Doesn’t live up to its name.”

Did you ever sneakily peel the tape off of a present extra carefully so as not to tear the paper because you knew that that thing you really wanted would be there and you just had to know for sure? Well, Bourbon County Coffee is the beer version of that original Playstation or special edition Barbie. The only difference? You have to know you want it. Due to its highly limited release, this midnight black beer brewed with Rwandan Zirikana coffee beans is literally a “by request only” type of beer. With a cocoa-esque scent and its thin and mildly frothy body, Bourbon County Coffee might as well be coffee, not that we’re complaining. Unrepentant in its boldness and superbly executed, it’s a beer worth fighting for. Get your paws on a pint, or mug, while you can. 3.81/5

Katie: “Am I drinking coffee or beer?”
Sarina: “I’d like to start my mornings with this…”
David: “When you want to get faded and drink good coffee at the same time.”
Eli: “Smells like something I would sip by the fireside in a  velvet robe and stroke my mustache while contemplating the economy and where I went wrong.”
Shawna: “Thick and delicious, what about with vanilla ice cream?”

Between blasting xmas remixes and frequent pee-breaks, after six pints of Christmas, our tasting crew was deep in the holiday spirit. And happily so, (as this selection so clearly trumped our spoiled pumpkin batch). For some tasters, this was their first taste of beer better than what can be found in a 30 rack. “I never knew so many beers came in glass bottles,” Katie claimed. “I feel like I found myself halfway through.” Sarina followed with similar sentiments, “I’m not the same person as when I started. [This beer tasting] was an elegant and riveting adrenaline rush.” And while he may be playing two lies and a truth, Eli agreed too: “the dubstep Christmas music, the Japanese Elvis and the bare booties…just another day, I guess.”

Hi there! Would you mind if I share your blog with my myspace group?
There’s a lot of folks that I think would really enjoy
your content. Please let me know. Thanks

A share is always appreciated! You can even post directly to facebook or twitter using the buttons right above the comments section. “The Brew Review” will continue publishing similar stories to this one starting again in January!