The Daily Nexus
Sports
Career Nights Not Enough to Give Gauchos First Win
December 8, 2014 at 12:00 am by Michael Jorgenson 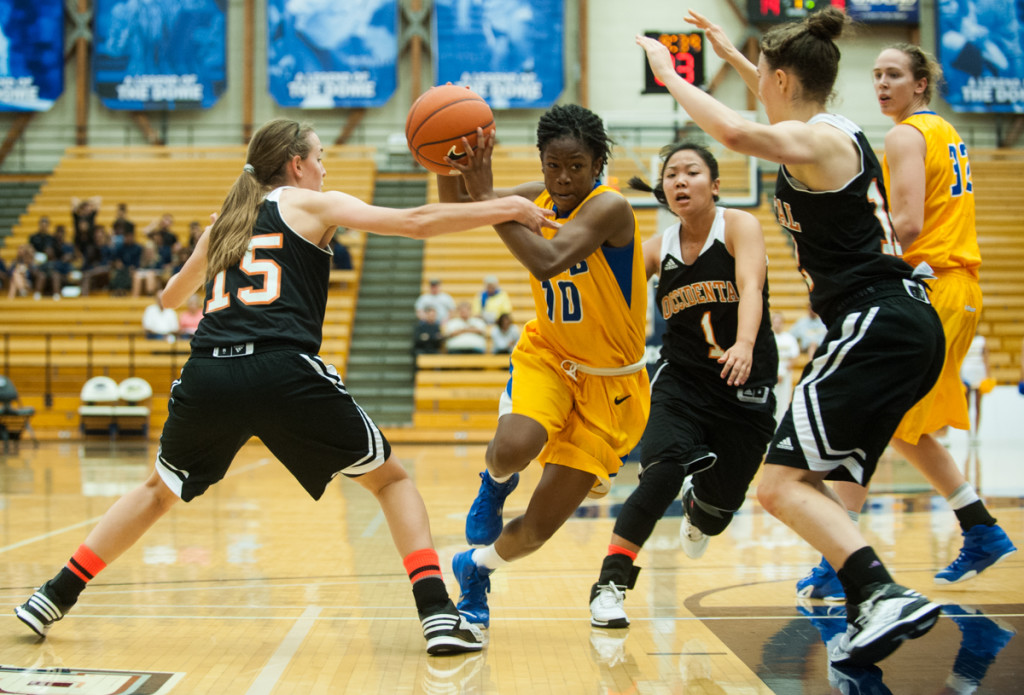 The loss drops the Gauchos to 0-8 on the season while bringing the Aztecs to 3-4.

For the first time this season, Santa Barbara got out to a quick start after a three-point play by senior guard Kristine Brance on the team’s first possession was followed by a layup from Ware to make it 5-0 out of the gates. A three-pointer by sophomore point guard Onome Jemerigbe at the 12:22 mark gave the Gauchos a 14-8 advantage and what would be their largest lead for the remainder of the game.

A 9-0 run led by Erimma Amarikwa gave the Aztecs the lead momentarily at 14-17. The teams battled over the lead for the next few minutes before a three-ball from Ahjalee Harvey with 3:42 left in the half put San Diego St. up 26-24. The Aztecs proceeded to end the half on an 11-0 run to head into halftime up 34-24.

The Gauchos battled to get back in the game for most of the second half as Ware continued to score efficiently and often, eventually finishing 9-15 from the field. However, the long ball continued to hurt UCSB, as it allowed the Aztecs to shoot 50 percent from beyond the arc compared to just 15.4 itself.

A jumper by junior forward Kendra Morrison cut the lead to 40-43 with 9:47 left, but SDSU’s senior forward Chairese Culberson answered right back with a three to push the lead back up to six.

With just 4:22 to go, a layup by senior forward Khristina Hunter made it 57-45, but the Gauchos weren’t done yet. Santa Barbara went on a 10-2 run that included five points from Jemerigbe as it cut the lead to just four with under a minute remaining. However, solid free-throw shooting down the stretch by San Diego St. helped put the game away, as it eventually won by a final of 64-58.

The Aztecs’ leading scorer on the year, freshman point guard McKynzie Fort, was shut down for most of the game, ending up with just four points on 2-8 shooting, but the starting frontcourt duo of Amarikwa and Hunter dominated for most of the way. The two forwards shot a combined 11-16 from the field and finished with 15 points apiece.

Despite outshooting their opponent for the first time this season, the Gauchos failed to pick up their first win of the year. A large disparity at the free-throw line certainly didn’t help, as San Diego St. put up 18-27 from the line compared to just 8-10 for UCSB. At

Coming off the heels of a game in which center Clair Watkins scored a season-high 18 points, the Gauchos’ senior finished 0-5 with just three points and five rebounds to go along with a new career-best of five blocks. Jemerigbe finished with a near double-double with eight points and a career-high nine assists.

The recent improvement in the shooting game continued for the Gauchos as they shot a season-high 41.4 percent from the field, giving them their second consecutive 40 percent shooting game.

UCSB returns home for the next two weeks with its next game coming this Friday against Pepperdine.