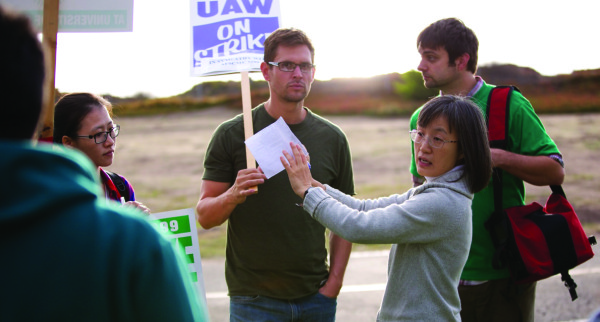 The Union for Teaching Assistants, Tutors, and Readers at UCSB — or UAW Local 2865 at Santa Barbara, pictured here striking in front of Davidson Library — held a vote on a boycott, divestment and sanctions (BDS) resolution and academic boycott on institutions committing human rights violations in Gaza and the West Bank. Kenneth Song/Daily Nexus

The vote counting and outcome will be announced on Dec. 13 and will include votes from all participating union graduates, including law and MBA students. The resolution proposal states that UAW 2865 — which represents roughly 12,000 student academic workers, including teacher’s aides and tutors across the UC system — should call on the UC and UAW International to divest from Israeli institutions and companies allegedly complicit in committing human rights violations in the West Bank and Gaza.

“[UAW 2865 is] acting inappropriately by committing its members to a controversial and irredentist position on one of the most complex and divisive international political issues of our day,” Leitner said.

Graduate student and Informed Grads member Adar Eisenbruch said BDS against Israeli institutions is “counterproductive to peace” and “especially pernicious” to students because it inhibits the free flow of academic ideas.

“Learning and research depend on engaging with each other: interacting at conferences, doing research together, having debates,” Eisenbruch said. “By curtailing the free flow of ideas and asking us to judge work not on the basis of merits but based on someone’s nationality is bad.”

But according to UAW 2865 campus unit chair and ethnomusicology graduate student Aviva Milner-Brage, the Isreali BDS is a way for academics to express dissatisfaction with the Israeli government’s policy choices and to send a message condemning human rights violations in the West Bank and Gaza.

“Israel’s violence against Palestinian civilians is an important international problem and one that the U.S. is actively involved in aiding and perpetuating,” Milner-Brage said. “At the moment, the BDS movement is biggest tool we have as academics to have a voice against Israel’s military actions.

“The union claims to speak for us all, and yet in simply proposing and supporting BDS, even before the vote, the union has taken a stand, speaking on our behalf, in support of something that a great many of us are so passionately against,” Seifman said.

According to Leitner, BDS movement members want to improve lives of Palestinians in occupied territories but do not take into account the lives of Israeli citizens and the Israeli point of view.

“Pro-BDS individuals also speak at length about improving the lives of Palestinians in the occupied territories, but don’t spare even a word for the lives of Israelis living with a constant threat of terrorism,” Leitner said.

“We are in no way discriminating against Jewish people nor those of Israeli national origin,” Milner-Brage said. “We are criticizing Israel’s government and military actions.”

According to Seifman, UAW 2865 should not be involved with a BDS matter and instead should focus on improving benefits for university workers instead of making statements on foreign affairs.

“We do not pay dues so that the union can be involved with every single political issue that occurs around the world,” Seifman said. “Money is not being spent on working towards securing good working conditions for us, the union members.”

However, a statement by the BDS Caucus of UAW 2865 affirming a supportive position on the BDS movement states that the union bares a responsibility to address the Israeli-Palestinian issue and others like it.

“We continue Local 2865’s solidarities with other anti-racist, anti-colonial labor and student movements globally,” the press release states. “By voting YES, we affirm our solidarity with all those striving for peace with justice for all the land’s inhabitants.”

It’s largely symbolic, because the Regents have no intention of participating in BDS. The stakes for the UC are too high. The Republicans (who now control Congress) have, in the past, made it clear they will pursue legislation that would mandate pulling federal funds from any university that supports BDS-that means federal financial aid, grants, et al.

To those who will argue that federal funding is a “right” I can only say the Constitution mentions no such right and the saying “what the government giveth it can take away” comes to mind.

Sadly, it succeeded at most UC campuses, failing only at Santa Barbara and Irvine. Though concrete impacts, if any, have yet to be seen, nominally the UAW 2865 now, as the result of the vote, officially stands in support of the BDS movement.