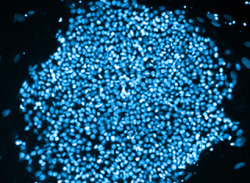 Researchers led by UC Santa Barbara Molecular, Cell and Developmental Biology professor James Thomson recently found a way to hold mouse stem cells on the threshold of differentiation, allowing them to self-renew and produce blood and vascular tissue in a dish.

If pursued, this research concept could be applied to other cell types and lead to widespread therapeutic and research advancements. The findings will appear online Dec. 9 in Stem Cell Reports.

Thomson, an adjunct biology professor at UCSB and tenured professor at the University of Wisconsin at Madison (UWM), is also co-director of UCSB’s Center for Stem Cell Biology and Engineering as well as Director of Regenerative Biology at the Morgridge Institute at UWM. He was featured on the cover of Time magazine in 2001 following his isolation of embryonic stem cells in 1998.

The research team investigated progenitor cells, the “children” of multipotent stem cells. Progenitor cells are more specialized than the parent stem cells they originate from and closer in development to their target cell type. They typically can only divide a limited number of times before being consumed in the process of differentiation.

Thomson and his team identified six transcription factors that collectively allow the stem cells to maintain a hemangioblast state in a culture. A hemangioblast is a type of progenitor cell that eventually develops into a blood or vascular cell type such as the tissue that makes up blood vessels.

David Vereide, the lead author of the study and Morgridge Regenerative Biology fellow, said that these cells differentiate early in development.

“Hemangioblasts are thought to arise briefly during development and then vanish as they are used up to become blood or vascular cells.”

Through harnessing the process’s transcription factors, Thomson and his lab succeeded in pausing the developmental process of the hemangioblast, capturing it in a nearly immortal state. The cell was allowed to differentiate only when the researchers inactivated the transcription factors.

“We found a way to interrupt this process so that the hemangioblasts remain undifferentiated and proliferate in a dish,” Vereide said. “Then, whenever we want, we can allow the cells to differentiate into blood or vascular cells by shutting down the six factors.”

If other progenitor cell types can be made to proliferate in a dish through regulation of their transcription factors, the research could have a major impact on stem cell research as a whole. Since the progenitor cells are closer to their destined cell type, using them in research and medical practice allows researchers to cut out the time and energy normally spent getting the cells to the brink of differentiation. Regulation of the six transcription factors also allows the cells to self-renew, further speeding up the process.

According to Vereide, this breakthrough can be viewed as a proof of principle in that the molecular mechanisms uncovered could be applied to other progenitor cells.

“I think it says that there might be a number of useful types of progenitor cells that can be made to expand in a dish by tinkering around with their core transcription factors,” Vereide said. “These expandable progenitors could then be used for drug or toxin screens, for basic research or perhaps even for cell-based therapies.”

The next step is to focus on human cells.

Dennis Clegg, an MCDB professor and Wilcox Family Chair in BioMedicine, worked with Thomson as co-director of the Center for Stem Cell Biology and Engineering. He said that Thomson’s research and influence on the UCSB campus has been invaluable.

“For Santa Barbara, his involvement has been amazing. It’s really transformed stem cell research on campus to have his leadership here,” Clegg said.

Thomson is among a worldwide network of stem cell researchers that are improving our understanding of disease mechanisms and cellular therapy.

According to Professor Clegg, the benefits of continued advancements in stem cell research include regenerative medicine and research applications. Already, personalized stem cell medicine allows researchers to study affected patients free of risk by growing diseased cells in a culture.

“Human embryonic stem cells are a way to study humans in a dish. You can grow any cell type, you can make different organs in a dish and study them,” Clegg said. “I think it’s going to revolutionize medicine. The future is bright.”