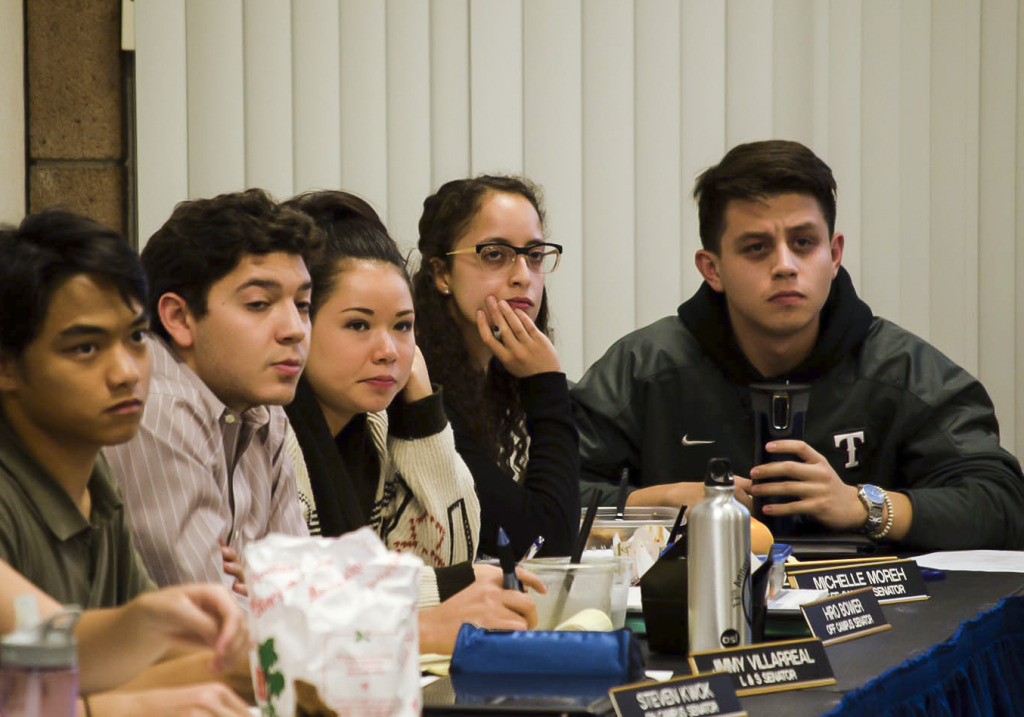 Members of the Associated Students Senate listen to issues during this quarter’s final meeting. Some of the issues discussed include funds allocated to student groups and A.S. Bike Commission updates. Will Tran/Daily Nexus

Senator Liam Stanton introduced a bill revising A.S. Legal Codes stipulating that A.S. funded events must be approved two weeks in advance, must advertise that the event is being funded by A.S. and must limit student groups to $500 in funding for food items per year. Controversy arose regarding some of the bill’s language, with several Senators and members of the Greek community objecting to the bill and a clause that read, “It has occurred in the past that organizations normally associated with suspicious affluence have used student fees through ASUCSB to prop up their bottom line.”

Dom Pietro, a member of the Phi Beta Pi sorority, voiced her concerns that Greek philanthropic events would not be possible without money allocated by A.S.

“We have two events on campus we do, and those are both funded by A.S. Finance Board,” Pietro said. “In our budget we have a fundraising expense and we use that whole entire budget for both of these events but it wouldn’t cover it even a little bit without you guys.”

Senator Stanton responded to criticism of his bill by emphasizing his flexibility on the exact specifications and wording of the bill.

“This bill is not targeted at Greek life,” said Stanton. “I am more than happy to play with it, to amend it, to turn it into even a totally different idea so long as we don’t spend money where it doesn’t have to be spent.”

Simons replied that it is unclear if an event will occur during Deltopia due to difficulties securing adequate backing by university administration.

“With Halloween we set a precedent that a school student group can effectively change the culture,” Simons said. “With that though comes a double-edged sword with the administration thinking that there is things that they can do that we will just do … I’m hoping that we can help facilitate something for Deltopia but ultimately it’s up to the administration working with us to make that happen.”

Vice Chair of the A.S. Bike Committee Mac Kennedy also outlined some of the bike-related projects occurring on campus. Kennedy said that a roundabout is planned to be installed at the intersection near the Student Affairs building as well as a repaving of the roundabout near the Student Resource Building due to protruding tree roots.

Kennedy also expressed frustration with trying to replace the concrete strip of bike path between Girvetz Hall and the Music building with asphalt so as to prevent flooding.

“It’s going to be a horrible project because there is plumbing underneath the whole thing,” Kennedy said, “So we’re getting a bid on that right now. It’s going [to] cost a lot.”

A version of this story appeared on page 4 of the Thursday, December 4, 2014 print edition of the Daily Nexus.