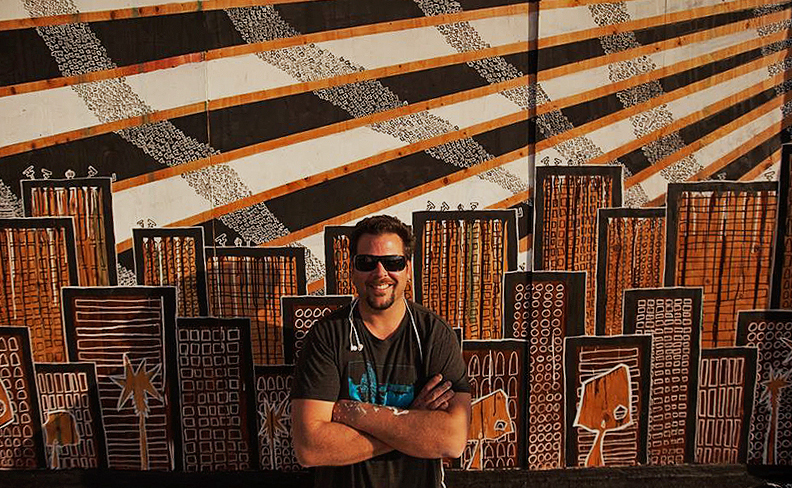 In downtown Santa Barbara, beautiful artworks and murals cover building walls and fences, surrounding the areas close to the beach. There you may catch local artist David Diamant showing off his latest works. But what sets Diamant apart from other artists is his use of recycled materials. From mediums like plexiglass to wood-all waste materials, the artist converts discarded remnants into art. “I was looking on Craigslist because I couldn’t afford paints and canvases. I needed materials to create and this guy had a bunch of plexiglass that he was getting rid of and didn’t want, so I grabbed [it],” Diamant said.

His designs range from small plexiglasses to large scale murals that could take up an entire wall. Lines of acrylic pen connect together to form cityscapes and arrows. Muted colors such as black and white harmonize together to distinguish contrasts between lines and space.

For his more colorful artworks, the Santa Barbara native takes the aesthetics of the local sunset and ocean to the next level by incorporating ombre hues of oranges and blues which outline the gorgeous scenery. In his abstract work, magenta and pink column lines offset the darker, grainy wooden background. Diamant draws his subjects on plexiglass and place it on top of wood to create a drop shadow feel. The subjects transfix the viewers’ eye and the drop shadow gives the paintings more depth and dimension.

Though successful now, visual art was not the artist’s first interest. His first foray into the artistic world was photography. Growing up he was inspired by his father, who was a skillful cameraman. “I grew up with photography. My dad and I made a dark room out of a closet and he was really into photography and I was doing chemical processing, 35 mm black and white,” Diamant said.

The last time the 41 year old learned about art in a classroom setting was in the sixth grade, and he hasn’t taken an art class since. It wasn’t in his plans in college, either. At University of Colorado Boulder, he studied English and Communications, followed by graduate school to study Organizational Communications at the University of New Mexico. Artistic ambitions started to seep in during college breaks, when Santa Barbara native traveled to Europe and discovered fascinating street art from cities such as Paris, Barcelona, and Florence.

Diamant’s artistic drive did not fully kick in until he moved to Los Angeles and lived with painter/animator Daniel Longfellow, who inspired and encouraged him to pursue a career in art. “My roommate at the time was a student at CalArts, a ginormous influence. He was a classically trained painter, then he got into animation,” Diamant said. “He encouraged me to go forward and do whatever. He said ‘It doesn’t matter if you aren’t feeling it, or feel a certain way later, just do, do, do,’” With the nudge forward from his roommate, the renewed artist moved back to his hometown in Santa Barbara and began a life focused on art.

Nowadays, the resourceful artist spends his time going around town, asking people for recycled materials to create with and inspire his next artwork. Most people are astonished when they realize that their “trash” could be turn into art. “People are stoked to give items to me. They are like ‘Wow you will use these to create? Because it’s just trash to me,’” he recalled. “It’s like, you know, one man’s trash is another man’s treasure.”

When people purchase an original piece, Diamant is often surprised at how they view and admire his work. “Sometimes people send me a picture where my artwork is between a Van Gogh and a Miró and I’m just like, shut up, that’s amazing,” he laughed. Because his art is built around recycled material, people are also keen to point out the imperfections that come with the canvas. “I’ve had some people buy my stuff and they’ll ask ‘Hey can I get it without scratches, or holes?’ And they want to me fill those holes, but it’s actually how the plexiglass came because it is a part of the recycled history,” said the artist.

The plexiglass pieces are featured in major galleries downtown, including the Santa Barbara Arts Foundry in the Funk Zone. Diamant spends a lot of time in the Funk Zone, an area where numerous art galleries are all aligned next to one another to form a creative community. It’s been a supportive place, and he is always thrilled to see people’s reactions to his work.

“I think it’s crazy how I can come up with an idea in my head and I actualize it to physical matter, and someone gives me money for that. I get stoked over it, I can pay my bill!” he said. “That’s just amazing and insane and I’m so thankful.”

While he may looked like a veteran artist, David Diamant is at the beginning of his career. His latest venture is to find a studio of his own to create more art in. More importantly, he’s looking for a place to store more newfound “treasures” that he encounters along the way.