The Daily Nexus
News
Methamphetamine Users High in Santa Barbara
December 4, 2014 at 5:00 am by Josh Ortiz 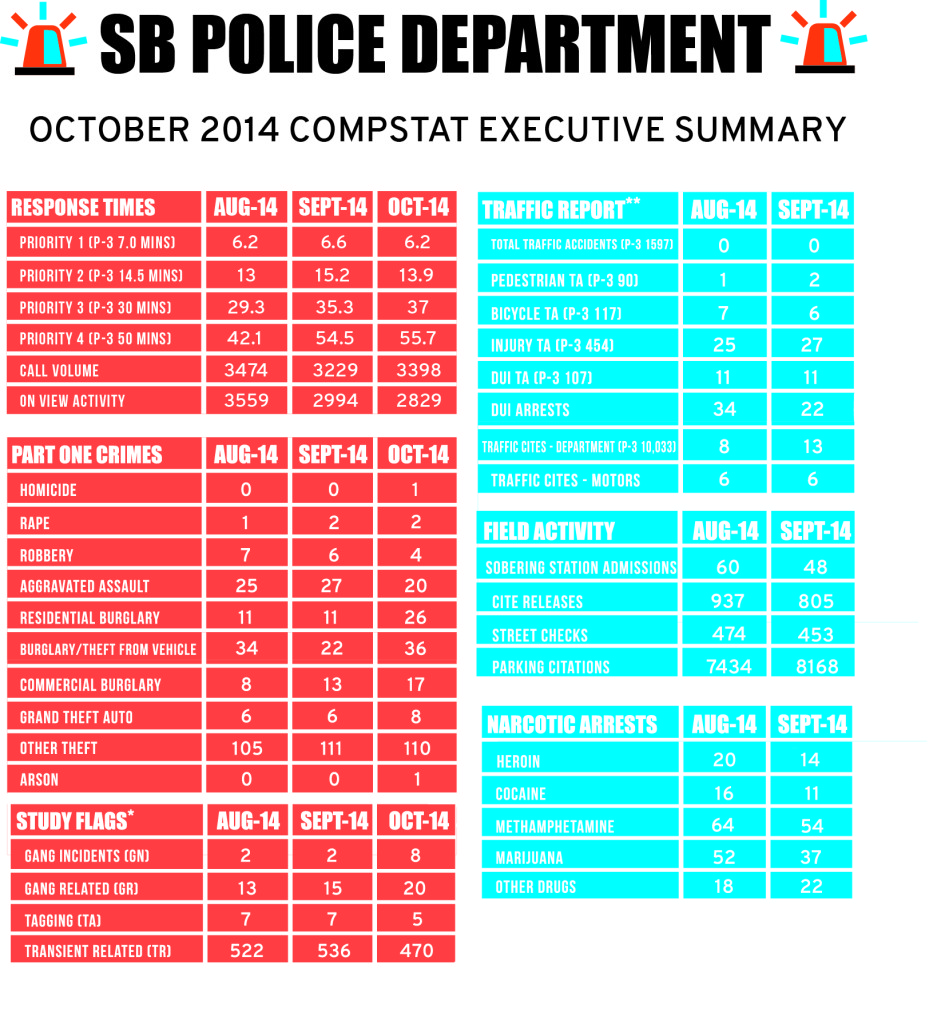 The Santa Barbara Police Department (SBPD) reported that methamphetamine has become more prevalent on the streets of Santa Barbara as compared to other illegal drugs abused in the region such as marijuana, heroin and cocaine.

SBPD’s Narcotics Unit released arrests records over the past year that show methamphetamine-related arrests have exceeded arrests related to all other drugs and that at one point in the year, there were six times more meth arrests than those for cocaine and heroin.

According to SBPD Narcotics Unit supervisor Sergeant Dan McGrew, methamphetamine is currently manufactured more efficiently in Mexico than in previous years, causing an increase in supply and a decrease in the drug’s price. McGrew said he attributes the increased emergence of methamphetamine to its currently low price.
“Now [meth] is cheaper, more available and people are addicted to it,” McGrew said.

McGrew said the upsurge of methamphetamine in Santa Barbara makes SBPD anxious that property crimes will rise given that statistically, addicts are disproportionately involved in crimes such as theft, burglary or vandalism.

“[The increase in meth usage] should be concerning to everybody,” McGrew said. “There’s concern that there’s going to be an upsurge in crime rates across the board.”

SBPD spokesman Sergeant Riley Harwood said police officers often find children living in drug houses, making the increase in methamphetamine a particular threat to local youth. Harwood also said drugs such as methamphetamine are often found in places accessible to young children, which is an issue SBPD is making a priority to address.

“A thing that has been a focus for us is children that we come across in a lot of these drug houses,” Harwood said. “We’ve been very aggressive about pursuing cases of child endangerment.”

According to Harwood, SBPD aims to focus on arresting distributers of moderate quantities of methamphetamine in response to the recent drug increase.
“Generally, our plan of action is to go after mid-level drug dealers who supply street-level drug dealers,” Harwood said. “We’ve been very proactive about that.”

McGrew said SBPD Narcotics detectives plan to decrease methamphetamine’s prevalence by limiting its influx into Santa Barbara.
“We want to make it difficult to bring in drugs,” McGrew said.

McGrew said he advises residents to help decrease methamphetamine usage by working to get family members treated who are afflicted by the drug.
“If you have family members that are addicted, work toward getting them off,” McGrew said.

Alcohol & Drug Program Director Jackie Kurta said treatment for methamphetamine addiction is lengthy due to its consequent mental and physical damage to its abusers.

“Treatment is intensive and often involves a detoxification process,” Kurta said. “It tends to be the kind of drug that is a very highly addictive and highly toxic substance.”

According to Kurta, addicts experience a dependence on the substance that supersedes all other basic needs such as food, bathing and sleep. She said other side effects include aggression, hyperactivity, loss of teeth and skin sores.

“No good comes out of this drug,” Kurta said. “It destroys families and societies.”

A version of this story appeared on page 5 of the Thursday, December 4, 2014 print edition of the Daily Nexus.