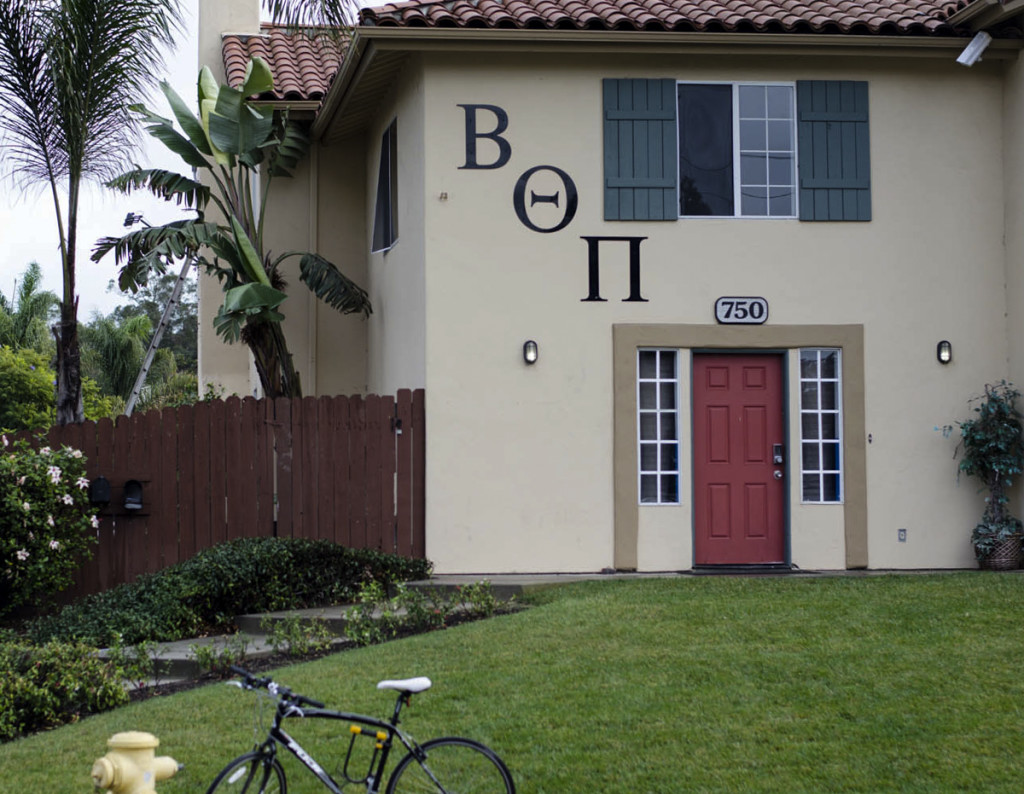 Beta Theta Pi’s chapter house in Isla Vista. Although the UCSB chapter was
suspended, the current residents will be able to keep living on the property. Will Tran/Daily Nexus

The Beta Theta Pi General Fraternity closed the Beta Theta Pi UCSB chapter earlier this week after the chapter incurred a disciplinary action in the context of several incidents in recent years, particularly for alleged hazing and forced alcohol consumption.

The UCSB chapter of Beta Theta Pi was made up of 73 current members and 29 new members that were to be initiated this fall. The Beta Theta Pi General Fraternity closed the UCSB chapter due to allegations regarding an incident in which a fraternity member was hospitalized due to overconsumption of alcohol.

President of Beta Theta Pi’s UCSB chapter and third-year economics and accounting major Roberto Pregadio said the chapter was shut down after five years of trouble, dating back to before he was a member.

“From my point of view, it was a variety of reasons — it wasn’t just one thing. The national fraternity cited a history of behavioral issues of the past, dating back to about five years,” Pregadio said. “Over the past five years, it has been sort of a cycle of probations, suspension, warning, probations, special warnings and so on — so all of this stuff kind of adds up to a case against you.”

Pregadio said after years of issues and reprimands, an incident this quarter finally lead to the fraternity’s closure.

“The background is five years’ worth of getting in trouble and stuff, but the last straw actually happened this quarter and it is actually extremely alarming just the nature of the incident.”

Pregadio said the most recent incident of two pledges being taken to the hospital for drinking too much was not hazing related.

“They immediately thought it was a hazing, a hazing allegation regarding forced alcohol consumption — when actually none of this happened,” Pregadio said. “Regardless of whatever they found, if it was hazing or not — which it wasn’t — the fact that can’t be over looked is the fact that we are being punished for taking care of others.”

Pregadio said he thinks the decision may create situations where students do not take their friends to the hospital because they are afraid of the consequences.

“I believe this is going to set a precedent that people are going to be in risky situations and they are not going to take their friends to the hospital because they fear punishment,” Pregadio said.

According to Beta Theta Pi General Secretary George Schmidt’s official statement regarding the closure, if a chapter is unable to adhere to the fraternity’s principles, the national organization must step in.

“As has been the case for more than 175 years, Beta’s primary mission is to develop men of principle for a principled life and build strong Beta chapters across North America,” Schmidt said. “However, when the men in a chapter are unwilling or unable to demonstrate self-governance and adhere to Beta’s principles, the Fraternity’s leadership and host institution must intervene in order to protect the well-being of all individuals and ensure a successful long-term presence on campus.”

Pregadio said that the national chapter and the Office of Student Life took action based on concerns of legal liability.

“They are watching their backs, they are thinking of the chapters as a liability,” Pregadio said in an e-mail. “We are viewed as a liability more than an asset.”
Pregadio also said the “true issue” behind the alleged hazing lies in “the UCSB culture and its corrupt student organization system.”

“The Greek community is easy to use as a scapegoat when issues arise on a high-risk campus like ours (a campus with alcohol issues, shootings, sexual assaults, riots, etc.),” Pregadio said in an email. “The system would rather point fingers at outside organizations like ours and make examples out of them instead of tackling the campus culture issue head-on.”

Inter-Fraternity Council (IFC) President and third-year biopsychology major Carl Provenzano said he is worried about the risk management in Greek life on campus and throughout the country.

“This isn’t an isolated event. This is nation-wide,” Provenzano said. “We are hearing about it almost every day. Another chapter gets in trouble for sexual assault [or] hazing allegations, and it is terrible. It is a big wake up call for the chapters that are on campus, not just fraternities, but sororities all across the board, as well as student groups.”

Provenzano said there was nothing the IFC could do to stop the chapter from closing, but that Beta Theta Pi has the option to re-charter in several years, and Beta Theta Pi pledges are free to join any other student group since they did not initiate.

“They can certainly re-charter if sometime in the distant future if they have an interest group … but there is no way, nothing that I could do or the school could do to kind of push it in their favor,” Provenzano said. “It was a national organization and the lack of communication between them and the Beta chapter was what caused their downfall.”

Pregadio also said while it is easy to point fingers at the greek community, the real problem lies in the officials that made the decision.

“[Officials] are simply trying to lessen the liability, but they have affected the lives of over 100 and 400 previous alumni members,” Pregadio said. “Regarding housing for most of the fraternities and sororities, they rent the houses as individuals so the lease is still there and the Betas can keep living in the same house. We are all automatically alumni members of Beta Theta Pi. Basically there is this motto, ‘Once a Theta, always a Theta.’”

Director of Student Life Miles Ashlock said he is not yet sure how to react to the decision.

“It has kind of initially emerged. There is going to be a public announcement, which is typical after one closes, just to make the campus aware of the closure,” Ashlock said. “The email won’t be about what happened, but it will confirm the action of the nationals. So I’d expect that to go out most certainly by the end of this week.”

A version of this story appeared on page 1 of the Thursday, December 4, 2014 print edition of the Daily Nexus.

A couple of factual errors:

1. The name of General Secretary of Beta Theta Pi is David Schmidt, not George Schmidt.

2. The unofficial saying is “Once a Beta, always a Beta, everywhere a Beta”. But it is definitely NOT “Theta”.

I find it funny that the president of Beta denies the responsibility of what happened concerning excessive drinking/pressure to drink, yet when I walked by Beta house today at noon (NOON!)they were already in the middle of snappa, music blaring and a bunch of guys cheering on. And as 3 guys left on bikes, I could hear the snappa group shouting insults/obscenities at them for leaving instead of staying to play. They’re not hiding anything now.

But that being said, it can exist outside the university sysem as an independant Beta house full of asses with a common value system. Then the IVFP can roll in and hook-em up and send em to jail.