The Daily Nexus
Music
Magnets & Ghosts EP Be Born is Perfect for Winter Nights
December 2, 2014 at 12:00 am by Kelsey Tang 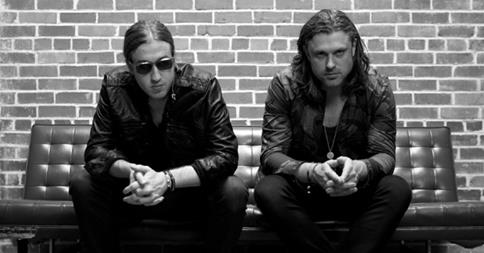 With the cold this article is going up in December winds momentarily wiping out the sweet and sunny days here at UCSB, it’s time to exchange that ready-for-the-beach playlist for something a tad more pensive and dark. Here to succeed the exchange for upcoming winter chills is Magnets & Ghosts’ EP, Be Born.

Alternative rock band Magnets & Ghosts emerged in the industry after band members Dean Roland and Ryan Potesta found that they shared similar music preferences in 2007. Since then, the duo has released debut studio album Mass and recently followed up with EP Be Born. The Georgia-based band cites Radiohead and Doves as musical influences, so be sure to expect similarly gritty and moody anthems.

Be Born opens up with self-explanatory track, “Intro,” a minute-long instrumental featuring the charming chuckles and incoherent mumblings of anonymous individuals. As the track eases into the second song, “Off My Mind,” a breathy voice reassures listeners that pain is essential and love is harrowing. The lyrics are simple and honest, a fitting reflection of the band’s down-to-earth image. The song’s candid approach to themes of recovery and time serve as sympathetic consolations that abandoning a love might just be for the better.

Following the tender reminders of “Off My Mind” is the abrupt transition into a fast-paced, guitar-heavy track titled “Drug Money.” Here Magnets & Ghosts prove their musical excellence by incorporating a brief guitar solo, reminiscent of late nights teeming with angst and tension. Already three tracks in and the duo has sufficiently illustrated their musical flexibilities, beginning the EP gently and calmly and then slipping into a rowdier, harsher mood. Those that thrive in tunes that spew rage and resentment will find “Drug Money” fitting enough to play on long road trips, zipping through the biting cold weather.

The fourth song makes time to mellow out for the hopeful and heartfelt. While the chorus in “Here to Save Me” wishfully chants out seeking a savior, a layer of incessant backup vocals coos woefully. What distinguishes this song from the others is the vocalist’s subtly trembling voice, inducing the audience to recognize his flaws and vulnerabilities. “Here to Save Me” is for those contemplative and solitary nights staying in, withdrawn from any exterior influences and basking in unruffled seclusion.

“Hide the devil / as far as I can see,” sings out in a dispassionate tone supplemented by pounding drums. “I’m Not the Devil” touches on themes of rebellion and heartlessness, a complete reversal from the previous inspirational tune. Magnets & Ghosts display an unparallelled versatility in the broad genre of alternative rock. Another guitar-heavy but slower track “Ascension” trails after, followed by the concluding confessional “Be Born.” The last track encompasses the band’s underlying message of discovering peace into one song brimming with ethereal sounds and soft vocals.

The EP lacks fluid transitions in between particular songs but compensates for this blemish by evoking deep vulnerabilities. On the other hand, the rocky transitions could reflect the capricious and imperfect emotional upheavals we frequently encounter. Listening to the EP chronologically without interruption also reveals a clever and subtle transitional loop which bridges the last track back into the first, allowing an innumerable amount of smooth replays for this cold season.

Magnets & Ghosts’ Be Born aims to accommodate those departing from the searing sun. It’s a soundtrack for gray days and brisk nights, wintry drives and glowing bonfires.