The Daily Nexus
Music
More Rock than Sand: Foster the People Play SB Bowl
December 2, 2014 at 12:00 am by Spencer Phillips After superb opening acts by Soko (“We Might Be Dead By Tomorrow”) and Sylvan Esso (“Coffee”), Foster the People’s last show of their North American tour was set to be a blast. Held at the Santa Barbara Bowl, the performance entailed stunning and varied song choices from their new album, Supermodel, sprinkled with favorites from Torches. The only odd notes of the night were Mark Foster’s speeches which — though neither rote nor insincere — hit the expected marks a little too steadily.

Situated in a set vaguely reminiscent of a spaceship, Foster the People and their three touring musicians — Isom Innis, Phil Danyew and Sean Cimino — blasted into a quick and rousing rendition of “Pseudologia Fantastica,” a song from Supermodel. The song had steady drums and a smooth beat enhanced by lighting that switched from cool-blue wash to beams of purple and white. Arcing riffs soothed and united a crowd that was in turn joyous and sometimes merely attentive.

The crowd was, as expected, a weird mix. There were the hordes of 20-somethings, a certain amount of families accompanying young teens and an unexpectedly sizeable contingent of gray-haired Santa Barbara residents.  While the 20-somethings largely occupied the standing general entrance area directly in front of the stage, families and residents intermingled in the assigned seating that was offered for 20 dollars more. The extra cost certainly didn’t hinder their enjoyment, as evinced by the gently aged woman to my right who, despite being pulled straight from Red Riding Hood, was gamely going at it with a hybrid fist-pump and cat-pawing gesture.

Rivaling the variety in the crowd was the variety in song selection. Where Torches had a beachy, rainbows-and-happiness feel, most of the songs chosen from Supermodel had stronger elements of rock and a more meditative air while still retaining the electronic aspects, approachability and variety that is Foster the People’s strong point. The set list — both for this concert in particular and the average set list for the tour, compiled by setlist.fm — focused on reinforcing this impression by weaving the more rock-ish songs from Torches with the full spread offered by Supermodel. 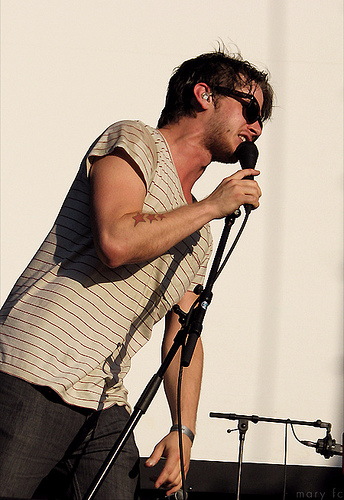 Following “Pseudologia Fantastica” was the first of Mark Foster’s speeches, a stretch of the more common platitudes that bands tend to say when they start a concert, like “you know, Santa Barbara has always been one of my favorite venues,” a tactic sure to get measures of applause.

Actually, I’m not sure if the speech happened after the song or as soon as Foster entered the stage. Either way, the words were less remarkable than the fact that his hairstyle looked remarkably similar to that of UCSB alumni Trevor Crown. To Foster’s credit, he quickly moved on into the next song, “Miss You,” which was played differently from the studio version available on Spotify and was a rather rousing performance that enhanced the measure of excitement his speech had evoked.

Following “Miss You” was “Life on the Nickel,” which was as different in concert as its preceding number. Foster’s rough voice and the energy of the crowd gave “Life on the Nickel” a grittier feel, making it truer to the heart of the song, which is the idea that one is born from struggle, strife and living “on the nickel.”  Perhaps these lyrics derived from Foster’s past experiences, but either way, the song wasn’t the smooth voice and chorus I’m used to.

Skipping ahead past “Helena Beat” and “Waste,” “Coming of Age” and “Best Friend” were a pleasant surprise twist after the grittiness of the previous offerings. The darker attitude of “Coming of Age,” with its lyrics about unity and protectiveness and natural imagery was impressive and enjoyable. “Best Friend,” perhaps purposefully paired with “Coming of Age,” was slightly more lively and rough-edged, succeeding in its purpose of rousing the crowd once more.

Foster the People closed heir main set with “Don’t Stop.” Similar to “Life on the Nickel,” Foster’s roughened voice and the energy of the crowd and band transmuted this perennial studio piece, refurbishing a smooth, but somewhat tired crowd pleaser into a rock ballad, capped with a tossed tambourine and a quick exit to stage left.

The stage lights went dark, but as a neighbor whispered, not dark enough to mean they weren’t going to do an encore. And while the crowd did have to chant for a couple of minutes, Foster came out carrying an acoustic guitar on which he played “Fire Escape.” Sweet and slightly broken even in studio recordings, in person the song became magnetic — a quiet lullaby as much for himself as for the crowd. And while the rest of the band came out once again to play “The Truth,” a bent-over Mark Foster and a quiet lullaby was the only end I needed.