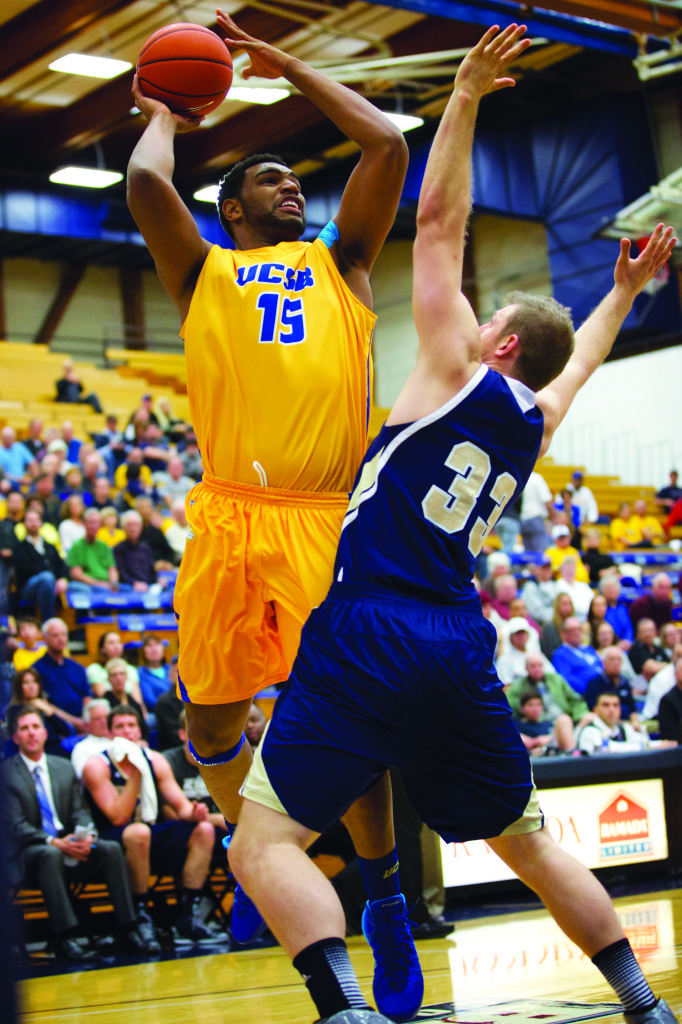 Williams had three double-doubles in the Great Alaska Shootout and was named the tournament’s Most Outstanding Player. (Daily Nexus/File photo)

The UCSB men’s basketball team finished in second place in the Great Alaska Shootout after losing to Colorado State 65-63 in the tournament final on Saturday. A pair of free throws decided the game after junior guard Michael Bryson attempted a steal, but was instead called for a foul with 5.9 seconds left.

The loss drops the Gauchos to .500 at 3-3 overall. Prior to the final, UCSB outlasted Mercer University in a 65-60 overtime game in the semifinals and easily defeated Washington State 71-43 in the opening round.

After leading Colorado State for much of the first half, the Gauchos trailed in the final moments of the second until junior guard John Green nailed a game-tying three-pointer with 10 seconds remaining. Santa Barbara struggled advancing the ball after the made free throws and a shot 30 feet out from senior center Alan Williams missed as time expired.

Redshirt senior forward Stanton Kidd led the Rams with 14 points and his teammate, junior guard Gian Clavell, added 13 points; their consecutive three-pointers capped off a 10-2 run in the second half that shifted momentum towards Colorado State.

Williams finished with 22 points and 12 rebounds for the Gauchos and ended with the third-most rebounds in tournament history with 44. His three double-doubles earned him the tournament’s Most Outstanding Player.

UCSB advanced to Saturday’s game after narrowly defeating Mercer the day before. The Gauchos blew a 10-point second half lead but redeemed themselves with a buzzer-beating trey by Bryson that sent the game into an extra period.

Junior guard T.J. Taylor found an open Bryson for this three-pointer that sent UCSB into overtime with Mercer.

In overtime, Bryson continued his three-point prowess and sunk a shot from long distance to extend the Gauchos lead to 60-54 with under three minutes left. The team from Macon, Georgia cut the lead to two, but four made free throws from junior guard DaJuan Smith clinched the game for UCSB.

The Gauchos had trouble controlling the pace of the game in the first half as Mercer succeeded in slowing down the tempo and turning it into a grind-it-out game; UCSB led 23-20 going into the half.

After being limited to only eight points in the first half, Big Al capped off the night with 22 points and 20 rebounds, tying a previous career-high in rebounds. Bryson finished with 17 points.

In the first round against Pac-12 opponent, Washington State, UCSB entered as favorites and played up to expectations as the team got out to a big lead. WSU suffered from poor shooting from the get go, helping the Gauchos take a 34-12 lead into halftime. The Cougars’ 12 points were the second-least points scored in a half in tournament history.

Santa Barbara continued applying pressure coming out of the break, with the Cougars never threatening.

Senior guard Zalmico Harmon had a season-high 17 points to lead UCSB and Green finished with 11 points coming off the bench.

UCSB returns home from Alaska for its next game this Thursday against Seattle University.