The Daily Nexus
Sports
Hot Shooting Propels UCSB to a Win in Home Opener
November 24, 2014 at 5:05 am by Mark Salay 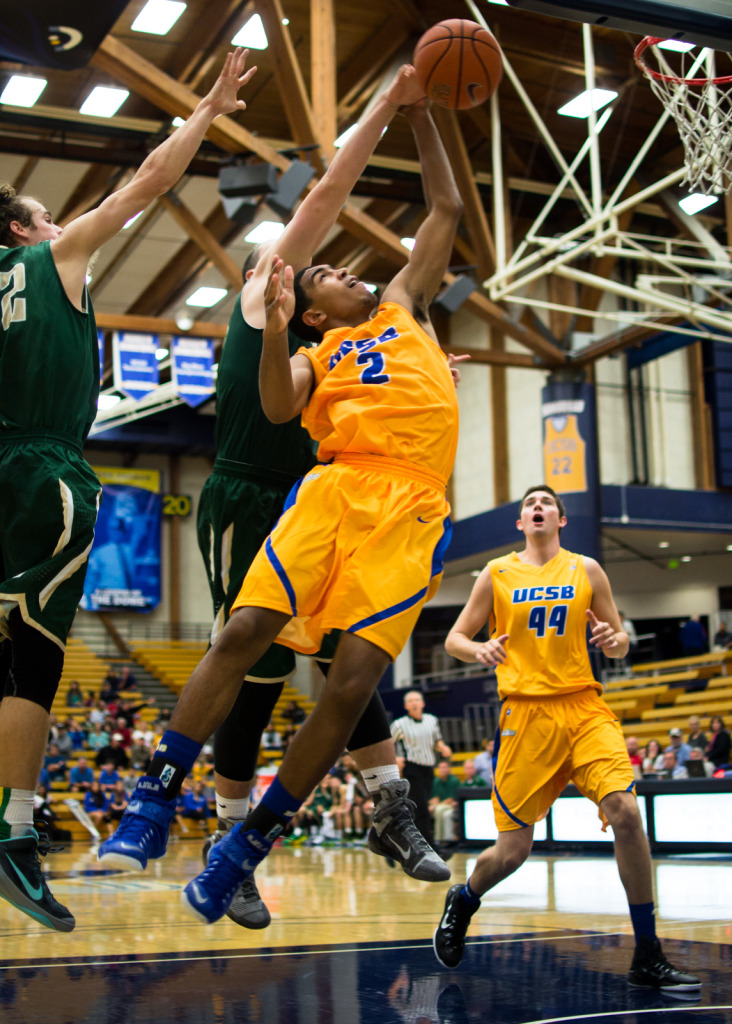 Fueled by a hot shooting performance, the UCSB men’s basketball team easily took care of business against The Master’s College Saturday at the Thunderdome. Led by a game-high 20 points from junior guard Michael Bryson, the Gauchos defeated the Mustangs 91-45.

UCSB picks up its first win of the season and is now 1-2 overall while The Master’s College drops its record to 2-1. The victory was much needed for Santa Barbara who came up empty on its two-game road trip against Kansas and Florida Gulf Coast University, despite each being close contests.

“We have a little streak going on now,” Bryson said. “We don’t have these two losses sitting on our backs. Whether or not it’s a bad team or not, getting a win is getting a win.”

UCSB controlled the game from the beginning and jumped out to a 14-4 lead in large part to its shooting. The Gauchos suffered from a shooting slump in their first two games, but it was a completely different story against the Mustangs.

Santa Barbara closed out the half leading 47-22 with the team making 52 percent of its shots from the field and going 5-8 from three-point range. Bryson scored 14 of his 20 points in the half, with him shooting an efficient 3-5 from long distance; in previous games, he averaged 25 percent from behind the arc.

Coming out of the half, UCSB wasted no time putting away its opponent and jumped out to a 17-1 run in the beginning minutes. The Master’s College best player, senior guard Russell Byrd, was bottled up by the Gaucho defense. Byrd was limited to 20 points and five rebounds, however, the defense forced him to turn the ball over 11 times.

Having a significant advantage rebounding and shooting well, the Gauchos led the game by as much as 34 points midway through the second half, eventually putting the contest out of reach.

“I thought we did several things pretty good,” Head Coach Bob Williams said. “We shot the ball well, we moved the ball well and we pretty much took advantage of them on the glass rebounding the ball well.”

Unlike in previous games, senior center Alan Williams had a relatively quiet game, finishing with 12 points and eight rebounds. Instead, the Gauchos relied on Big Al drawing the defense and serving as a distributor.

“They doubled down on [Williams] so much that he was able to find us and we were able to shoot well,” Bryson said. “The ball is going to go through him and we’re going to get good looks out of him because he’s the best player in the league.”

Junior guard John Green continues showing what he can contribute when healthy. Green scored 14 points, second most on the team, to go along with seven rebounds. Green’s scrappy defense and ability to shoot jumpers and take the ball inside were seen when he was on the court. It marked Green’s third game of the season, one game shy of his total games played his previous three years on the team.

“I feel better than ever,” Green said. “I worked really hard working off my injuries … It’s just a good feeling to contribute.”

Junior guard DaJuan Smith started the game in place of the injured freshman guard Gabe Vincent, who was held off because of a blister injury on his foot. Smith made the most of his start and scored seven points, but was the main ball facilitator with seven assists on the night.