The Daily Nexus
News
Protesters Convene in Storke Plaza for Rally on Tuition
November 21, 2014 at 3:23 am by Patrick Guardian 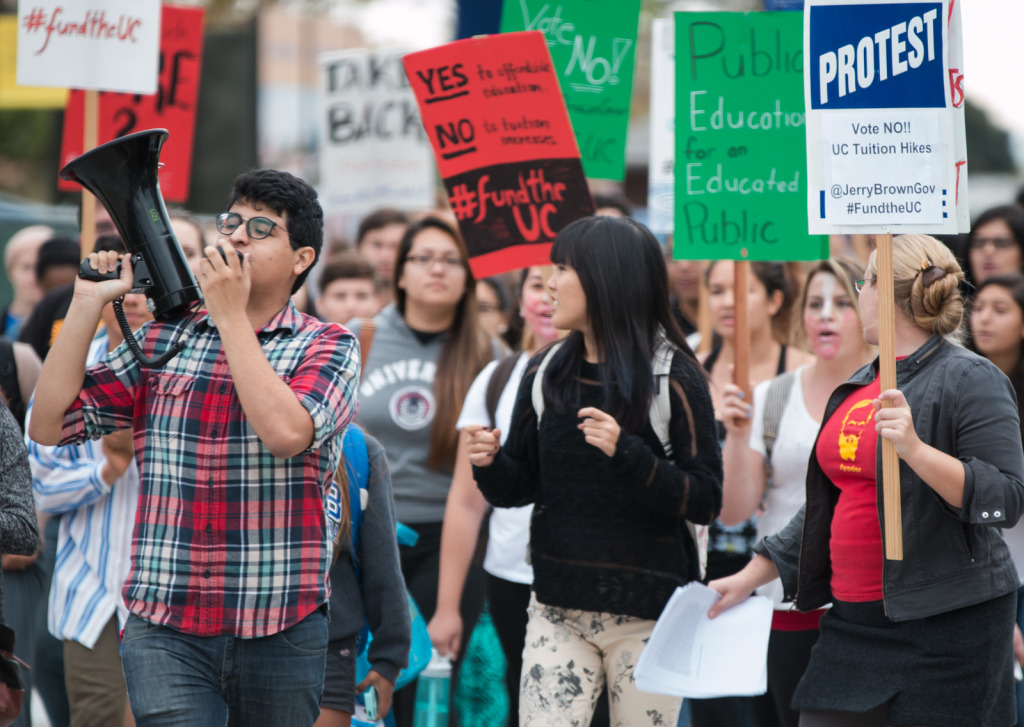 Students and faculty rallied at Storke Tower Thursday to protest the recently approved the UC tuition increase plan, which caps potential yearly increases at five percent over the next five years, in an event hosted by Associated Students.

Associated Students encouraged all members of the student body, faculty and staff, as well as the greater Santa Barbara area, to attend the protest and demonstrate their opposition to the tuition hike. The rally was followed by a march to Cheadle Hall, where protesters taped copies of a letter expressing frustration toward the UC to the walls, doors and windows on the top floor of Cheadle Hall, where Chancellor Henry T. Yang’s office is located.

According to California State Assemblymember Das Williams, money needed to avoid the tuition hikes is relatively small and that it is important for students to push the legislature to act on further funding the UC. 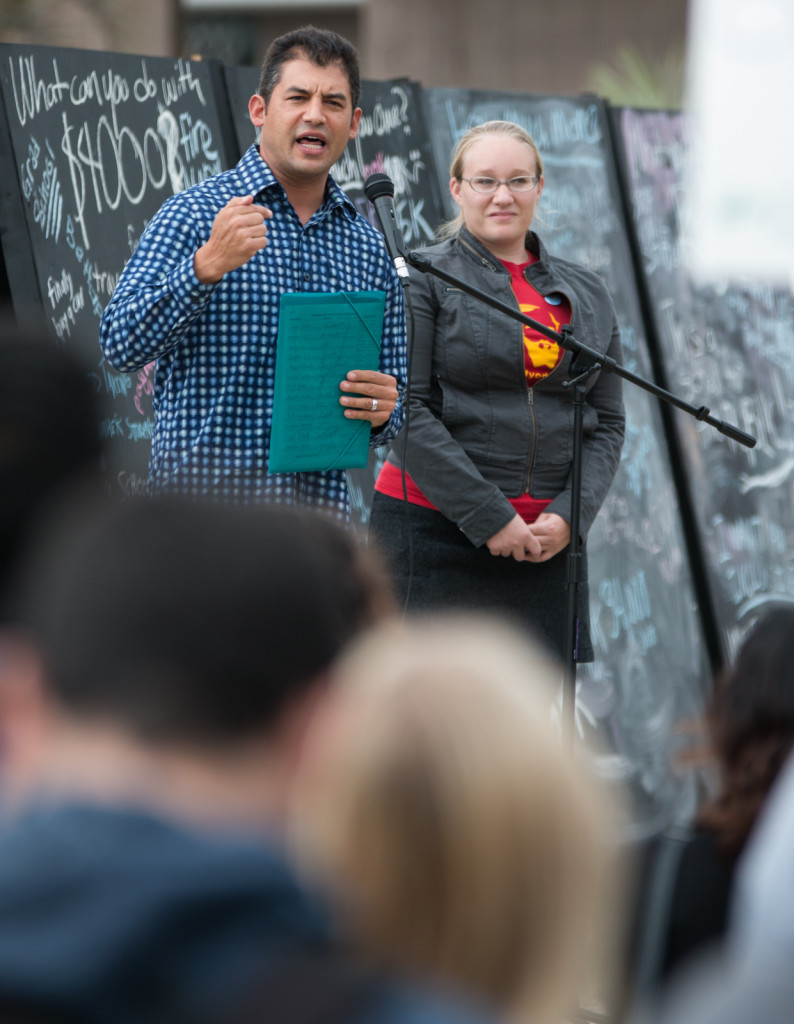 “We have to push,” Williams said. “I know there are a lot of you out here, but we need you to do more than just be here, because I need help. I need to be able to bring to the legislature and to the governor an overwhelming force from students, from UC and CSU unions, and make them realize how angry you are and how you are demanding a specific course of action, which is $100 million a year for the UC and $100 million a year for the CSU.”

According to Daraka Larimore-Hall, secretary of the California Democratic Party, who has lobbied for years in Sacramento for higher education funding and opposed all UC tuition increases, all members of the UC system must communicate to the Regents that students cannot be treated as “customers.”

“Now more than ever we have to provide that noise,” Larimore-Hall said. “Students, faculty members, staff, everyone in the University community, has to make their voice loud and clear to Sacramento, that not this time! This time, you don’t get to treat students as customers and cash cows. This time we need to tell the Regents no, absolutely not!”

According to Robert Samuels, lecturer at UCLA and president of the University Council-American Federation of Teachers, a union representing librarians and non-Senate faculty in the UC system, tuition could actually increase up to nine percent per year, depending on how much funding the UC system receives from the state.

“If you actually look at the plan that the office of the president presented, it says that there will be a maximum of 5 percent increases if the state gives 4 percent,” Samuels said. “Well, the governor, in his last budget, it clearly says if UC raises tuition, they lose four percent. So, it is possible that tuition will go up nine percent every year for five years. The plan that was presented is not predictable; it’s not sustainable.”

However, according to the UC Office of the President, the tuition increase plan actually stipulates a maximum possible increase of five percent annually for five years, depending on the level of state contributions to UC.

“The new long-term stability plan for tuition and financial aid would guarantee that tuition would not increase by more than 5 percent annually for five years, provided the state maintains its current investment commitment,” the UCOP Long-Term Funding Plan press release states. “The state could also choose to provide additional funds to cover tuition revenue, allowing UC to reduce or lower the tuition and fee increases proposed in this plan.”

But Samuels said many students are not paying tuition due to Pell Grants, Cal Grants and institutional aid, and thus it is within reason for tuition to be free, as long as the rest of the funding the school receives is used appropriately.

“We have to make sure that the money that comes from the state, and the money that comes from your tuition, actually ends up in the classroom,” Samuels said. “What we’ve seen in the last 10 years is tuition keeps on going up and classes get bigger. There’s fewer graduate student instructors, there’s less personal attention for the students, there’s more multiple choice exams. The quality of education has gone down.” 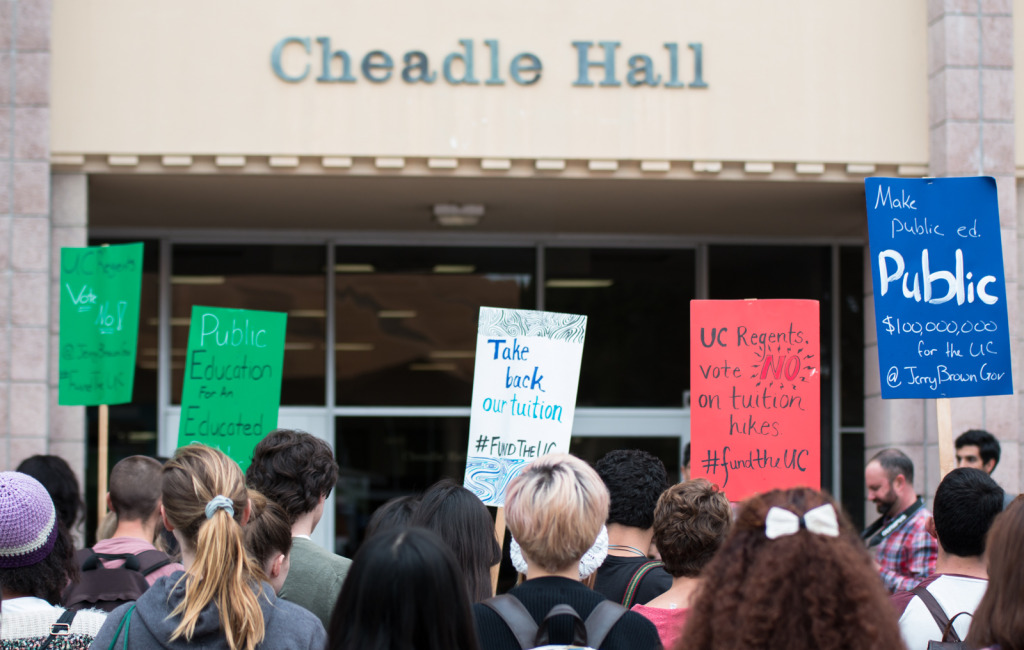 Protesters chant outside of Cheadle Hall after a rally against UC tuition increase that took place Thursday in Storke Plaza. Stephen Manga/Daily Nexus

A.S. External Vice President of Statewide Affairs Melvin Singh said students can do more than just rally to protest the tuition increase and that lobbying directly to legislators can be an effective form of action.

“Student activism not only entails protesting as most people think, but also getting spot at the table with decision-making,” Singh said in an email. “Students need to work together on efforts, like lobbying legislators, because they need to see us people they were elected to serve. This happens with human interaction. Fortunately, Associated Students has a Lobby Corps, and I’m sure with my office collaborating, we will all be busy this year.”

Singh, who attended the UC Regents meeting on Wednesday, said he learned that working with professors can increase the chances of lowering tuition costs, because students and professors are part of the same system.

“They too are affected by the quality of their work based on tuition increase and class enrollment,” Singh said in an email. “The human interaction from a professor is lost in a large classroom, and instead it feels more like professor spewing information at us instead of active and engaging learning. And they know this.”

Mohsin Mirza, a third-year sociology major and rally organizer, said the tuition increases represent a failure of the state to support higher education. Mirza said he blames UC President Janet Napolitano for not exploring options other than raising tuition and said Brown has not prioritized higher education funding.

“We are tired of public higher education coming at a private price,” Mirza said. “We are here because UC funding is too low a priority. We are not here to play political games of Jan Napolitano and Jerry Brown.” 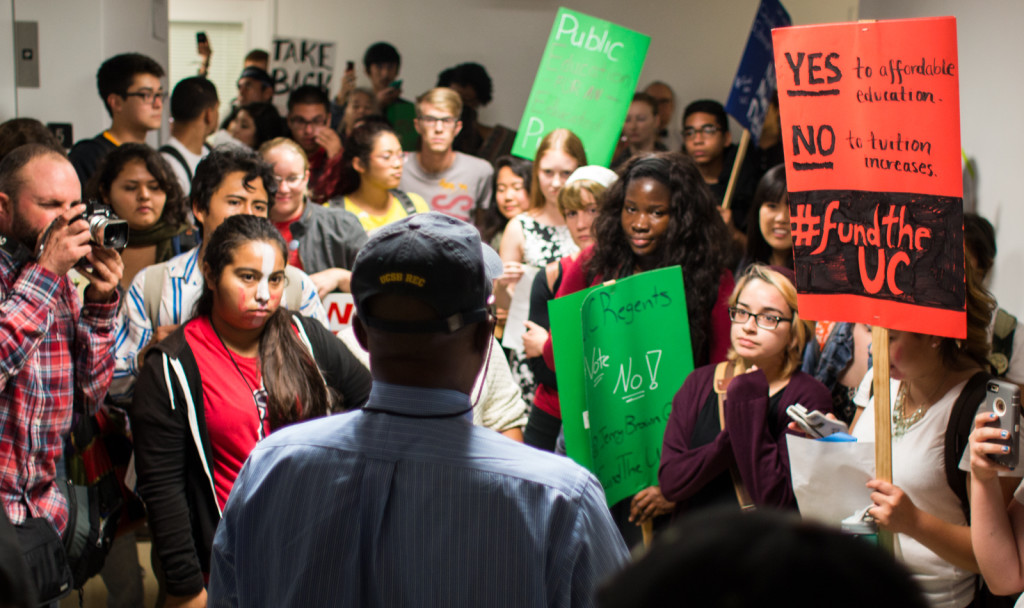 After the rally, the crowd marched to Cheadle Hall, where they climbed to the sixth floor, chanting in protest along the way. Faculty members and students joined in the march, increasing the crowd’s size.

Vice Chancellor of Student Affairs Michael D. Young eventually approached the protesters and promised to relay their message to Yang when he returns from the UC Regents’ meeting.

“I’m really pleased that you feel it important to share your view both with the UC Regents and with Governor Brown,” Young said. “I just want to urge you to continue this notion of making sure that the people have their say and that government really belongs to the people.”