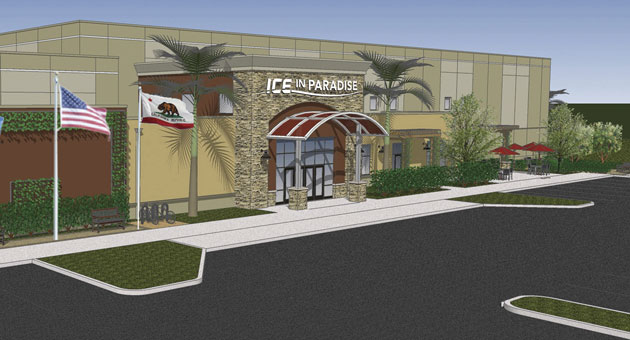 An artist’s conceptualization of the finished “Ice in Paradise” facility, which broke ground Thursday, Nov. 20 and is scheduled to open in September of 2015. Photo courtesy of Greater Santa Barbara Ice Skating Association

Featuring speeches from Mayor of Goleta Michael T. Bennett and GSBISA board members, the local non-profit held their ground-breaking ceremony for local residents and corporate sponsors. After the ground-breaking, GSBISA posed for pictures at the project site before bussing over to Deckers Outdoor Corporation, an event sponsor, for refreshments. Expected completion of the $15 million ice skating area project is slated for September 2015, with $11 million of the project slated for construction.

According to Sarah Feldman, alumna and UCSB Ice Skating Club founder, the club’s popularity will rise now that members will no longer need to travel down to Oxnard to skate.

The 46,500 sq. ft. arena to be constructed on Santa Felicia Road will have two rinks, an NHL-size rink and a smaller studio rink, both of which are available to the public. Amenities inside “Ice in Paradise” will include six locker rooms, a concessions area, a party room and a homework center.

GSBISA board member Dan Sweeney said he hopes many students will enjoy the rink when it opens next fall.

“We are really excited about UCSB students and their role in the rink here,” Sweeney said. “We think that the rink will be a great resource for them to come and have fun, whether they know how to skate already or not. For those who cannot ice skate, we will be offering broomball.”

Bennett said he fully supports the ice rink because it offers a safe place local teens to spend time after school.

“The rink will be a great place for not just for UCSB students, but for the youth in our community,” Bennett said. “School children in Goleta will be able to head over to the rink when school gets out and have a place to get some exercise and if they are not skating they will be able to get some work done in the homework center. I think we all cannot wait for Ice in Paradise to open.”