The Daily Nexus
News
UCSB Set to Build Housing on Storke
November 20, 2014 at 5:00 am by Teddy Krolczyk 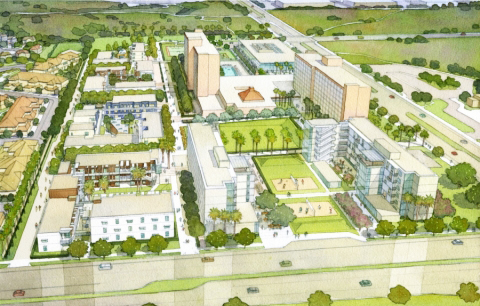 An artist’s conception of the planned San Joaquin apartments, next to the existing Santa Catalina Residence Hall, which includes new dining commons. Photo courtesy of housing.ucsb.edu

Official construction of the village, located on Storke and El Colegio road, will begin in December with completion planned for Fall Quarter 2016. Designed for upper-division undergraduate students, the apartments will include three bedrooms, two bathrooms, a kitchen, a dining area and a living room. The complexes will also have study and recreation rooms, a small convenience store and a new dining commons. Additionally, on-site amenities will be provided to residents, including a playing field, basketball courts, sand volleyball courts and access to the existing swimming pool at Santa Catalina Residence Hall.

According to Julie Levangie, Multimedia Communications and Marketing Coordinator, the project will provide new housing for approximately 1,000 students, as well as four new residences for faculty members in the Faculty-in-Residence Program and renovations to the Portola Dining Commons inside Santa Catalina Residence Hall.

“We are very excited that the San Joaquin Apartments and Portola Dining Commons project has been approved by the Coastal Commission,” Levangie said. “This supports the terms of the recently approved Long Range Development Plan and its call for an increase in student housing.”

Levangie said the project will meet the high standards of sustainability and environmental regulation associated with the university.

“Housing and Residential Services strives to be good stewards of the environment and supporting UCSB on its way to becoming a sustainable community,” Levangie said. “The project has several sustainable design measures including storm water retention basin, energy efficient windows, and energy-star appliances for all kitchens.”

According to Senior Associate Vice Chancellor Marc Fisher, the efforts to make San Joaquin Village sustainable will also include water and energy efficiency and reduced vehicle use on campus through an additional 24 Express bus line established in cooperation with the Metropolitan Transit Authority.

“We will be using reclaimed water extensively, using the most up-to-date lighting technology, and naturally ventilating all of the living spaces,” Fisher said. “The project works to improve pedestrian and bicycle circulation in and around the site including street improvements on Storke and El Colegio Roads.”

Fisher also said the San Joaquin Village’s building style will center around a theme of modern architecture and landscaping.

“This will be a project with excellent architecture and a beautiful landscape of courtyards and paseos,” Fisher said. “The buildings are quite modern. This is a very exciting project in terms of its architecture and landscape.”

According to Levangie, while the new university housing is roughly a mile from campus, she does not believe commuting will be a problem for residents.

“As far as distance, residents will be a short 10 minute off-street bike ride from the middle of campus or a five minute bus ride to campus,” Levangie said.
Fisher said he hopes the new apartments will encourage students to remain within university housing systems.

“We believe this housing will provide students with a desirable alternative to apartments in Isla Vista,” Fisher said. “We hope that more students will choose to stay in on-campus housing during all of their years on our campus.”

“With capacity for 1,000 residents, the San Joaquin apartments will certainly aid with current overcrowding of residence halls,” Davidson said. “I think the installment of these new resident apartments will have a positive impact on the students at UCSB, provided Housing and Residential Services continue their efforts in energy-saving and environmentally efficient machinery, lights and facilities.”

A version of this story appeared on page 4 of Thursday, November 20, 2014’s print edition of the Daily Nexus.

A group of West Campus Family Housing (WCFH) residents recently sent Housing & Residential Services an email regarding the urgent need to address the related issues of the scheduled excavation of the WCFH main lawn and the scheduled increases in WCFH rental rates in July 2016 (see https://drive.google.com/file/d/0B70L2LCqruivdFA2MXY4Z1hIc2M/view?usp=sharing). We are proposing that Housing keeps WCFH rental rates as they are now in light of the significant square footage/amenity loss residents will experience once the lawn excavation and parking lot construction is fully underway in the coming months. Raising WCFH rental rates while simultaneously eliminating 11% of the complex – and… Read more »