The Daily Nexus
On the Menu
Not Your Normal Thanksgiving
November 20, 2014 at 9:00 am by Allison Wright 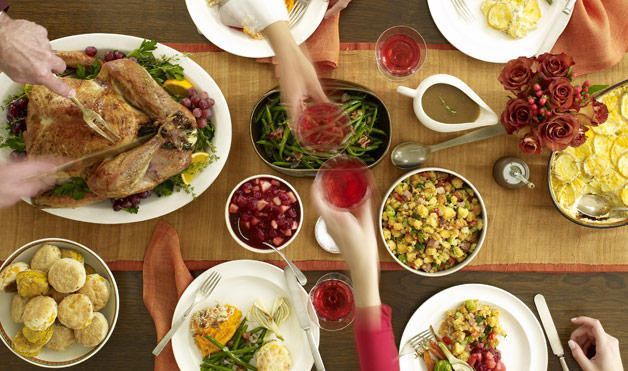 Back in the day, I was about as picky as they come. Buttered noodles, crescent rolls and chicken nuggets were my jam. Did I say jam? I take that back. I spat out anything that wasn’t concord grape. You may be asking, “how did anyone like that become the editor for a food column?” An excellent question! It started with innumerable nights of not being allowed to leave the table until I finished my vegetables. Though the fourth Thursday in November ranks in the top five of my favorite days of the year, Thanksgiving used to be one of those nights.

It’s a shame, really. My mom pulled out aprons, placemats, the nice napkins. And while the rest of my family chowed down, I poked at a single sliver of turkey and pulled a crescent roll from the basket every time it passed. I filled up on Martinelli’s sparkling apple juice and snuck bites of stuffing to the dog. I always lied on Thanksgiving. I was most thankful for the first mention of pumpkin pie that freed me from the yam and green beans shackles.

Now that I have the same eagerness as the pooch to consume anything put before me, I count down the days to feast holidays: seven until the next time I pile my plate high. That means seven days until a family reunion, too. With five culinary experimenters in one kitchen, things are bound to get messy. In years past, cinnamon meringue sweet potatoes, mac ‘n’ cheese bacon stuffing and even a chai tea infused pumpkin pie have graced our table.

But mine is only a single story. No two tables have the same grooves, burn marks or idiosyncratic leg lengths. No two will host the same meal. Even if many follow the turkey, stuffing and pie equation, tradition and personal touches will ultimately dictate their final incarnation of Thanksgiving dinner.

In this On The Menu special, three writers explore their relationship with the American pastime. We’ve all heard the myth of pilgrims and American Indians. But what other unifications take place across the nation in today’s day and age? From eliminating meat to upping the culinary ante, the following stories reveal an alternate image of the holiday we know so well.

In Cross-Cultural Thanksgiving Recipes, Lisa Maillard transforms classic Thanksgiving side dishes and ingredients. From Greek style stuffing to flan infused apple pie, these recipes are drool-worthy and bring just the right amount of “out of this world” to the turkey day feast. Even plain old green beans get an upgrade with the addition of bacon, cranberries and goat cheese.

Asian Alternatives tells story that many Americans can relate to. According to the U.S. Census Bureau, in 2009, 11 percent of the national population were second generation immigrants. That translates to approximately 33 million children with at least one foreign born parent. The heart of the “melting pot” tradition lays in these homes. So what happens when the all-American holiday meets New Americans? Kelsey Tang gives OTM just one example of the infinite possibilities of cultural fusion.

And finally, Marisa Ratchford’s Finding a Meat-Free Medium reveals one of the benefits of a gluttonous get-together. Rather than receiving ridicule for her choice to eliminate meat from her diet, her family pulled out all the stops to ensure that she “would lapse into a food coma acceptable by holiday standards” just like everyone else. And with her family’s recipes for Twice-Baked, Pecan Coated Sweet Potatoes and Mushroom Gravy, I’m questioning whether or not I really need turkey on my plate this year.

This story originally appeared on page 13 of November 20, 2014’s print edition of the Daily Nexus.