The Daily Nexus
Opinion
David, Goliath, and the Gaucho Volleyball Game
November 20, 2014 at 9:00 am by Derek Dimpfl 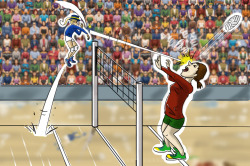 On the night of Friday, Nov. 7, an extraordinary event happened at the UCSB Women’s Volleyball match against Cal State Fullerton. Unauthorized feet trod on the sacred laminated wood of the Thunderdome’s hallowed play surface. Those feet were my feet, and this is my story.

I am an enthusiastic supporter of Gaucho Athletics, particularly the volleyball program. Last Friday, November the seventh, I was a little discouraged and dismayed at how few Gaucho supporters were in the bleachers opposite the team benches during the match. In an attempt to bolster our cheering audience on the “referee side” of the stadium, during the first time-out of the first quarter — when the score was approximately 9-11, Fullerton Titans leading — I made my way to the bottom of the bleachers at the ref-side and jogged across the court to address the massed Gaucho supporters on the bench-side. After a prolonged and high-volume exhortation to the amused fans to join the ref-side “True Blue Gauchos,” I made my way back. Aware that there was a small stir, the presiding game official gave me a dirty look, and while I was bolstering the crowd’s involvement in the game, an event staffer attempted to interrupt and talk to me, but I would have none of that. Whatever he had to say to me could wait after I awoke the blood of three hundred Spartans in our bench-side fans.

After sitting back down, the event staffer made his way to me and explained that I had made a mistake in running on the court. Ah! That was something I had not thought of. My black-rubber-soled shoes had gotten on the playing surface. We couldn’t have that. My mistake. As play went forward, several groups of people made their way to the ref-side bleachers. This was a relief, since I was afraid that no one would follow me back across the stadium. It was the mark of legitimacy. Success! To further encourage the bench-side fans, I addressed them again during another timeout later in the first game, this time aware that there was 1,800 square feet of laminated wood that my shoes could not touch. Running around the playing surface, I passed the empty Cal State bench and stood again in front of the court-side press-box. This time my rousing speech was cut short by a gray-haired man, red-faced with outrage, who pulled me aside to the corner of the court.

Needless to say, I was confused. The man — we’ll call him Bob — explained to me that because of an incident which occurred last year at a basketball game in which a student came onto the court during a game and had a confrontation with the opposing coach, there was a precedent which I was on the wrong side of in the Big West Conference, and the Fullerton Titans coach complained about me. He told me to go back to my former seat and watch the rest of the game in peace without anything too out-of-the-ordinary. I thanked him for explaining the particular nature of the situation to me and I walked back to my customary spot in the stands.

After I sat back down, there was a deathly silence in the Thunderdome. The timeout had passed, but the teams were still in huddles. Whispers floated through the rafters as the game officials spoke to the UCSB Athletics representatives. Bob broke away from the talk on the court and walked up to me, Row EE, Seat 4.
“Come with me,” he said.

As we walked down the stands, I asked if there was a new problem. We began talking in front of the bleachers, but he asked me to move to the secondary lobby, opposite to the main lobby. He began to explain to me that it had been requested that I be ejected from the stadium, and said that the Fullerton coach would refuse to play so long as I was in the Thunderdome. This puzzled me since it didn’t seem like a very good reason for me to leave. Just because Fullerton doesn’t have fans who are as passionate as I am is no reason to prevent the fiery Gaucho blood from running its course. If the Titans’ coach — we’ll call her Goliath — wanted to show the world how bad a sport she really is and how childish her disposition is towards fan behavior, she is at her liberty to do that.

As I talked with Bob, it became clear that if I left then, there would be no further consequences, but the consequences presented to me opon re-entering the stadium were very ill-defined and I was willing to take my chance of it for two reasons: One, if the game continued, I would get the pleasure of watching it played out, and two, I wanted to stand up for myself. I did not feel that my ejection was justified and I felt able of defending my position if it came to that.

The first time I was applied to by the event staff, I was asked not to put my shoes on the court. I cannot remember whether the staffer mentioned it being the volleyball court in particular, or if he just said “the court” generally. It would be absurd to consider the court to be the whole wood surface in the Thunderdome, since that would mean that fans couldn’t enter or exit the building without violating the rules. During the course of our conversation, Bob reminded me of the old maxim that “ignorance of the law excuses no one,” and I couldn’t help but feel how absurd it was to think that every fan, before entering a game, would read the Big West Conference bylaws.

Of course if we want to go all ancient Rome on our game attendees, we can, but given the sheer tonnage of laws and rules enacted on society, anyone would be hard-pressed to know exactly what he or she is and isn’t allowed to do while eating a sandwich in a public park. Ultimately, I was ejected from the game. This opinion piece was originally intended to be a humorous story about an unjust event that occurred on our campus, but since beginning writing it two days after the event, I’ve found a much more pressing and important thesis to focus on instead.

Ladies and gentlemen of the reading audience, we live in an over-legislated security state and this incident at the very lowest level which happened to me is only symptomatic of a wider systemic issue. Any political order that crafts laws as a reaction to every specific occurrence which comes into the public view is one in need of serious correction. We live in a society which uses the 2001 terrorist attacks as an excuse to spy on its own citizens. We live in a society which sees fit to pass congressional bills of length in excess of three thousand pages. I guarantee you that no single member of Congress read the entire Affordable Care Act, and there could not possibly have been more than a handful of reps who read more than a third of it; I feel even that estimation is generous.

Anyone who has studied American civics ought to know that our society supposedly operates under Blackstone’s Formulation: “Better that ten guilty persons escape than that one innocent suffer.” Instead we are adopting the principle that it is better for ten innocent to suffer than for one guilty person go free.

Anyone familiar with American political history knows that the last war that the U.S. Congress initiated was World War II. Since then, every war America has embarked on has been a purely executive venture, enabled by the legislature’s power of the purse through political co-opting and deal-making. This concentration of executive authority has encroached, sometimes rapidly, sometimes slowly, on your rights. Your rights.

Anyone who is familiar with statistical analysis is familiar with the concepts of type one errors and type two errors and their corresponding parameters alpha and beta. In order to perform accurate and responsible analysis, a statistician must reduce the value of alpha — that is, reduce the chance of erroneously accepting something which is not regarded as the status quo. In the American legal system, we hold persons to be innocent before proven guilty. That is the status quo. In our efforts to minimize mistakes under Blackstone’s Formulation, we wish to minimize the number of people convicted falsely. Rather than attempting to protect innocence, for the last seventy years or so, our social order has been regarding it more of an evil that a guilty person should go free than an innocent individual be incarcerated.

What do we say of these people, these “anyones” who are familiar with American civics, political history and statistical analysis? Do we have a high regard for their distaste of the current state of affairs, or do we, like sheep, continue to be led in fear by people who profit from the extraction of liberties from individuals? How big an industry, do you suppose, is funded by airport security? How much money do you think the manufacturers of imaging equipment receive from their government contracts? How often do you need to be seen naked by a TSA official for you to say enough is enough? (The domain of airport security is mildly greyer in this respect, in that it is an international issue, and airplanes are convenient targets for terror.)

What does it say about a society which incarcerates its citizens on the grounds of the most specious and suspect evidence? Almost exactly a year ago, a man was held in custody for about twelve hours overnight in a New Mexico hospital, during which time he was forced to undergo enemas and a colonoscopy (one of the most painful non-surgical procedures known to modern medicine) on the suspicion of carrying drugs because he was clenching his buttcheeks strangely while waiting in a line. Of course, this story stands out because it is exactly that, a standout, but it is indicative of and an extreme example of the many petty encroachments that we live with on a daily basis in America: Land of the Suspected, Home of the Paranoid.

How paranoid do we have to be become? How far are we to take this grievous encroachment on basic rights? If a government, which we must remember is composed of fallible and changeable human beings, were to take on itself the duty of imprisoning anyone in danger of doing wrong, the whole society, including those in charge of government, would live permanently in the penitentiary.

Derek Dimpfl is in his second year as a UCSB transfer student and is currently preparing his second bid for UC Student Regent. He majors in mathematics and economics with a minor in Statistics.