The Daily Nexus
News
New Meningitis B Vaccine To Be Available at UCSB Soon
November 19, 2014 at 12:29 am by Megan Mineiro 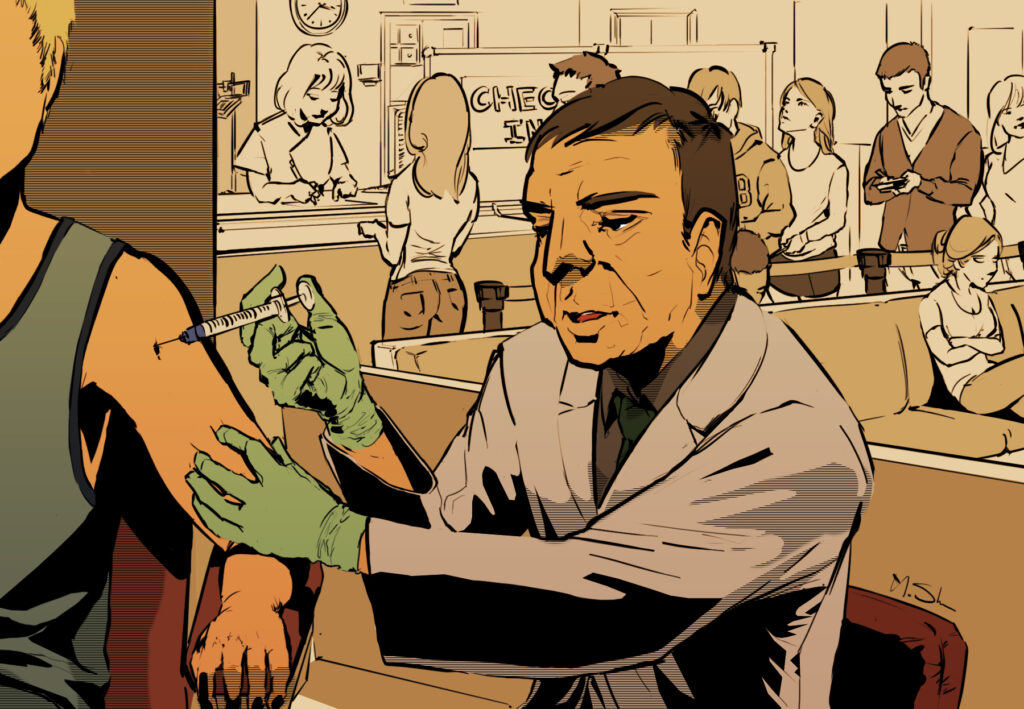 A new vaccine to protect against meningococcal serogroup B became available yesterday for order through healthcare providers in the United States after being approved in late October by the Food and Drug Administration (FDA).

Meningitis serogroup B infected four students last Fall, with one student losing both of his feet to the disease. The outbreak initiated a Centers for Disease Control and Prevention (CDC) investigation of the campus and the emergency approval of a meningitis B vaccine for special administration to UCSB students. The new vaccine, Trumenba, is intended to protect individuals ages 10 to 25 and will be administered in a three-dose series, and a pre-order of Trumenba has already been placed by Student Health and should be made available to students in as soon as one week.

According to Student Health Director Mary Ferris, students will have to pay for the vaccine because it will not be covered by any insurance carrier until after the CDC Advisory Committee on Immunization Practices (ACIP) reviews Trumenba in February to make a formal recommendation for how the vaccine should best be administered.

Ferris said various considerations should be taken by the ACIP about how the drug should be administered.

“Is it the whole country or just certain colleges or is a smaller group of high risk people?” Ferris said. “Until the Advisory Committee on Immunization Practices (ACIP) makes their recommendation there won’t be any insurance reimbursement for it. We decided that we should probably start with less than 500 vaccines. But we would be able to scale that up, to increase it very quickly as long as they have it available.”

According to Student Health Pharmacy Manager Diane Bell, it is within students’ “best interest” to get vaccinated, regardless of cost.

“I hope that we’ll have huge interest in our student population in getting vaccinated,” Bell said. “I would really hope that students would not let costs interfere with their health. For all issues of healthcare for which a student may have financial need we have resources within the division of Student Affairs to try to assist students with that.”

Bell said the Student Health Department is looking to get Trumenba covered by Gaucho Health Insurance, once it is approved by the CDC.

While Trumenba is not the vaccine that was made available to UCSB students last year (Novartis’ Bexsero), it has been approved by the FDA and serves the same function.

Bell also said it is important that students receive their flu shot because the symptoms for the seasonal flu and meningitis B can often be hard to differentiate.

“It’s high fever, rash, stiff neck, headache so in some ways it mimics the flu,” Bell said. “Those are all signs of the flu and those are all signs of meningitis so we want people to come in and get a flu shot and take that out of their list of things to have to be concerned about.”

According to Bell, any student who suspects they may have contracted meningitis B should go to the Student Health facility to be evaluated.

According to Pfizer’s Director of Media Relations for Vaccines Sally Beatty, in individuals ages 10 to 25, approximately 30 percent of meningococcal cases are serogroup B in the U.S. and 60 percent of adolescent survivors suffer from permanent life altering consequence such as loss of limbs, loss of hearing or neurological damage.

“It’s not a common occurrence, but when it happens, it’s devastating,” Beatty said. “So we are just grateful that we were able to bring this vaccine to the market as quickly as we were … We have been working around the clock since the approval to make it available to get supply into the U.S.”

According to Ferris, the release of Trumenba will make it easy to administer the vaccine in the case of another outbreak of meningitis B on campus.

“When we had our outbreak last year, no vaccines for serogroup B disease were approved in the United States, so that’s why we had to go through the elaborate application and permission process to get special approval to use it,” Ferris said. “So now we would be able to order it from the drug manufacturer and deliver it to students much more timely and quickly. We are so happy that it is available now.”

Ferris said that for the next few years, the goal will be to get current UCSB students caught up on immunizing against meningitis serogroup B.

“Eventually after you catch up all the current college students we will probably be emphasizing it before you enter college so that you are prepared,” Ferris said. “But there will be several years when we are just getting everyone immunized and protected before that can happen.”