The Daily Nexus
On the Menu
Balancing on a Buffet: Human Ecologist Presents Local Agrifood Research
November 19, 2014 at 4:00 pm by Allison Wright 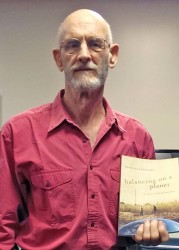 Professor of Environmental Studies David A. Cleveland with his recent book, Balancing on a Planet. Allison Wright/Daily Nexus

Environmental studies professor David A. Cleveland showcased his research on local food systems and their effects on diet and climate yesterday in the first talk of the Pacific Views: Library Speaker Series.

Simply dressed in dusty denim and a red cotton button-down, Cleveland began the Interdisciplinary Humanities Center sponsored lecture entitled “Balancing on a Planet: Can Local Food Improve Health, Increase Equity, and Slow Global Warming?” just after 4 p.m. to a packed crowd on the eighth floor of Davidson Library. The lecture focused on turning to local food systems in combination with necessary dietary restrictions on a national scale to reduce climate change.

Cleveland called for a change in the way consumers value food as well as their relationship to the environment and their food system.

“If there are limits, we have to limit our demand. I think imbuing that in the way people think about their food is a really important thing. The challenge is to get people to see climate change as something intimate to them and make them start rethinking their identities not so much as consumers but in socially proactive ways.”

According to Cleveland’s research, despite a decline in greenhouse gases (GHGEs) compared to economic strides over the past 10 years, total emissions in the United States have continued to increase. Cleveland argued against growing consumption and said reducing intake is vital to curbing continued climate change.

“The United States, California as a major example, has gotten really much more efficient at economic growth. The amount of greenhouse gas emissions we produce per unit of GDP has gone down,” Cleveland said. “The problem is that with that growth there’s still an 11 percent increase in total GHGEs … I conclude that in the age of the anthropocene, we need to decrease consumption to avoid climate catastrophe.”

Cleveland’s research hinged upon an initial investigation of the Santa Barbara County Agrifood system, where growers export the majority of local produce. 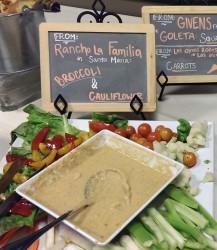 Local vegetables and other snacks were available after the talk. Allison Wright/Daily Nexus

But according to Cleveland, eliminating produce exports would have little impact on reducing GHGEs.

“Localizing produce consumption 100 percent would have a very minor effect on GHGEs because transportation is a small part of the total food system impact on the climate.”

Cleveland said that while keeping Santa Barbara produce within county lines may not be a complete solution, adopting healthier habits such as limiting red meat and increasing whole grains could effectively reduce consumption and environmental impact

“Localization may not be the solution if it contributes to increases in consumption. However diet change can be the key to local food as an alternative because diet change is a way to reduce consumption growth, to reduce emissions and also can provide measurable indicators for equitably reducing GHGEs and improving nutrition.”

To stress the impact of minor diet changes, Cleveland compared altered food consumption to the feasibility of the White House’s Climate Action Plan and the possibility of reducing GHGEs by increasing efficiency standards in new automobiles.

“So to meet [Obama’s] goals you would have to make a lot of new cars. What happens to the old cars? How do you make new cars? Energy,” Cleveland said. “Diet change doesn’t require making new cars. What it requires is also something pretty challenging: and that is making new thoughts.” 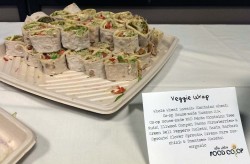 Following the talk, attendees sampled a selection of locally sourced hors d’oeuvres. Both the Isla Vista Food Cooperative and Salty Girl Seafood made donations to furnish the local array.

Salty Girl Seafood contributed 20 pounds of locally caught Ridgeback Shrimp. Served chilled, the deep red and white crustaceans were accompanied by Tomato Jam from Givens Farms in Goleta and a description of “the catch.” Fisherman Junior Gorgita trawl caught the Ridgebacks on Nov. 17. According to the Monterey Bay Aquarium’s Seafood Watch program, trawl and trap catches are considered a “good alternative” and surveys suggest that populations of Ridgebacks remain “relatively abundant.” 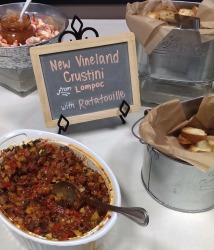 The local treats may have done little to reduce GHGEs, as Cleveland’s research suggests, but the predominantly vegetarian spread of appetizers adhered to his prescription for a reduction in red meat consumption. Clearly labeled by origin and obviously nutritious, the reception’s edible offerings reinforced the talk’s simplest take-away: