The Daily Nexus
Sports
UCSB Outlasted By Florida Gulf Coast in OT
November 18, 2014 at 5:05 am by Mark Salay 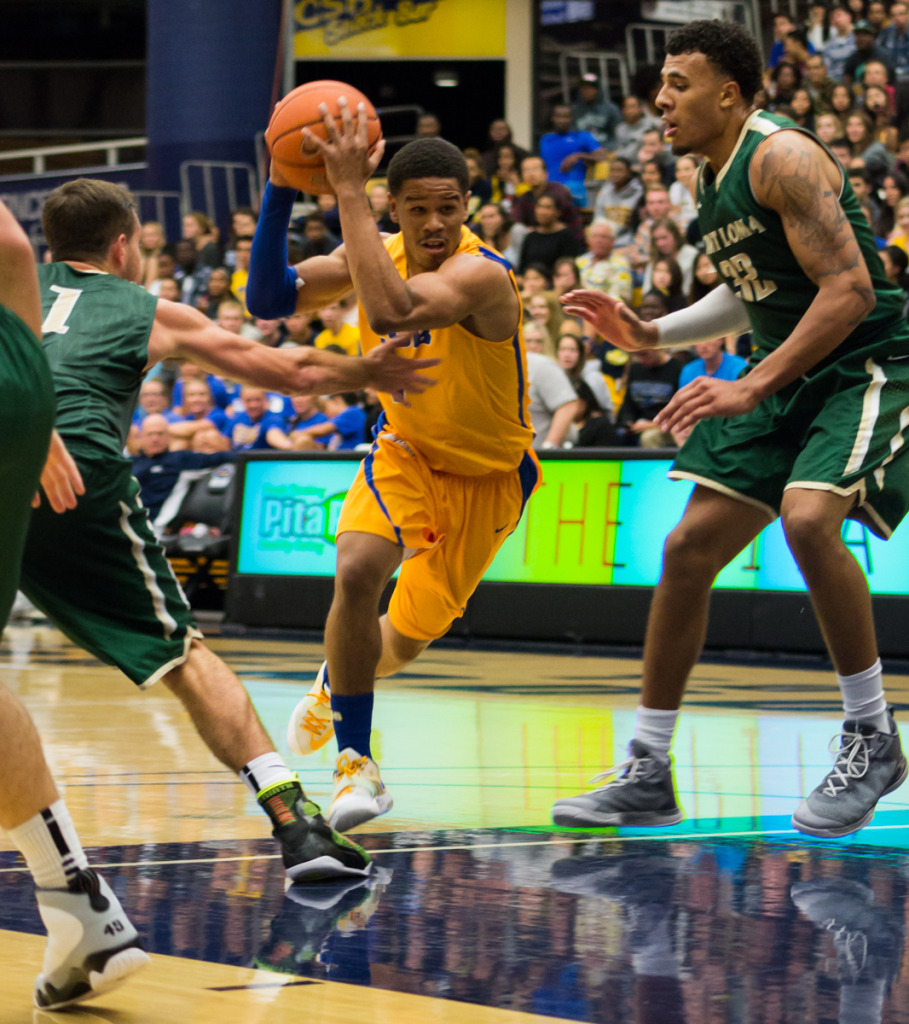 Eric Childress (above) and company were a few plays away from the team’s first win of the season. (Cameryn Brock/Daily Nexus)

In a battle between mid-majors, a resilient UCSB men’s basketball team was outlasted by Florida Gulf Coast University in an 81-75 overtime defeat last night at Alico Arena.

With the game left in the hands of its best player, Alan “Big Al” Williams calmly knocked down two free throws with 1.2 seconds left to send the game into overtime after UCSB trailed by as many as nine points in the half.

However, after outrebounding FGCU 39-30 during regulation, UCSB had a taste of its own medicine in OT, losing the rebound battle, which led to second chance points for the Eagles and the eventual win.

UCSB is now 0-2 to start the season after losing last week to No. 5 Kansas, while Florida Gulf-Coast improves to 2-0.

Williams had another dominant performance for the Gauchos. The current Big West Player of the Week finished with 29 points, 16 rebounds and four assists despite FGCU playing tough defense and using multiple defenders to guard him.

Junior guard John Green came off the bench and was the second-leading scorer on the night for Santa Barbara with 17 points. Green was effective on both sides of the court, making big buckets and drawing offensive fouls on defense before fouling out.

The game was tight for most of the second half with both sides sharing the lead. FGCU began the half looking to extend its 32-28 first half advantage and were effective coming out of the half. Yet, the Gauchos went on a 7-0 run to close the gap after junior guard Michael Bryson knocked down a corner three-pointer on a skip pass from Williams.

From there on, the Gauchos clamped down defensively and closed down driving lanes to set up the close finish before going into overtime with the score tied at 64.

It was in overtime where the Eagles began taking control of the game. FGCU took advantage of fouls committed by UCSB and converted from the charity stripe to gain separation. With 27 seconds left to play, the Eagles were winning 77-74 after a made free throw by sophomore guard Eric Childress. Despite the attempted comeback, the rally fell short as FGCU made its free throw attempts and controlled the boards in the period.

Williams was limited to only one basket in OT as the big man played with more caution after picking up his fourth foul. Foul trouble, as in the previous game, plagued the Gauchos. Bryson and freshman guard Gabe Vincent were forced to sit parts of the game after getting into early foul trouble.

Another area concern for the Gauchos was in the three-point shooting category. Santa Barbara shot only 22 percent from behind the arc, going a total of 5-23 on the night.

Meanwhile, senior guard Brett Comer was just as dynamic as Williams on the offensive end, finishing with 28 points to lead the Eagles.

After two games on the road to start the season, UCSB returns home for its first regular season matchup at the Thunderdome. The team will face The Master’s College on Saturday as it looks to get back into the win column.