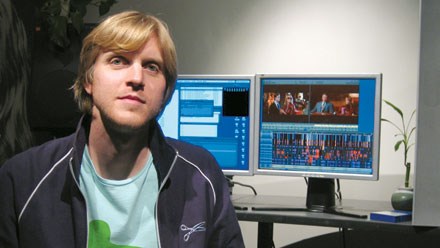 Behind every great TV show stands a great producer. Behind the producer stands a great director, and behind the director sits the editor. “House of Cards” editor Byron Smith sat down with us last Thursday, Nov. 13 at the cozy Pollock Theater for a viewing of his Emmy-award nominated episode and a Q&A session.

Smith graduated from the American Film Institute and has since worked with actors like Demi Moore, Brad Pitt and Ryan Murphy. Smith has edited 13 episodes of “Nip/Tuck”, cut an episode of “The Bachelor”, and was nominated for an Emmy for Outstanding Single-Camera Picture Editing for “House of Cards”.

Clad in jeans and flawlessly executing the Justin Bieber hair flip, the editor generally underwhelms audiences with his humble disposition. When asked about editing the stunning scene in which “House of Cards”protagonist Frank Underwood commits murder and the camera focuses on his initials “F U,” Smith modestly responded, “All I did was the credits.”

Underneath this low-key persona lies a fantastic editor. Just like how power-hungry politician Underwood calls the shots in Congress, Smith literally calls the shots in the show. He transforms raw footage into shot sequences that become episodes. Smith’s road to power may not have been “paved with hypocrisy and casualties” like Underwood’s, but he wields his power effectively.

“This is the show in which I’ve taken the most pride in my career. I feel like we’re reinventing episodic. We don’t call it television anymore. We’re in a whole new world in terms of how people are absorbing entertainment,” Smith said. He explained that “episodic” refers more to storytelling, which can happen anywhere.

Just as the platforms for digital entertainment change, so do the filming methods.

“The lines between features and television are blurred now. Another thing is ‘cross boarding’ — shooting two episodes at a time. I’m usually paired with the director so I’m cutting two episodes simultaneously,” Smith said. “They shoot for 20 days now — 10 days per episode. Instead of cutting 50 pages or so, I’m cutting 120 pages of script in 20 days. Then I have a couple days to add in music and play around with sound.”

Smith brought the audience into his innovative editing hub, showing the filmmaking systems he uses on his laptop. Right above his “Call of Duty: Legacy” folder was his “House of Cards” folder. He hailed PIX as the best system for scene-editing, citing only one problem: “I wish programs would work as fast as my brain thinks — in my head [the scenes] are already done.”

Smith walked the audience through the making of the second season’s chilling first episode from an editor’s point of view. He demonstrated how to highlight a shot or scene and communicate with the directors and producers about edits. It seemed similar to using Google Docs or “track changes” on Word.

One of the television phenomena that defines “House of Cards” is the on-screen text messages; Underwood’s words appear much more vicious in 30 succinct characters. Smith detailed how he suggested that a scene in the script become an on-screen text instead, and the directors and producers responded enthusiastically. “This is a powerful example of how collaboration can be. This is how I go to work every day.”

Smith inspires people to look beyond the typical director-producer leadership duo of television. “Power is a lot like real estate. It’s all about location, location, location. The closer you are to the source, the higher your property value,” Underwood said while standing next to the President. Smith may not be the producer or director, but he walks beside them in television grandeur, calling the shots.