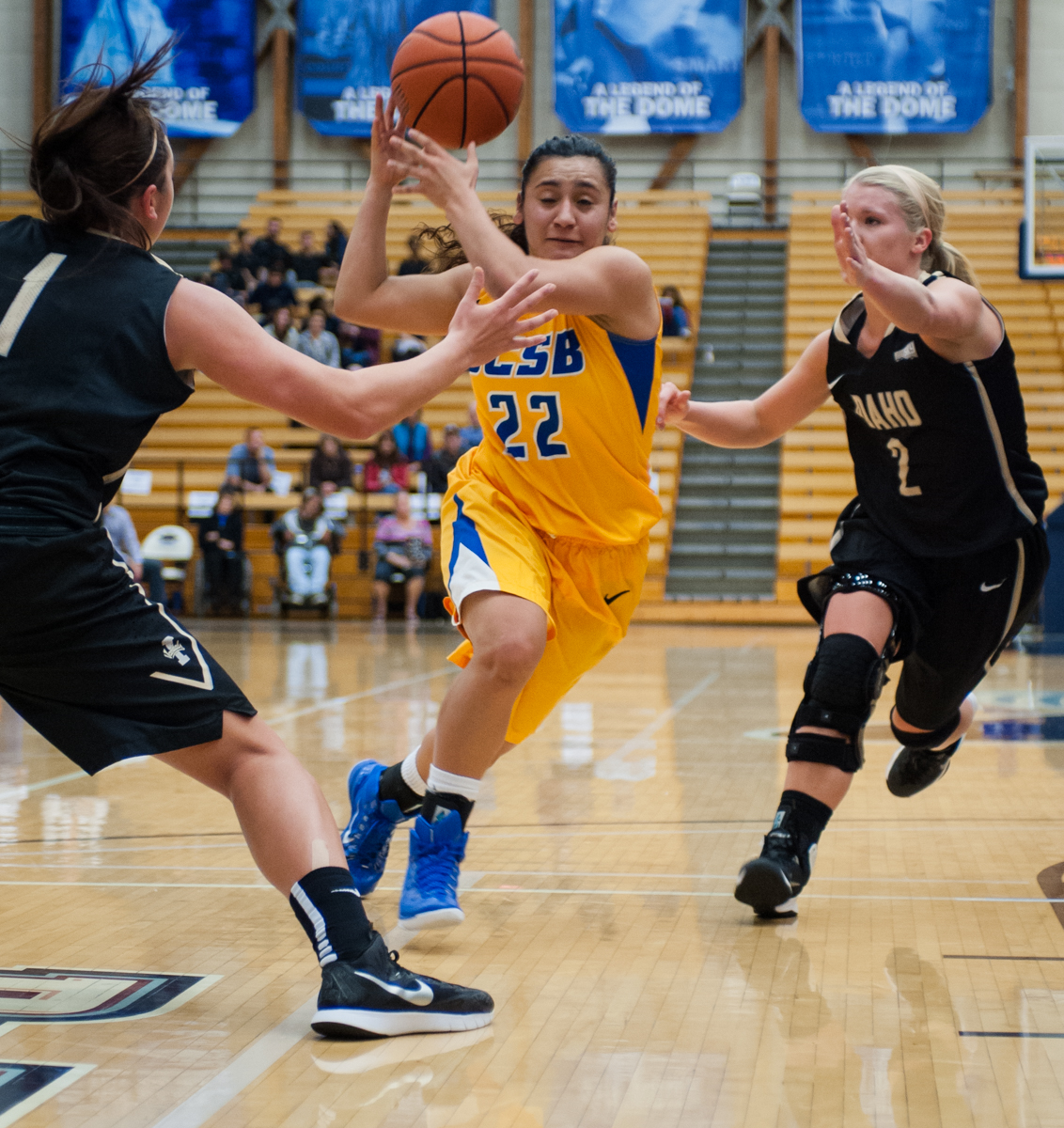 Despite going on a dominant 24-3 run midway through the game, the UCSB women’s basketball team fell to Idaho in its regular season home opener in a heartbreaking 47-44 loss.

With their seventh straight loss dating back to last season, the Gauchos now find themselves at 0-2 to start the year. The Vandals were able to bounce back from a loss to Cal State Northridge in their season opener, improving to 1-1.

“It’s just the second game of the season. Obviously it would be nice if [our jumpers] were falling, but we have lot of work to do,” senior center Clair Watkins said. “I think we’ve come a long way since preseason, so we’re still working to get in our stride. We haven’t peaked yet, not even close.”

For the second consecutive game to open the year, Santa Barbara found itself in an early hole down 14-2 less than 12 minutes into the game. A flustered Gaucho offense was continuously denied as it tried to feed the ball to Watkins inside, instead settling for jumpers as they started the game a miserable 1-17 from the field.

“We got off to a cold start. It’s hard to dig yourself into a hole,” Head Coach Carlene Mitchell said. “We started pressing and picked up the tempo, but you have to knock down jumpers. We tell our kids that’s how you make your living and its the only way that Clair’s ever going to get open looks.”

After switching to a full-court press, the Gauchos were able to steal the early-game momentum, going on a 13-0 run. The run was sparked mainly by junior guard Jasmine Ware, whose jumper with 2:42 left in the first half gave UCSB its first lead of the game at 15-14.

“Energy is everything, and I think Jas started it off by getting fouled and knocking down a couple free throws. She brought a lot of energy,” Watkins said. “We just feed off of each other as a team, and once energy gets going, shots fall.”

The Gauchos’ momentum carried into the second half, resulting in a 26-17 lead after a free throw by Watkins with 15:18 remaining.

From that point on, the story of the night became Idaho’s three-point shooting, headed by junior guard Christina Salvatore. Salvatore made 5-10 three-pointers, four of which came in the second half, on her way to a 15 point, nine rebound night. As a team, the Vandals hit 9-25 from downtown, compared to just 1-14 for UCSB.

“I’ll give them all the credit,” Mitchell said about the Vandals’ outside shooting. “They made tough shots.”

After battling back for most of the second half, Idaho finally took control of the lead after back-to-back triples from Salvatore and senior guard Stacey Barr made it 45-42 with 2:56 left.

A Watkins jumper and a pair of free throws by Barr made it 47-44 with 25 seconds remaining, forcing the Gauchos to look for a three to tie the game. Sophomore point guard Onome Jemerigbe was able to find Ware for a potential game-tying three from the corner at the buzzer, but the shot fell just short, giving the Vandals their first win of the season.

Ware led the way for her team on the night with 14 points on 5-12 shooting. Watkins recorded her first double double of the season with 11 points and 11 rebounds and senior guard Kristine Brance also chipped in with 11 points.

The Vandals leading scorer for the second straight game was Barr, who had 20 points along with six rebounds on a 6-16 shooting night. The senior is averaging 19 points per game after two outings.

“[Barr]’s a tough player,” Mitchell said. “She can score in a variety of ways and she has a high basketball IQ. She took us off the dribble a couple times and she knocked down open jumpers.”

Despite starting the night just 1-17 from the field, the Gauchos ended the game at a much more respectable 30% clip on 15-50 shooting, compared to 34% on 16-47 shooting by the Vandals.

Last night’s game was played in honor of Renée Trenholm, a long time supporter and friend of the UCSB women’s basketball program who passed away this May.

UCSB will be at home again this Thursday to take on Santa Clara as it continues to search for its first win.