The Daily Nexus
Opinion
A Little Liquid Courage
November 18, 2014 at 9:00 am by Katherine Anderson 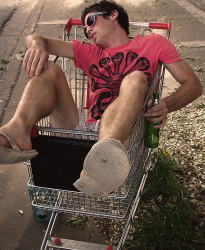 As we Gauchos know, the most common reaction you get when someone finds out you go to UCSB is something along the lines of, “Wow that’s such a party school!” or “be careful.” There is a definite stereotype associated with the type of person that attends this school. Most people I have come across assume that you are either a beach bum or an alcoholic (or both). While many times this can be a 100 percent accurate description, there are so many people that go here that are not like that at all who are often misrepresented.

Students here are often filed into broad categories of partiers and non-partiers. In my experience, the ones who are classified as “partiers” are seen as the ones who know how to have a good time, while the people who don’t drink are portrayed as quieter and against the whole DP party scene. It is often assumed that the “non-drinkers” do not want to participate in the typical social events you find in I.V. on the weekends. However, this is not always the case, and there are a few rare people that exist that believe that a social life does not have to coincide with drinking.

Freshman year, I had two very different and very unusual roommates who shared something pretty big in common: neither drank. They made their choices for similar reasons but acted socially in an extremely different manner. One stayed in a lot of the time and did not partake in the “I.V. scene,” fulfilling the typical stereotype of someone who refrains from drinking, while the other one loved going out and partying. The only difference between her and the rest of Isla Vista was that she chose to interact with people sober. (I know, shocking right?) Most people assume that if you don’t drink, you automatically are not social and do not like attending parties. While this is often true, there are many people who love to be social without being under the influence, they are just harder to find. This is a rare thing because the social scene in Isla Vista is closely associated with drinking.

The fact is that drinking is such an ingrained part of our social lives that it is almost shocking when someone chooses to abstain from it. It is as if we don’t know what to do with people who don’t coincide with our accepted social norms. My roommate would recount stories of parties she went to where guys would come up to her and offer her a shot as a way of starting a conversation. When she informed them that she didn’t drink, she told me that they seemed at a loss for words and often left because they didn’t know what to say.

A lot of people use drinking as a social crutch. Think about it, you are much more comfortable approaching someone you find attractive after a couple of shots, am I right? (They also somehow get more attractive the drunker you get). It is natural to use alcohol as a buffer to make you more confident, friendly or a much better dancer. I know that I am far more confident with my dance moves after a couple of drinks. But, when you strip that away, people often don’t know what to do. It is extremely commendable when someone is brave enough to approach nightlife completely sober. In that state, you have nothing to hide behind. Going 100 percent dry is not for most of us, but I raise my glass to those who can do it.

I used to think that going out sober would be a horrible experience and that I wouldn’t be able to stand all of the drunk people around me. However, I was pleasantly surprised when I tried it last year. It was, at first, weird to be getting ready to go out without worrying about what you were going to be drinking and what state of drunkenness you were in. You don’t realize how much of your night revolves around the consumption of alcohol until it is taken away. However it didn’t take long to get comfortable with it. I found that it is all about your mindset and deciding that you are going to have an awesome night no matter what. My roommate and I spent the entire evening dancing and running around and having a great time. If I remember correctly, half the people we went out with thought I was hammered because I was having so much fun — oops!

While I am definitely not about to give up drinking, I now like to make a conscious effort to plan activities with friends that do not revolve around alcohol. Often those sober nights can be the most memorable because you have to be much more creative to have fun. (Not to mention, your memory is far better.) I always say that you know when someone is a true friend when you can hang out with them and have an amazing time both drunk and sober. While I am in no way saying that drinking is a bad thing or that it is something that people should avoid, I think that it is important to be comfortable with yourself sober as well. Give it a try for a night, you might surprise yourself with how much fun you have.

Katherine Anderson can drop it like it’s hot, even when she’s stone-cold sober.

Great article! I just turned 28 and for me the party never stopped after college. I went to a big party school as well. I decided I wanted to give up drinking for a year to see what changes I could make in my life. It has been 2.5 months so far and it wasn’t as hard as I would have imagined. Check out my blog http://www.thesoberexperience.com to see Throw Back Thirstys and more.