The Daily Nexus
Sports
Williams’ Big Night Not Enough to Upset Kansas
November 17, 2014 at 5:05 am by Mark Salay 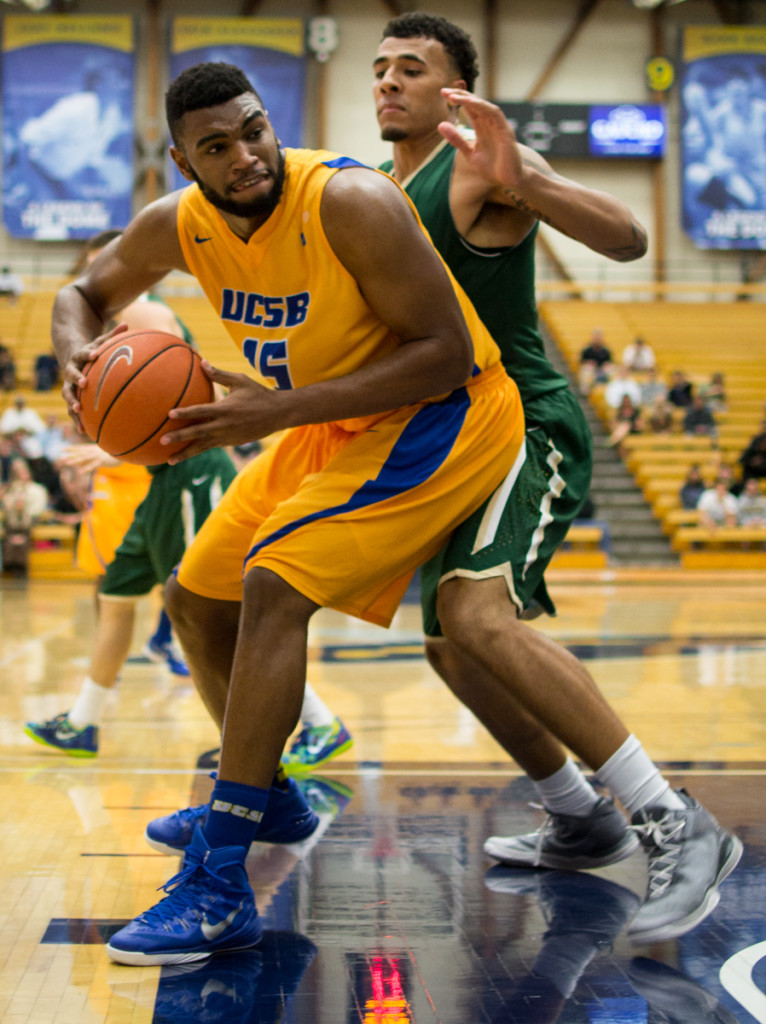 Big Al showed he can play with anyone on Friday. The big man led the way with 22 points and 13 rebounds. (Cameryn Brock/Daily Nexus)

Despite a game-high 22 points and 13 rebounds from senior center Alan Williams, the UCSB men’s basketball team was unable to upset No. 5 Kansas on the road, losing 69-59 on Friday night.

The loss places the Gauchos at 0-1 on the season while the Jayhawks move to 1-0. Although Kansas was in control of the game by the late second half, UCSB kept pace and trailed by just two points as late as 14 minutes left in the game. However, foul trouble and low shooting percentage proved too much to overcome for the Gauchos.

Williams showed he could play against the elite programs of the nation, putting up big numbers even though he was heavily guarded the entire night. Big Al did not get much help from his teammates as the team shot only 21 percent from three-point range and were heavily outrebounded, losing the battle 42-31.

Meanwhile, Kansas benefitted from a total team performance. Four players scored in double-digits for the Jayhawks with junior forward Perry Ellis scoring 13 and totaling 10 rebounds for the seventh double-double of his career.

The game changer for Kansas came off the bench in the form of freshman guard Devonte’ Graham. Graham led the team with 14 points and spearheaded a first half 11-2 run that erased UCSB’s 15-14 lead; Graham scored eight of those points and assisted on the other bucket before the half ended with Kansas up 31-23.

Before that run, UCSB had done a solid job on defense but its 27 percent shooting from the field in the half prevented the team from threatening Kansas even more.

Nonetheless, Santa Barbara came to play to start the second half. Trailing by 12 three minutes into the half, the Gauchos scored 10 unanswered points with consecutive treys by freshman guard Gabe Vincent and senior guard Zalmico Harmon cutting KU’s lead to 39-37.

That was as close as UCSB got to taking back the lead, however, as foul trouble began to creep up for the Gauchos. Kansas scored 13 points from the charity stripe after the run and went to the line for 20 attempts in the half, shooting 80 percent. In total, the Jayhawks converted 23-32 free throws while UCSB went 9-14.

Another bright spot for the Gauchos besides Big Al was junior guard John Green. Green entered early in the game after junior forward Mitch Brewe was forced to leave after picking up two early fouls. In 16 minutes of play, Green, who has been limited to four games in three years, had nine points on four-of-seven shots from the field.

UCSB plays again today on the road against Florida-Gulf Coast University. FGCU plays in the Atlantic Sun conference and enters 1-0 on the season. Last year the team went 22-13 overall and was selected to the National Invitational Tournament. Two years ago, the program went to the Sweet 16 of the NCAA Tournament.

Tip-off is scheduled for 4 p.m. and can be seen on ESPN3.