Over the weekend, I had a fruitful opportunity to sit down and talk with a few of the talented musicians from eclectic jam band Brothers Gow, who will be playing SOhO this upcoming Wednesday. I got to know more about their personalities and gain a sense of their creative visions. Alex Gow Bastine (keyboard and vocals), Kyle Merrill (guitar, trumpet and vocals) and Ethan Wade (guitar and vocals) sparkle with a genuine enthusiasm — enthusiasm that is necessary to create soul-grooving music.

Although none of the brothers of Brothers Gow are actually related, they have a rich history that solidifies their relationships and gives credence to their name. Bastine and Merrill’s musical careers go all the way back to elementary school in Arizona.

“Me and Alex have been friends since first grade and we’ve basically been playing music together since third grade,” Merrill said. “I initially learned bass so I could jam with Alex, but then I learned the wonder of guitar solos and I never looked back. Now I’m one of the lead guitar players.” Wade was next to join the band, after being introduced to the young musicians in eighth grade.

Nowadays, the band is based out of San Diego with five solid members. The trio was very grateful for the other members and technicians who could not attend our interview, but they were especially proud of their new drummer, Nathan Walsh-Haines. “That’s the one nice thing, with the addition of Nathan — he just fits in so well. It’s been nothing but awesome with him,” said Bastine.

Brothers Gow recently released their fourth studio album, Reflections, and have been touring the southwest to play new songs, which have been received ecstatically. Reflections took longer to record than previous albums, but now that is it finally here, the band says it’s one of their finest pieces.

“Overall there’s a pretty positive vibe on the album and the way that it’s arranged. I think people are going to be stoked on it,” Bastine said. “I think musically it’s some of the best work that we’ve ever recorded.”

But Brothers Gow wouldn’t be a legitimate jam band if they didn’t have a killer light show to top off their killer set. “It’s a huge part of our show, and [Matt Collier, lighting director] knows all of our signals and knows when we’re going to improvise … it makes for a good show,” said Merrill. 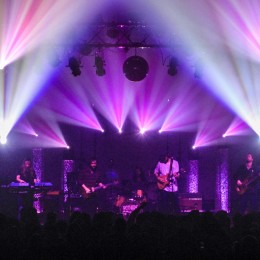 The band is also composed of wonderful philanthropists who have made sure to give back to the community that supported them. Their non-profit side project, Brothers Gow Foundation, has donated 18 instruments to a school in San Diego’s Ocean Beach. “Nowadays there aren’t really music programs in schools. They are the first things to get cut … so far we’ve been able to put an instrument into every classroom at OB elementary,” said Bastine. The band is a living, working example of how hard work and positive action leads to progression and success.

In regards to their upcoming show at SOhO, the trio was full of excitement. “SOhO has a great stage and a nice sound guy,” said Bastine. “Everybody is going to have a good night,” everyone said in unrehearsed harmony.