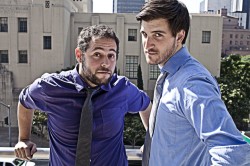 Visiting the town was indie electronic-rock duo Better Looking People with Superior Ideas. Hailing from Los Angeles, Craig Vermeyen and Nick Norton have steadily toured Southern California to showcase their blend of electronic and rock. The band recently employed the help of producer Nick Tipp, a man responsible for the production of notable artists like Passion Pit and The Decemberists. Tipp’s production technique explains the celestial and fuzzy tunes of BLPWSI.

While audience members unwound on the couches, the musical pair settled within a large dome strung with lights, resembling a burning comet reflecting astral melodies. The duo was friendly enough to invite guests to climb and even dance in the dome in an attempt to create an intimate atmosphere.

After a moment of technical adjustments and mic testing, BLPWSI finally opened up with “Keep Calm.” I sank into the worn-out couch and munched on a chocolate bar as this uncanny feeling of teenage angst pounded my ears. Their music echoed the trivial blues of high school years, and I reveled in those brief four minutes where my only concerns involved the woes of puppy love. They continued the show for another three songs and concluded with the slow track, “With You.”

In addition to the wistful tracks, what made the L.A.-based duo worth listening to were their instrumental skills. Although Vermeyen primarily handled the responsibilities of the drum set and lead vocals, Norton also occasionally pulled out his own set of drumsticks to accompany his partner, his guitar strapped to his back. The multi-instrumentalists proved themselves deserving of recognition through their ability to manage multiple instruments simultaneously.

Lit by Christmas lights and convenience stores, First Fridays became a night to remember with a fresh soundtrack provided by BLPWSI. Rustic visuals and the aroma of corn tortillas completed the cozy setting. I’m sure Isla Vista would gladly welcome back Better Looking People with Superior Ideas.