The Daily Nexus
Sports
Big Al Leads UCSB Into Season Opener Against No. 5 Kansas
November 13, 2014 at 5:05 am by Mark Salay 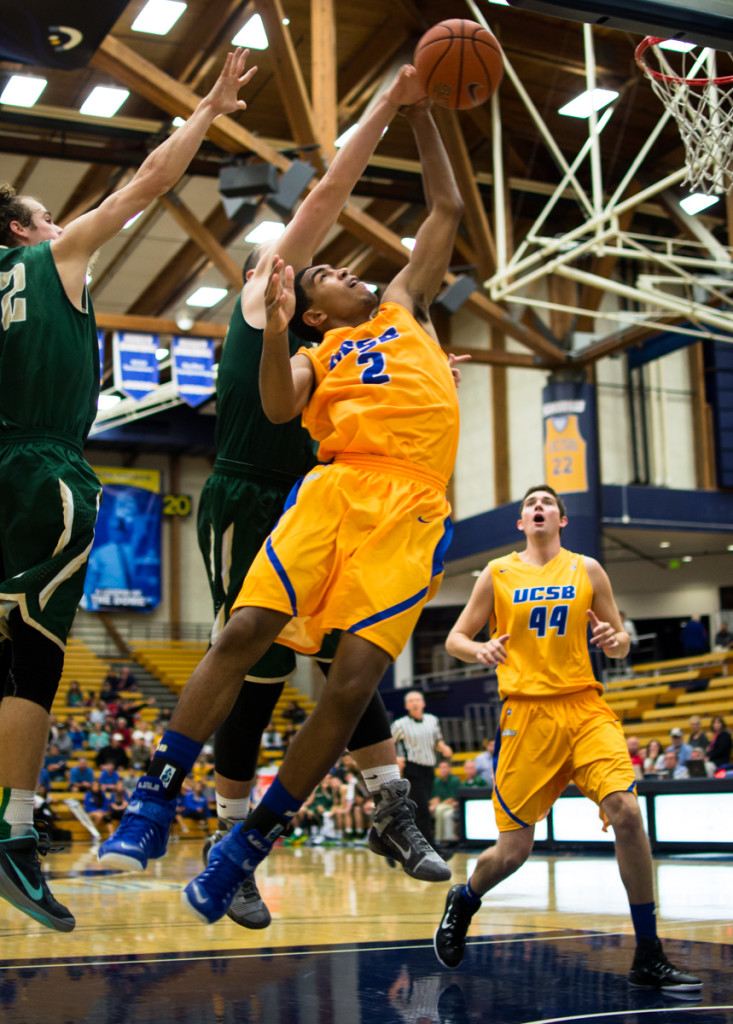 Not since 2008 has the UCSB men’s basketball team faced an opponent ranked in the top five in the nation. That all changes tomorrow however, as the Gauchos enter one of the loudest environments in college basketball to play against No. 5 Kansas on the road.

“I don’t think there is any way to recreate what type of environment we’re going into,” junior guard Michael Bryson said. “I think it’s going to be upon us to make sure we handle the pressure and handle the hostility they’re going to bring to us, and make sure we can focus on what we need to do.”

UCSB enters Allen Fieldhouse after defeating Division II opponent, Point Loma, 70-54. In that game, senior center Alan “Big Al” Williams showed his dominance in the low post as he totaled 20 points and 19 rebounds. Despite the win, the Gauchos will have to limit mistakes it committed against Point Loma, primarily in the turnover department, if it plans staying on pace with the Jayhawks.

Kansas is one of the most storied programs in all of college basketball. The program has won three national championships with its most recent coming in 2008. Kansas is coming off two exhibition wins, most recently against Emporia State where the team won 109-56.

This will be the toughest away game for the Gauchos, who will rely on team chemistry to survive high-pressure situations in the game.

After losing two players picked in the top three of the 2014 NBA Draft in Andrew Wiggins (Minnesota Timberwolves) and Joel Embiid (Philadelphia 76ers), Kansas is still the experts pick this year to win the Big 12 conference title and contend for a national championship.

Kansas centers on a talented crop of freshmen that are rated among the best in the nation. Five-star recruit, power forward Cliff Alexander is expected to make significant impact as he is a  projected starter on the team.

Alexander, at 6’8’’ and weighing in at 240 pounds, will look to command the post and go head-to-head with Big Al. The freshman is known for his strength, athleticism and rebounding capability.

“He’s really long-armed, very bouncy off the floor, got a big strong body,” Head Coach Bob Williams said. “I’m anxious to see if Al gets it going, if they actually allow one guy to guard him. Normally most everyone we play, they double team him. So it’ll be interesting to see if Kansas immediately surrenders to that and tries to double team him.”

Although the freshmen will grab the headlines for Kansas, the team’s best player must be junior power forward Perry Ellis. Ellis is the team’s second leading scorer from last season at 13.5 points per game, but is looking to increase his point total this year as he becomes the leader for Kansas.

For the Gauchos, limiting second chances point and blocking out will be key considering KU’s athleticism. Defensively, Santa Barbara will rely on a half-court game to limit fast break opportunities and deter any chance of the crowd getting involved. Big Al will again be the go-to guy on offense with shooters on the perimeter stretching out the floor for open shots.

Tip-off against Kansas is scheduled for 5 p.m. and will be available to view on ESPN3.

A version of this article appeared on page 9 of November 13, 2014’s print edition of the Daily Nexus.