The Daily Nexus
Previews: What's Going On
Why You Should Buy a Ticket for Foster the People This Saturday
November 12, 2014 at 11:49 pm by Spencer Phillips 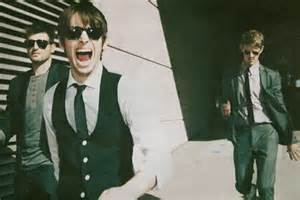 Foster the People is playing the Santa Barbara Bowl this Saturday, Nov. 15. Here are three and a half reasons why you should go buy your ticket.

Because You Love Them.

Let’s face it, Foster the People is pretty awesome. They have vaguely beachy/dancey pop music, Mark Foster has an interesting voice and the three of them are pretty darn attractive, which is something you can’t notice listening to a studio recording. And even if you don’t like Foster the People — in which case you should move out of California now — a relatively new artist, Soko, was hand-picked to open. She’s originally from France, but her music is a lot more Regina Spektor than Yelle.

It’s Kind of Nearby.

It’s also hella close, considering that it’s just downtown at the SB Bowl, only 30 minutes by the 24x bus — which, by the way, is free, so compare that to driving to L.A. or wherever you go for your concerts. Additionally, because Santa Barbara has three different colleges, the crowd will likely just be a mosh pit of college-aged students bouncing to the bouncy music. And if it’s not, then there will just be a bunch of middle-aged people doing it, which is cool.

It Will Be Weird.

Okay, I (mostly) lied about the mosh pit. While there is a small standing section right by the stage, nearly every other seat is sitting because SB Bowl is far better designed for concerts with classical music or meditative rock ballads than it is for Foster the People. But even if you’ll be bummed out because you reserved a seat but want to mosh — relax! You’ll probably be able to mosh anyway; and if your joy gets utterly killed, you have the opportunity to look around at the unique mood the setting will inspire.

And finally, you should come because I’ll be there, and I’m a pretty awesome person (if you can forgive my sass).

To get tickets to Foster the People, go to ticketmaster.com/event/09004CD3D16BC3BE?&brand=nederlanderla&camefrom=cfc_ndrcon_sbb_foster_SBB.