The Daily Nexus
Feature
Getting Into Focus: Nexus Explores ‘Study Drug’ Use Among Students
November 6, 2014 at 5:00 am by Christopher Chen and Carissa Quiambao 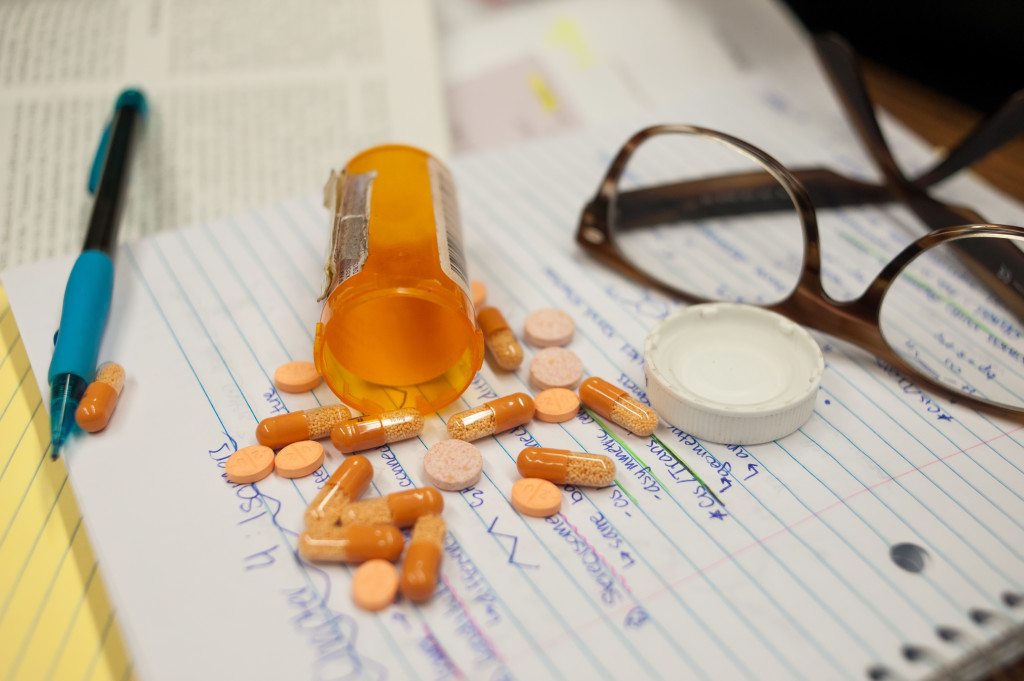 According to a Daily Nexus survey, 40.7 percent of students have tried a psychoactive prescription drug at least once. Kenneth Song/Daily Nexus

There are just 48 hours between now and your upcoming midterm, and still another 100 pages to read, another 20 identification terms to memorize, another three weeks worth of slides to go through and a whole six-page paper to write.

After calculating the work-to-time ratio necessary to do well on your exam, you find yourself at a debilitating loss. Locking yourself away in the well-lit dungeon that is Davidson Library, after three anxiety-ridden hours trying to start your work, you have found yourself unable to do anything but scroll through Facebook, watch cat videos on YouTube and edit last weekend’s Instagram photo. After a solid hour Wikipedia-ing everything there is to know about your favorite DJ and the spread of Ebola from South Sudan, you decide enough is enough.

So you send a text, find your friend with “connections” and find the solution to your academic problems placed delicately into the palm of your hand — a tiny pink pill with big implications: Adderall, also known as the “study drug.”

Prescription Drug Use at UCSB

Adderall, a psychostimulant drug used to treat attention deficit hyperactivity disorder (ADHD), is just one of many pharmaceutical prescription drugs students take for help studying or for recreation. According to statistics gathered by a Daily Nexus survey randomly sampling 376 students, 40.7 percent of students have tried some psychoactive prescription drug at least once in their life and 35 percent have tried Adderall at least once, with 25.4 percent noting that they did it specifically for school and only 1.1 percent stating that they used it specifically for ADHD.

The survey has also found that some students take amphetamine stimulants such as Vyvanse, Dexedrine and Dextrostat as well as benzodiazepines such as Xanax, Klonopin and Ativan to study, for recreation, to treat medical conditions or for other purposes.

According to Alcohol & Drug Program Director Jackie Kurta, the statistics “sound accurate,” as many students who come to Student Health seek consultation and treatment for ADHD or attention deficit disorder (ADD) either because of concerns about their condition or because they feel medication “can help them study, help them concentrate, can help them prepare for tests.”

“The percentage of students who say that they have tried it are probably not using the medications as prescribed … but reporting their uses more as experimentation or [to] improve their study habits or study skills,” Kurta said, “particularly for Adderall.”

Indeed, according to the Daily Nexus survey, 87.7 percent of students who have used Adderall do not have a prescription.

Between the immediate gratification of a text and computer access and the Internet’s speed [and] the need to be multitasking these options all day long … we tend to distract ourselves quite a lot and don’t give ourselves the opportunity to focus as much. — Jackie Kurta

“These are very potent medications, and they need to be properly assessed, properly diagnosed, properly dosed and properly managed.” Kurta said. “We certainly don’t want to give people the impression that anybody can take anything and it’ll help them. There are risks.” 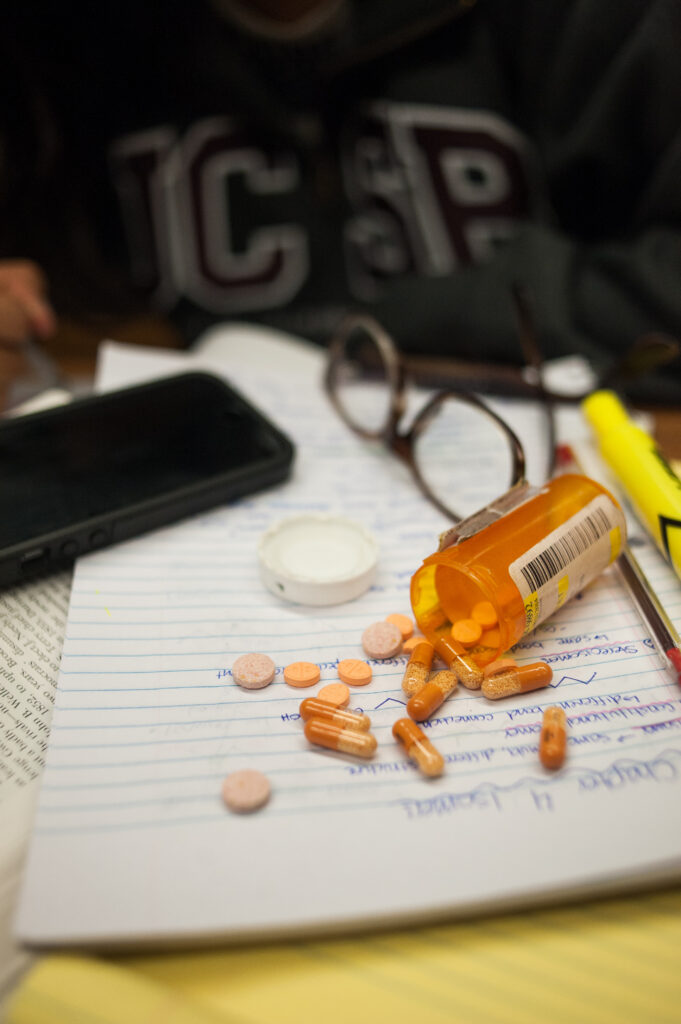 Lecturer Kendall Hassemer believes the use of these drugs may be due to increased academic pressure and over-stimulation of students’ current surrounding environment. Kenneth Song/Daily Nexus

Alcohol & Drug Program therapist Lacey Peters said she is not surprised by the survey results, as students oftentimes manipulate doctors to get prescriptions to amphetamines in order “to help them study better,” not necessarily to help behavioral disorders.

“Students tend to experiment,” Peters said. “Nowadays, pills have become very accessible and pills can seem unassuming. People tend to think that there’s a reduced risk with Adderall because so many people are prescribed it when really there are risks involved. You don’t know how your body will respond to it.” Peters also said she doubts many Adderall users have prescriptions.

Why Are So Many Students Doing It?

Exercise & Sports Studies 2 (ESS2)/Substance Abuse lecturer Kendall Hassemer said students are facing increasing pressure within the education system to “perform perfectly,” which sets students up for cycles of high anxiety, depression and drug-seeking behavior in order to cope with stress. According to her, these problems are symptomatic of the overstimulation students are inundated with in the 21st century.

“I do believe that this greater focus on ADD/ADHD is due to increased awareness as well as continual nervous system exposure and overstimulation of the current surrounding environment,” Hassemer said in an email. “Research has shown that internet/communications and electronic devices alter neurotransmitter and brain function over time.”

Kurta agrees and said she thinks prescription drugs are used among students who do not necessarily have behavioral conditions but in actuality need “a quick fix to be able to blast through [studying].”

“I think it’s kind of a byproduct of the way our society is now operating in terms of our ability to multitask,” Kurta said. “Between the immediate gratification of a text and computer access and the Internet’s speed [and] the need to be multitasking these options all day long, I think we do in ourselves promote this idea that we can’t focus on any one thing when in fact we tend to distract ourselves quite a lot and don’t give ourselves the opportunity to focus as much.”

According to second-year economics major Michael, with constant increase in pressures from the university to academically succeed and with pressure at internships or jobs to excel, “study drugs become more and more of a thing” as more students feel as though they must compete with one another.

“The fact that students know [the dangers] and still take them, even relying on these drugs, just shows the types of environments and pressures that are put on all of the students of the U.S. education system,” he said.

I have friends that didn’t want to try [prescription drugs] but with the pressures of school and the easy access to them, they ended up using them … They are addictive drugs and if you abuse them, they will be detrimental and they’ll be useless in the context of academics. —Quinn

Second-year engineering major Kenneth said that while the use of study drugs may seem to help, it can create a psychological dependence that would not have been previously there.

“I have heard from friends I’ve talked to that they are great and even if they don’t make you study harder they make the process more enjoyable,” he said. “On the other hand, some have said that they often think if they had never started [taking these drugs] they wouldn’t need it now.”

However, according to fourth-year political science major Nikolai, the use of prescription drugs such as Adderall is not as detrimental as some claim it to be.

“I take Adderall on an occasional basis and it has no apparent long-term detrimental side affects. It has certainly saved my ass on more than one occasion in an academic respect,” Nikolai said. “I feel like it won’t be the last time it will.”

Fourth-year psychology major Quinn said she thinks that the overuse of drugs, at least at UCSB, stems not just from the pressure to succeed, but also from easy access. She said that even though these drugs are legal, “they are still, very much, drugs.”

“I have friends that didn’t want to try [prescription drugs] but with the pressures of school and the easy access to them, they ended up using them,” she said. 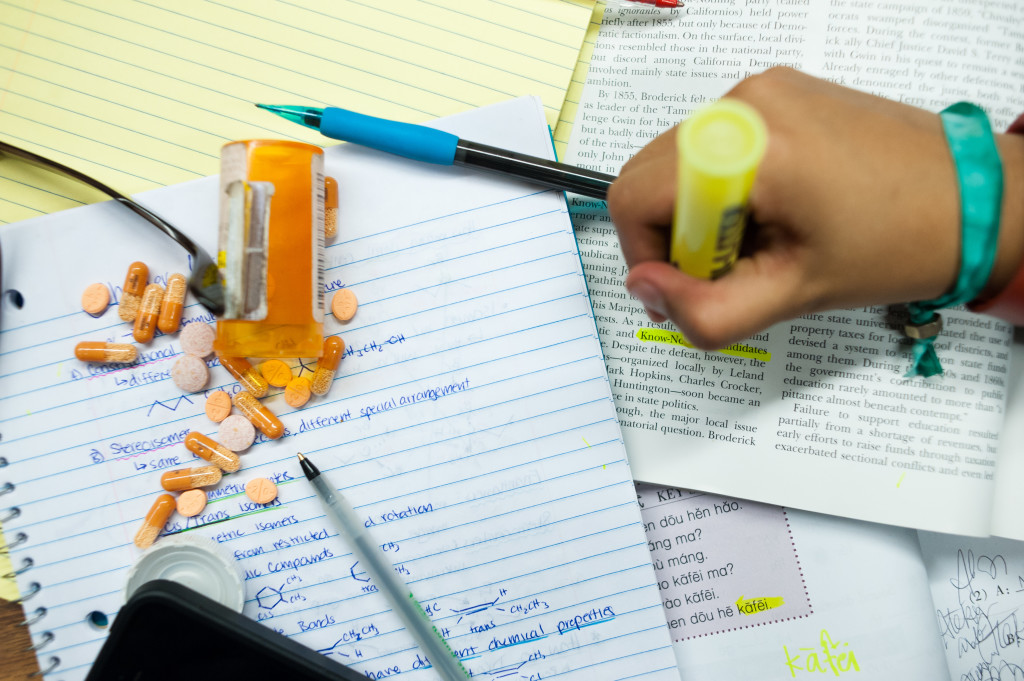 Fixing the Symptoms Instead of Solving the Problem

According to Kurta, a lot of students that come to the Alcohol & Drug program find themselves turning to not just “study drugs,” but also to anti-anxiety medication such as Xanax in order to feel relief from stress or trauma.

“They do talk about the fact that some of their use is prompted by a feeling of some relief from stress, relief from anxiety — many from feelings of depression, or loneliness or traumatic situations that have occurred,” Kurta said.

Peters agreed and said that widespread use of benzodiazepines such as Xanax, Klonopin and Ativan can lead to detrimental and even possibly fatal results.

“With Xanax, a lot of people think its fine since it’s so widely prescribed for anxiety, not realizing they’re very potent,” Peters said, “especially when accidentally or purposefully mixed with alcohol, it can be deadly.”

According to Hassemer, our continuously competitive academic environment coupled with college students’ natural inclination to experiment are both elements that factor into student inclination to abuse pharmaceutical drugs.

“The high-stress environment of a college campus, linked with exposure to prescription drugs, and even natural curiosity of this age group, makes it more likely for experimentation and dangerous, even life-threatening habits to form,” Hassemer said.

And aesthetic experience is one in which your senses are operating at their peak … An anesthetic is when you shut your senses off and deaden yourself to what’s happening. And a lot of these drugs are that. We’re getting our children through education by anaesthetizing them. — Sir Ken Robinson

So let’s say school is the problem. Then what? When all is said and done, is there anything anyone can do to mitigate the prescription drug problem?

According to notable author, speaker and international advisor in education Sir Ken Robinson in a Royal Society for the encouragement of Arts (RSA) lecture titled “Changing Education Paradigms,” diagnosis of ADHD has risen in parallel with the growth of standardized testing, a phenomenon which he said is no coincidence.

“Our children are living in the most intensely stimulating period in the history of the earth,” Robinson said in the lecture. “They’re being besieged with information and calls for their attention from every platform — computers, from iPhones, from advertising hoardings, from hundreds of television channels — and we’re penalizing them now for getting distracted. From what? Boring stuff at school, for the most part.”

Robinson, who points out that the public school system was modeled to meet the needs of industrialism in the 19th century, advocates for a reassessment of our current education model in order to meet 21st century standards. He also points to Ritalin and Adderall as “quite dangerous drugs” given to students to force them to focus in a model of education that is outdated.

“And aesthetic experience is one in which your senses are operating at their peak … An anesthetic is when you shut your senses off and deaden yourself to what’s happening,” Robinson said. “And a lot of these drugs are that. We’re getting our children through education by anaesthetizing them.”

According to Robinson, the increased usage of prescription drugs points to a necessity to change the educational paradigm. This means doing away with Industrial Age methods of schooling such as ringing bells, separate facilities specialized into separate subjects and separating school children by age. Instead, Robinson states that we must start looking at ways to encourage creativity and divergent thinking into the school system.

Whether his advice rings true or not, one thing is for certain — a significant chunk of students are medicating themselves in order to get by, and unless either students or school systems change, prescription drugs are here to stay.

This story appeared on page 7 of Thursday, November 6, 2014’s print edition of the Daily Nexus. Some names in this article have been changed on condition of anonymity.