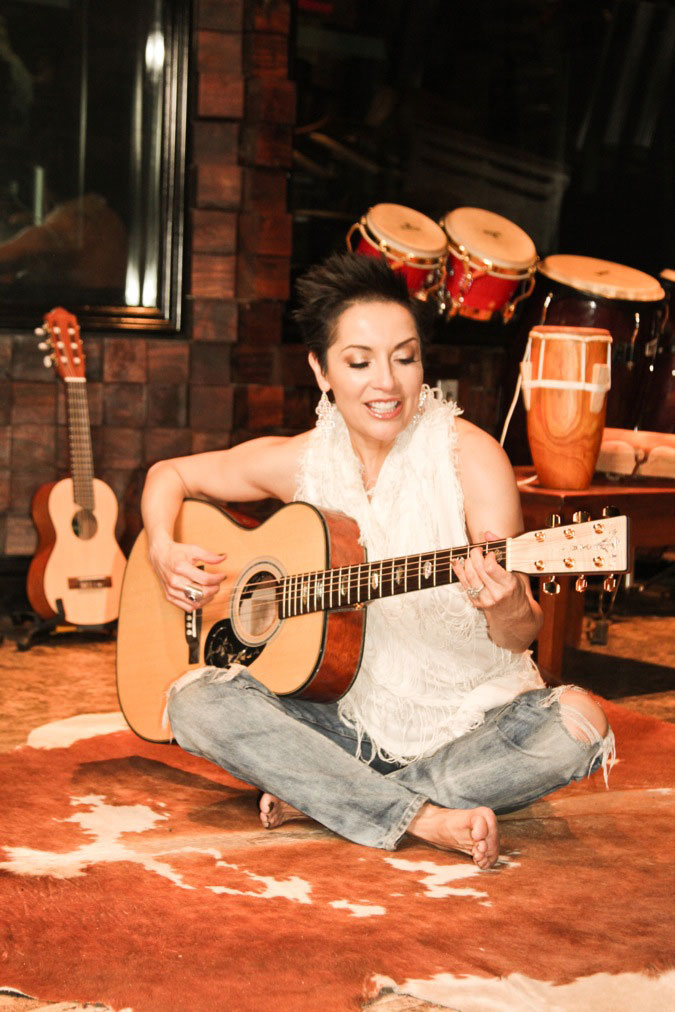 “According to my mother, I sang as an infant,” Margo Rey, a singer-songwriter reigning from Arlington, Texas, revealed to me when our interview began. “My very first live performance was when I was four years old. I sang for about four hundred people.”

We sat together in a tiny green room — or what technically should have been called a magenta room, as the walls were painted a warm shade of pink. Rey sat before me dressed in all black, a shirt tied in the front, tight pants and boots embellished with gold studs. All in all, the 48-year old looked fierce.

Huddled together on a black leather couch, we talked about how her very early beginnings with music launched her headfirst into the business. “It’s my first memory. I’m on stage and there’s a spotlight and I can see my shadow really, really big … and I’m holding a microphone and everybody’s giggling,” Rey said. “I was hooked and wrote my first song at sixteen.”

Born Margarita Reymundo, Margo Rey has been involved in various aspects of show business over the course of her life. Involved in musical theater and voice acting, part of her repertoire is the voice of Carthay Hotel Pekingnese in the 2008 Disney movie “Beverly Hills Chihuahua.” But making music had always been her first true love, and in 2009, she self-released her debut album My Heart’s Desire.

Channeling her musical experience with classical music and especially jazz, My Heart’s Desire became the embodiment of her own style of music: Organica. “The whole jazz influence —knowing I wanted to write music — I morphed my own music and called it ‘Organica.’ Everything evolves organically onstage with our musicians. Everything is very warm and very…” — she laughed — “organic.”

Organica is characterized by “down tempo ambient” sounds and largely centers on guitars, keys and jazzy vocals. But when examined closer, it is obvious that Rey’s music showcases not only her artistic talent, but also her beliefs and values as a person. “I think if you listen to my albums, either My Heart’s Desire or Habit, it’s very insightful as to who I am as a person … the way I feel about certain issues, the way I felt,” said Rey. “Habit is thirteen songs and each explains a human condition from absolute head-over-heels in love to revenge to wrath to greed. It kind of lays out the human condition for me. I feel like your habits become your deeds, so you have to choose your habits wisely.”

After hearing Rey speak about her philosophies on life and how those philosophies contributed to the stories told in her music, I decided to ask her for some words of wisdom for a young and lost college student. “Number one — have self esteem,” she said with a smile. “Find your own voice. If you’re just trying to carve a path artistically or politically or financially, don’t be like anyone else. Take a risk, it’ll be worth it.”

Before ending the interview, I asked Rey what the happiest moment in her long career has been so far. “Happiest moment?” she said, contemplative. “I think it’s happening right now, you know? We’re travelling all over the country, [we] have songs on the radio. It’s definitely now and to come.”

Her electric performance certainly proved her words. Shining on stage, Rey and her band kicked off their set with the groovy “Get Back” (also known as “the Porn Song” between her and her husband, Ron White). “Habit,” her hit that broke the Billboard charts at #28, followed with the same amount of contagious energy. Swinging her hips, she delivered smooth vocals that made dancing impossible to resist despite the formal sit down format of the venue. By the time her last song came on (after about three encores), everyone was on their feet, clapping and swaying along with her upbeat “Organica” style.

When Margo Rey was onstage, warmth spread throughout the venue, and it wasn’t just the candles that illuminated the tables in front of the stage. It was her interaction with the diverse crowd — the energy that she gave and the energy that was given back — that unified SOhO and made apparent the impact of her music upon people of all ages.

For more information on Margo Rey, go to margorey.com.