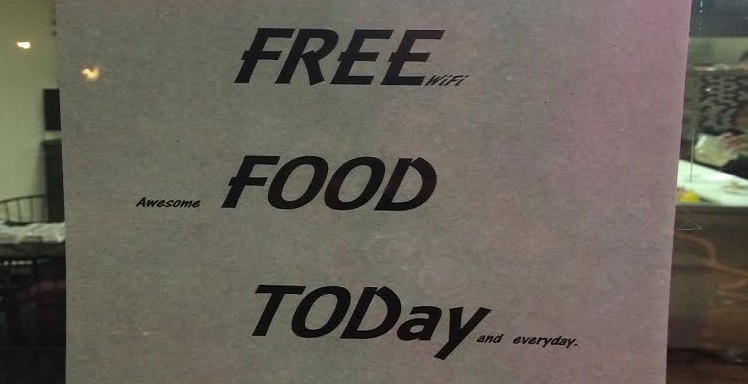 Lovin Oven almost had us with this one. Frankie Horne/Daily Nexus

I approached Lovin Oven the other night flanked by one friend as eager as I was to try something new and another friend determined to hate it. The less adventurous one of us joined begrudgingly on our trek to Trigo only after facing the prospect of sitting solo in the DLG, and though he didn’t know what shawarma was, he did know that he’d find it vastly inferior to whatever his preferred dining commons was offering that night. When we walked up the ramp of Lovin Oven’s patio deck to find ourselves the only customers in the little joint, I half-feared that he would be right. 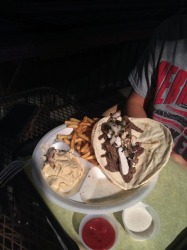 Aside from the husband-wife owners, Kenny and Carla, and a little kid running around playing with his toys, the place was empty. But what dismayed me more than the absence of any other patrons was that the spits on display behind the counter were off! How would the meat be as juicy or flavorful as it should be without being shaved off of a hunk that’d been rotating for hours in advance of me placing my order? Refusing to let on to the others that I thought anything was wrong, I went ahead and ordered a beef shawarma wrap, coupled with an extra combo of hummus and pita, while my accomplices picked up twin orders of beef shawarma plates with fries on the side.

We grabbed a table on the outside deck, noting the “hordes of I.V.ers” rolling down Trigo, and came to the agreement that the 127-flavor Coke Freestyle machine in the corner was “a pretty big deal.” Curious as to how the duo inside would prepare our food sans-spits, I spied Kenny frying up some beef on a large griddle.  Though I can’t say I didn’t raise an eyebrow at this, I kept my mind and mouth open.

Carla brought our plates out and we dug in without hesitation. I went straight for the hummus, tugging off a piece of pita and dipping it into the smooth stuff.  The spread was creamy and subtle in flavor, simple and good.

As I took my first bite of the wrap, my fears were, for the most part, eased. The meat, lettuce, onions and sauces complimented each other naturally and well. The slight edge to the garlic and spices was finished off smoothly with the soft flavor of the pita, which was chewy without sacrificing its crispness. I will note that, personally, I felt that the protein-to-veggie ratio of the wrap was a bit off; the lettuce at times overwhelmed the meat, and I found myself eying the plentiful pieces of beef on my friends’ plates enviously a couple of times. Still, the flavors of the wrap worked well enough together that I was able to overlook the tiny annoyance. 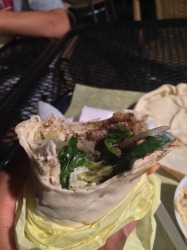 “The protein-to-veggie ration might be a little off.” Frankie Horne/Daily Nexus

After taking the last bite of my own food, I reached over, and over and over to the adjacent plates to steal fries. It’s a strange fact of Americanized cultural cuisines, and don’t ask me why, but Mediterranean places always have great freakin’ French fries. They were perfectly greasy, reminiscent of food you’d get at a county fair, and they paired perfectly with hummus.

Overall, I enjoyed my taste of Lovin Oven. Even my companion who had decided to hate it before he’d tasted it replaced his disdain with genuine satisfaction. I know I’ll be checking in to grab another taste when the place is busier to try their shawarma straight off the spit. As we finished up our meal, a few more patrons filtered in. One sat down at a table behind me and told a friend of his that the place “smells like home.” I’d say Kenny and Carla have made a good home for themselves tucked away here in I.V., and I was glad to be invited in.