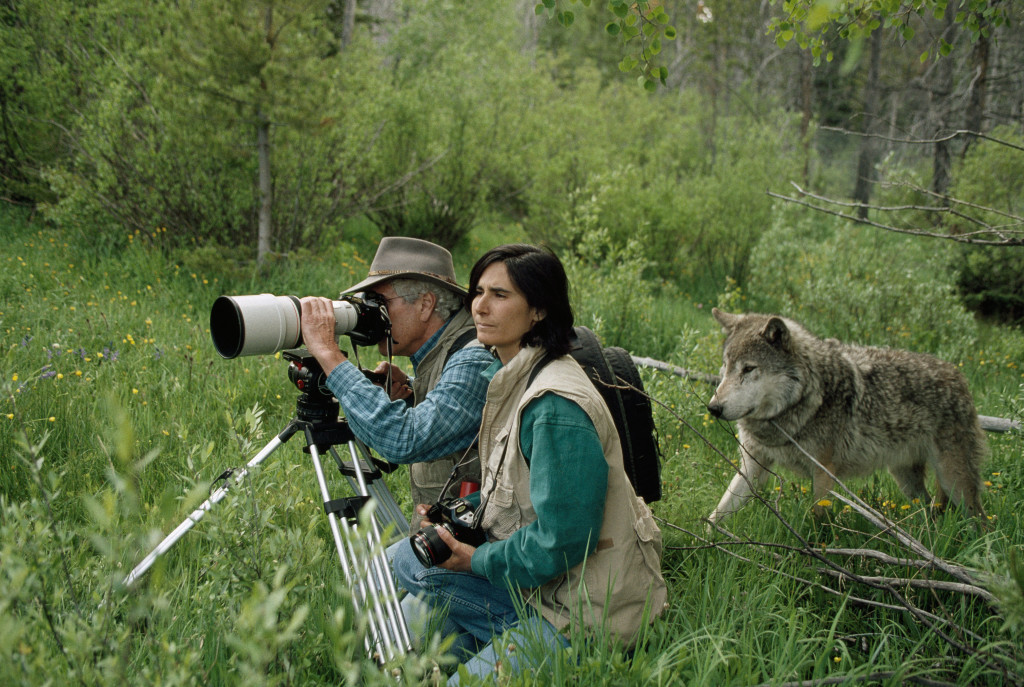 Campbell Hall smelled novel and inviting as I stepped into its welcoming doors to await UCSB Arts & Lectures’ National Geographic LIVE! presentation featuring wildlife photographer couple Jim and Jamie Dutcher. The hall was nearly packed and a heavy chattering permeated the air as I made my way to the front row seats, noticing that most of the attendees were older gentlemen and ladies. A number of children sat surprisingly still next to their parents, contributing to a relaxed, genial atmosphere as the lights dimmed.

The sound of chirping birds and howling wolves came from the speakers as the screen changed from the ¨Nat Geo Live¨ title to a series of clips showing the heroic adventures and risks photographers and documentary film-makers take to follow their story. After this exciting introduction, the Dutchers were announced to the sound of applause from the packed theatre. The couple stepped into the stage lights and began. In a multimedia presentation that spanned the six years of work that the Dutchers had committed to, the couple shared their experiences, both heartbreaking and inspiring, that they had on their journey. A series of clips, intermittently spread between their lines, centered on the wolves and the couple’s interactions with the wolves. The sense of daring and excitement held the audience captive.

Jim and Jamie Dutcher began with how their journey began. In 1990, the couple started the Sawtooth Wolf Pack project. The Dutchers were able to secure one of the largest enclosures of wolf preservation areas at the time, solely to let the wolves roam freely. This project with the wolves initially began as only another story, and was never a long term investment. “We never dreamt that the wolves would affect us so deeply or that our life with them would go on so long,” said Jamie Dutcher. 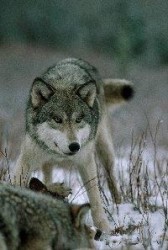 Because of the skittish nature of the wolves and their reactivity to human observation, the project required a more innovative approach than had ever been done with wolves before. The two were able to get a couple wolf pups from a friend and raised them in a research enclosure in the Idaho Mountains. Through the next six years, they watched the pack as they endured through hardships and trials. The death of one Omega wolf shocked the whole wolf pack and sent them into mourning. This experience had a profound effect on the Dutcher’s work as they were able to observe the role of the Omega wolf within the pack structure. Through witnessing these events, the Dutchers were able to get a better understanding of the nature of the wolves.

Sadly, their work with the pack ended when the lease on the land in the Sawtooth Mountains was not renewed. The pack was relocated and joined with another group of wolves living on Nez Perce territory. Those six years spawned a lifelong career of advocating for the return of the wolves and the foundation of Living With Wolves, an organization that seeks to inform the public about the benefits wolves bring to nature. In writing books and giving talks on college campuses like UCSB, the Dutchers’ compassionate storytelling made me feel as if I had met the wolves myself and they taught me empathy for these animals.

Sitting down for an interview with them was a pleasure. Although short on time and tired from their two-hour talk, they gladly answered all my questions and were forthcoming in their thoughts. On their future plans, the Dutchers said that they ¨felt that, as [we] said, the wolves gave us so much that it was time for us to give back to them.¨ The misunderstanding and hatred that engenders the response from the public was something that the Dutchers sought to fight against.

When asked about the perplexing nature of their previous work, Jamie Dutcher jokingly said of her husband, ¨He evolved slowly onto the land!¨ Jim Dutcher further explained, ¨Ï started my film-making underwater and sea turtles were one of those things and the beavers … and I didn’t think … it would go on this long … I thought it was going to be another subject …¨ 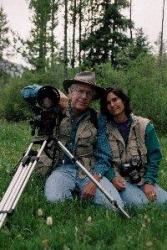 They even had plans to go to Africa to study other animals, but as ¨this animal still needs a voice¨, they decided to stay. Both Dutchers encourage the common person to help the movement. “[Supporters should] be a voice,” they said. “Wolves were reintroduced [into the land] with federal tax dollars … wolves belong to all of us.¨ Motivating the common voter into a grassroots movement is something that the couple is very interested in.

Jim and Jamie Dutchers’ life’s work is an inspiring journey of love and companionship that they shared with the often maligned grey wolves. Having won three Emmys for their documentary work, writing three books and founding a wolf-conservation organization, Living With Wolves, the Dutchers are true advocates for the return of the species.

Though their work has been successful, it is far from done. Many states still legalize or even incentivize the hunting of wolves. To campaign against this, the Dutchers’ Living With Wolves Foundation educates and informs people about the wonderful animals that wolves are.

For more information on Jim and Jamie Dutcher, go to livingwithwolves.org/wwd_a_jim.html.

The Wolf like any wild animal has right to exist in its natural state. This right does not depends of your utility for man, derived from that of all living beings to coexist with him as an integral part of the ecological systems.

It is so exciting to see that Jim & Jamie will be coming to a town near me. I had adopted a wolf from The Sawtooth Pack…and try to see if I could keep up with them.
I will definitely be coming to your presentation, in Feb. 2015.
I so look forward to seeing and speaking with you…
Thank you for all that you do to help, educate folks and to protect OUR wolves.

It is so sad there are those who choose to jeopardise their own survival out of fear and greed. Without ALL of our wildlife, Mankind will soon be extinct – No wildlife = No Human life. GOD knew what he was doing when he created Man last – Let’s not mess it up for future generations.

If you visit Oregon – we would love for you to tour our White Wolf Sanctuary and visit with our Arctic wolves.
Thank you for your love and devotion to these amazing and so necessary animals!

This made me cry. I have always had a deep admiration of, respect for and love of wolves yet only saw them in a zoo in Kansas City. I envy you and the time you spent living with them and having them so close as to touch and be touched.

I watched “Living With Wolves”. What a delightful and informative video. I recently heard that Idaho is killing their wolves. What a crime against Nature. I wrote to the Idaho Tribue and said how important wolves are to forests. We hope this senseless killing is stopped as soon as possible.
Best Wishes for all your great work.