The Daily Nexus
Music
Yellow Red Sparks Fly as The Kinds Join In at Muddy Waters
October 31, 2014 at 6:42 pm by Alexandra DeSanto

Making my way past the shelves of knick-knacks and through the powerful aroma of coffee sizzling in the air, I found a cramped spot in the crowded coffee shop to catch two shows — The Kinds and Yellow Red Sparks. As a first-timer at Muddy Waters Coffee House, which is just a mile away from the bustling excitement of State Street, I immediately felt at home. Its dim lighting, art-filled walls, funky light fixtures and vintage couches gave the venue a cozy and relaxed feel. Enthusiastic members from all over the Santa Barbara and greater SoCal area welcomed the two Cali-based bands to the scene last Friday night, Oct. 17 as a part of the New Noise Conference and Music Festival. 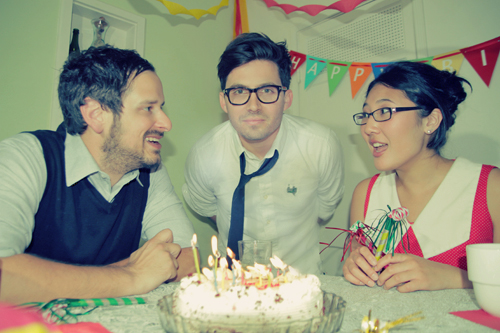 They began their set with the clacking of drumsticks followed by an energetic song called “My Machine Gun,” one of their more spirited and upbeat numbers. This tune quickly drew in a crowd to the main area of the coffee shop, with attendees bopping their heads and swaying their bodies to the rhythm. Slowing down the mood of the locale, their second song “Buy Me Honey” revealed a more melodramatic theme. They continued to play songs off their self-titled album, including the popular “Scents and Sensibility” and “Monsters with Misdemeanors,” as well as new songs not yet released.

One of my favorite parts of the show was their rendition of Elvis Presley’s “Can’t Help Falling in Love.” Hanson asked the audience to sing along to “help break some ice,” which ended up bringing the crowd even closer together. The combination of Hanson’s dulcet voice with the melodic group vocals of the audience created a beautiful and dreamlike atmosphere.

The band’s cinematic/indie folk tunes and sentimental melodies fused together to produce uplifting and heartfelt anthems. Their fun stage presence also added to the intimacy of the set, making me feel lucky that I was able to be a part of something so inimitable. Closing out with a song titled “Seven Seas,” which the group announced will be coming out next month, the Yellow Red Sparks left a positive vibe behind in Muddy Waters.

After their set, I caught up with them on the sidewalk outside of the venue. When I asked how Yellow Red Sparks came to be, they had an interesting story to tell. “Basically, I was just doing coffee shop stuff and Goldy took some of my songs and added drums to it,” Hanson explained. From there, Goldy introduced Hanson to Nishikawa, an upright bass player who Goldy was teaching drums to at the time. The trio formed a band, and later added the fourth member, Mike, who the group affectionately calls the “newbie.”

When asked about the significance of their band name, Hanson laid out the dynamics for me. “The band name initially comes from our song entitled ‘Yellow Red Sparks,’ which is also a part of our self-titled album. To me, the phrase means passion, with the mellow color of yellow colliding with the vibrant color of red.”

Adding to this comment, Goldy mentioned that “the term mirrors the emotional push-and-pull that comes with relationships — both the loving and the heated parts.” These opposite emotions, which we all can identify with, were felt through the set as their songs encompassed expressions of both joy and melancholy as a way to meticulously depict all realities of what it means to be human. I could sense this up-and-down pattern as the band moved from song to song, feeling hopeful through one moment and feeling somber through the other.

These ideas tie in with the main themes of the band’s lyrics. “Our songs are about human stuff,” said Hanson in a whimsical manner. “They’re all about struggling with relationships and the challenge of maintaining faith and hope throughout it all. I like to call it the human struggle.”

I could tell that Hanson was deep in his thoughts by the way he stared at the concrete beneath him, hands in his pockets. For a second he collected his thoughts, a slight frown on his forehead. Suddenly he looked up and continued, “The goal for us is to affect people with music. We don’t just want it to be something that people bop their heads to, but to be something that makes people feel something.”

A genuine look on his face, Hanson left me with this message: “We want to connect with people and take that as far as we can, whether that’s to a hundred people or to thousands of people. As cliché as it sounds, we just want to change people’s lives through music.” 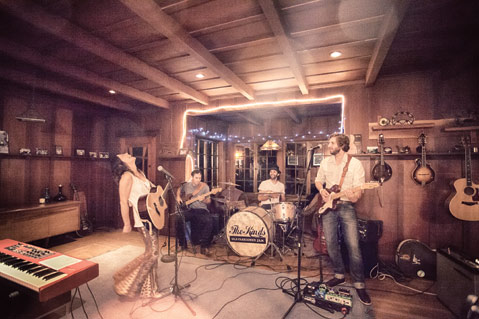 The headlining band, The Kinds, is a local group from Santa Barbara, Calif. Formed by Khasy Modisette (vocals/guitar), Nathan Modisette (bass), Anders Bergstrom (guitar/back-up vocals) and Erich Riedl (drums), the band hit the sweet spot for many locals and non-locals that have been anticipating the performance for months. While the band has played the New Noise Festival before, this was their first time headlining for the event.

They opened their performance with one of their most popular songs, “Been a Long Time.” This song combined the soothing rhythm of the guitar with the compelling female vocals of the lead singer, which immediately set a warm tone for the show. Elements of indie, folk, rock and country were apparent throughout their songs, fascinating the crowd with irresistible forms of musicianship that nobody could quite walk away from.

While their set included emotionally-striking songs that were a little on the slow side, they also included high-energy tunes that got the whole crowd to dance. The faster songs included empowering guitar solos and catchy melodies, while the slower ones transformed the venue into a wistful scene. While every song was unique on its own, each tune brought out romantic and heart-felt themes about love and equality.

The showmanship of the combo also created a folksy mood that perfectly complimented the relaxed feel of the coffee shop. Band members smiled often, sipping on beers. They even described one of their songs, entitled “Runaway”, as a “beer drinking song,” and quickly turned this anecdote into a drinking game by encouraging the crowd to take a sip from their brews during certain lyrics.

I stuck around after their set and had a chance to interview Modisette and Bergstrom as they were packing up their equipment. The lead lady singer told me about the creation of The Kinds, which sprang to life about five years ago. “Nate and I were playing together for a while when one of our close friends introduced us to Erich. Out of the blue, Anders showed up and starting playing with us,” said Modisette. “It all worked together really well, and the creation of the band was just kind of instant.”

From there, The Kinds have focused on playing local shows with more casual intentions. “Part of the reason why I love playing with this ensemble is that everybody is on a professional level, but we just do it for fun,” explained Bergstrom with a gleeful look on his face. “This is our passion, and being able to play and have a great time doing it is really why we’re here.” From what I could tell, the convivial response from their close-knit Santa Barbara supporters is all The Kinds really need.

Unlike most other bands, The Kinds have no desire to get signed. Apart from having daytime jobs and families to take care of, they come together as a band to focus most of their attention on enjoying the act of music-making. In regards to making it big, however, getting signed is one of their last priorities.

“It’s almost not even a consideration. It just doesn’t seem like us,” said Modisette. Nodding his head, Bergstrom laughably commented that each member comes “from different facets of the music industry, and there was this interesting moment that we realized that we could be as good as anybody but not be as stressed as everybody else.” All in all, The Kinds are just a good-hearted, small-town band who wouldn’t have it any other way.

As the night came to a close, it was certain that The Kinds’ nonchalant take on music and folksy tunes had once more left a warm impression on the guests of Muddy Waters.