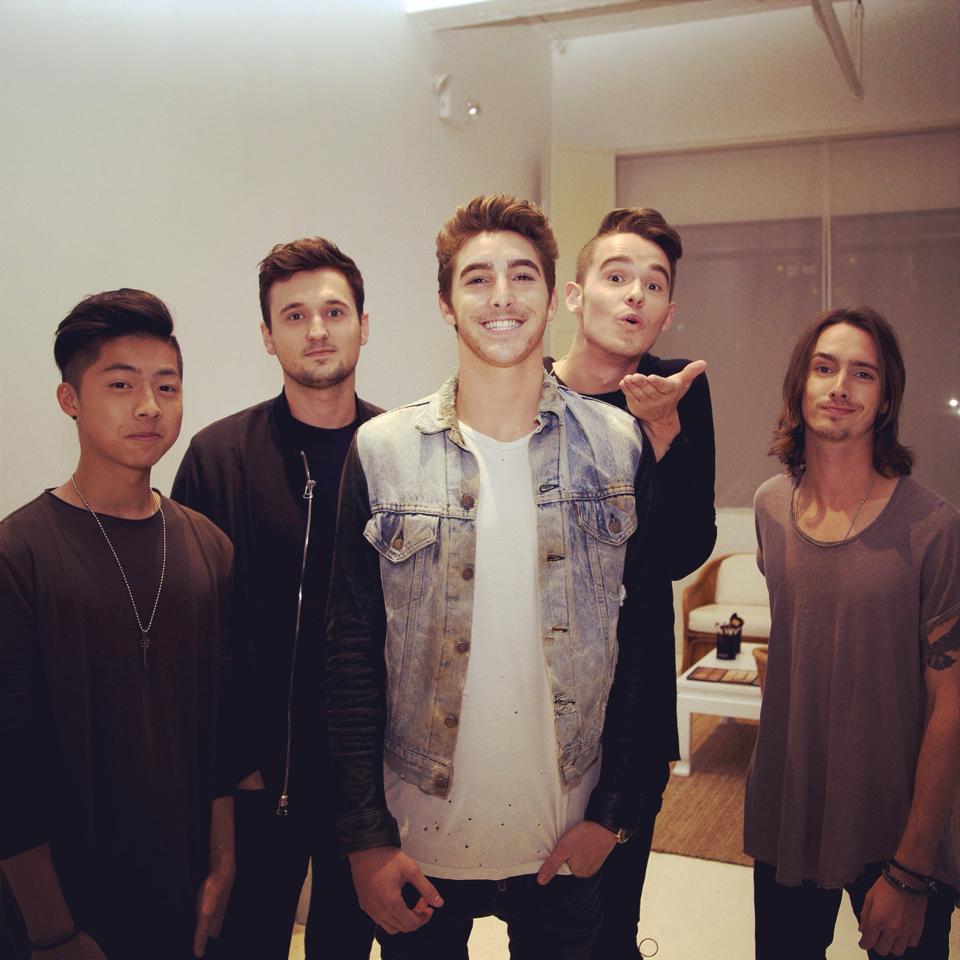 “I’m on fiyahhh!” Pop-rock group North of Nine’s lead singer Jackson Guthy shouted, energized by a full house. ­­Dressed in a tee and skinnies, Guthy charismatically eyed the screaming group of teenage girls lined along the walls, desperate for the boys’ attention. Drummer Rob Ketchum, bassist Edison Lo, keyboardist Nolan Frank and guitarist Michael O’Grady accompanied Guthy’s singing with synchronized hair-whipping and lyric-mouthing. Families relished in a candlelit dinner as the band rocked the evening with newly composed songs, which will constitute their first album. As part of the New Noise Conference and Music Festival, the group took the stage on Sunday, Oct. 19 at SOhO Restaurant and Music Club, a perfectly intimate setting for a sneak peak of their upcoming album. “American Idol” judge Randy Jackson, North of Nine’s producer, made an appearance at the concert to support and take pride in his new band.

The modern pop-rock quintet performed a set list of six songs including their debut single “We Ride,” which premiered on MTV in Sept. For this piece, keyboardist Nolan Frank stepped aside for the song’s writer and composer, Guthy, to play keyboard alongside rounded-out drumming and guitar. The ballad displayed the delicate side of the pop-rockers, leaving enchanted fans listening to the song on loop.

Emily Castro, a recent fan of the band, is looking forward to North of Nine’s first album. “[‘We Ride’] is so soothing. I almost wish Jack was serenading to me … But besides that, they’re gonna bring something fresh and I’m looking forward to it!” Castro said.

Sixth on the set list that evening was a cover of Jimmy Eat World’s top five Billboard Hot 100 hit in 2002, “The Middle.” The band brought back the vitality of Jimmy Eat World and had the audience up on their feet, clapping to the beat. Further information on the night’s set list cannot be provided until the release of their first album.

The group performed a variety of tunes throughout the night, taking their audience back and forth stylistically in their music. In sync with the current rock scene, the group labels themselves under modern pop-rock — which ranges from a mellower form of rock music to a subgenre of pop music. North of Nine appeals to the teenage age group with lyrics such as, “Lovin‘ you is like flyin‘ a rocket to the moon.”

The band created contagious, energetic vibes as they indulged themselves in their music. The newly-formed group interacted closely onstage with dynamic expressions and exaggerated movements. Ricky Vitucci, the quintet’s artist coordinator, insisted that the group’s exceptional chemistry exists both on- and offstage. “The chemistry is crazy good for five males in one room … they all have different ideas. They don’t fight; they don’t argue. The vibe is amazing. When they’re in the same room, they get raw ideas like this,” Vitucci said as he snapped his fingers.

After the performance, I caught up with bassist Edison Lo and he told me what fans should expect in the near future. “By the end of the year, we wanna release an album. We’ve been writing a lot, rehearsing a lot. Right now, we’re doing a bunch of demo songs,” said Lo. Vitucci added at the end, “You’re in for a treat.”

North of Nine’s new hit single “We Ride” is on iTunes and Spotify.

OMG SOPHIE THIS IS SO AWESOME