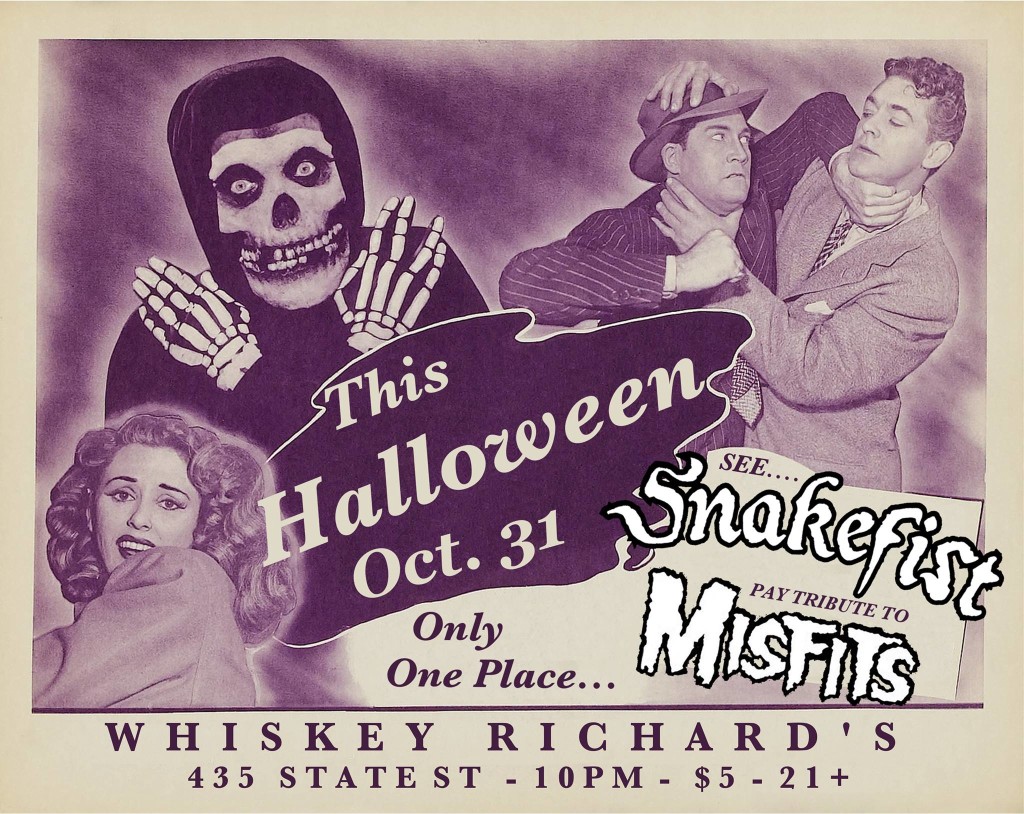 The California golden hour was just beginning to cool off as I arrived at Snakefist’s studio. Mike Johansson, the bass player of the up-and-coming hard rock band, greeted me in front of an archetypal Santa Barbara home.

Johansson, a relaxed classic rocker and fresh UCSB graduate, proceeded to give me a tour of the multi-unit space. “The owner is a surfboard shaper and he rents out different spaces for artists. There are a couple shaping bays, rooms for painting and this is our studio,” Johansson said. He wrenched open a large yellow barn door to reveal a clutter of keyboards, drums pieces and punky pop art.

The band cranked into a hard and fast Misfits set and blasted off the iconic punk song “Dig Up Her Bones.” Johansson jumped back into the studio to finish the beautifully horrific punk tune. Drummer Ethan Gordon hit the last crashes, cracked the snare a couple more times and then ended the song with the help of a righteous power chord from the lead guitarist and band founder Chris Vallee. As I listened, I remembered why the band is called Snakefist: their music punches you in the face.

The band filtered out of the sweaty jam room, Gordon lit a cigarette and stood in the doorway as Johansson lazily tossed some newly made flyers my way. “Check these out,” he said. “I mashed up old horror movie posters with our logo for our Halloween show. It’s going to be all Misfits,” he grinned. “All Misfits?” I asked.

Zac Stokell, the lead singer, perked up and said, “All Misfits! It’s gonna be sick man. You should come down — It’s going to be at Whiskey Richards!” Stokell stood over me, tall, lanky and shirtless with an energized and innocent smile exemplifying the charisma of a true frontman.

Whiskey Richards is Snakefist’s original stomping grounds and it always gets rowdy when they play. “How would you describe a typical show at Whiskey Richards?” I asked Vallee as he slumped into the seat next to me on the tiny sofa. Vallee was shirtless, his hair coming out from underneath a black cap and falling off his shoulders.

“Let’s just say that when we play Whiskey they hire extra security,” laughed Vallee. Snakefist shows are notorious for their madness and it’s very common for security guards to move audience members out of the way to break up fights in the mosh pit, clean up broken beer glasses or to make sure the girls dancing on the bar don’t fall off.

“We want people to have a good time, basically I just want to make music for people to party, fight, or fuck to. That would be insane if people did that to my music,” said Vallee with a chuckle.

The band’s honesty was juxtaposed by a healthy and humorous life philosophy: a philosophy without fear. Vallee especially understands fear because a little over a year ago he was looking death in its pupils. “What is that scar from?” I asked, referring to the scar that went horizontally underneath his pectorals and straight down to his naval creating a large cross on his torso.

“I had a double lung transplant. It was either get surgery or die, so I chose surgery. I had cystic fibrosis or CB,” said Vallee. “Once you’re that close to death you’re not really afraid of anything anymore.”

That attitude seems to work because in the last couple years Snakefist has played with some big names such as Red Fang, Five Finger Death Punch and the very band they are playing tribute to this Halloween: The Misfits. In addition to playing with the heavy-hitters of the metal scene, Snakefist recently got back from a full Midwest tour and played the music festival Rocklahoma.

“Going to weird random places was super cool, like we went to this one bar in Arkansas and these guys were telling us that all these murders go down on this one road because it just goes on forever, you know, so people dump bodies or whatever … We were tripping out. It’s the most random places [where] you come back with the craziest stories,” said Gordon.

Snakefist’s experience on tour and growing popularity has pushed them to realize how small Santa Barbara is in the worldwide music scene. “We’re moving to LA very soon, we need a bigger pond,” said Stokell. The band nodded in accordance, self-aware and honest about where they are and where they are going. “I mean we have a lot of work to do, we’re not fucking Guns ’n’ Roses,” said Vallee. “I mean not yet at least.”

Although Snakefist may be leaving Santa Barbara, they were adamant that they would bring pure bone crushing rock back to the coastal city even after the move. But if you want to see them before they’re big and famous and experience something downright invigorating, be sure to catch Snakefist this Halloween downtown at Whiskey Richards.

Snakefist will play Whiskey Richards on Oct. 31 at 10 p.m. for 21+ only. Tickets are $5. For more information on the band, go to facebook.com/snakefistmusic.