The Daily Nexus
On the Menu
New Shave Ice Shop Assuages Your Sweet Tooth
October 29, 2014 at 5:00 am by Mackenzie Hart 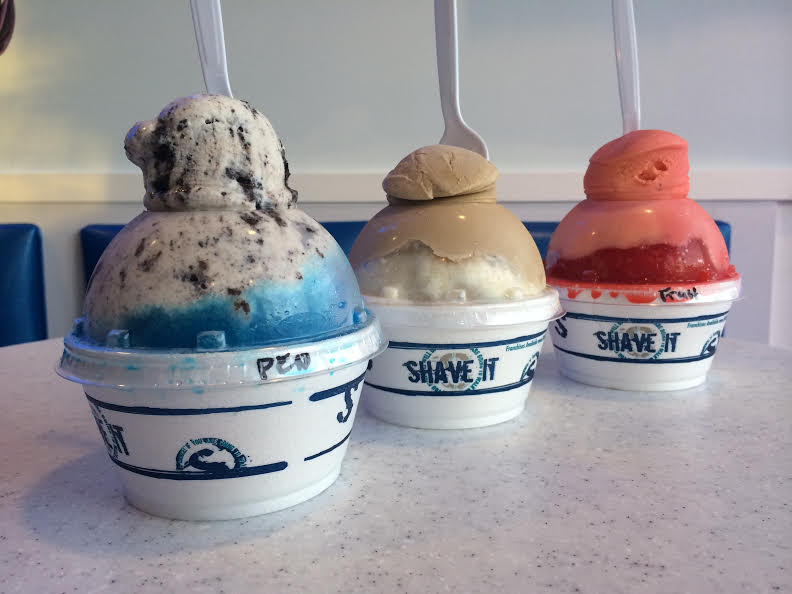 If ice cream and Hawaiian shaved ice made a baby, you would get Shave It. Shave It recently opened its doors at the beginning of September, just in time for returning college students with a sweet tooth to enjoy.

So how exactly does Shave It succeed in combining two similar, but very different desserts? As an ice cream fanatic, I stopped by the store located on Seville Road in Isla Vista to find out.

With two of my friends in tow, I stepped in and was taken aback by the dramatic change in scenery. Filled with blue lights, tall and sleek metal chairs and mirrored walls, I suddenly felt like a hip club-goer just by setting foot in this place. Mainstream music blasted from the speakers above my head, and as I approached the counter, I realized that underneath my feet was a super squishy mat. All of my senses were engaged and it was thrilling.

I finally arrived at the counter (the squishy mat distracted me for a good 10 seconds) and was greeted by a friendly second-year student who graciously pointed me to the menu. The system goes like this: you start with a size for the shaved ice (a small is $3.75 and a large is $4.25) and then choose up to two flavors of syrups. After that, you can choose to add ice cream for an extra $1.25 and toppings for 25 cents each. If there is one thing you should know about me, it is that I am the most indecisive person alive. So when the mile long list of syrups and ice cream flavors loomed over me like a tower, I admitted defeat and resorted to looking at the available combos.

If there is one other thing you should know about me, it is that if I could marry cookies and cream ice cream, I would. So naturally, when I saw the “#PenguinSlide” combo — a drool-worthy mix of blue vanilla shaved ice and cookies and cream ice cream — I was sold. My two other friends decided on the “#XFactor” (French vanilla shaved ice with Brazilian coffee ice cream) and the “#FruitBooter” (strawberry and jungle juice shaved ice with rainbow sherbet ice cream). Once we all ordered, we stepped back and watched the guy working the register get to work. First, the ice cream is scooped into a Styrofoam cup and then flattened to make a foundation for the shaved ice. After, the cup is moved to the shaved ice machine where shaved ice is put in and then majestically shaped into a dome. The ice is topped with syrup (syrup guns are a thing here and they are awesome) and then another scoop of beautiful, beautiful ice cream.

Eating one layer at a time of my #PenguinSlide, I started with the cookies and cream. The cream aspect was perfectly sweet and the Oreo bits were soft and delicious. Digging further to taste the shaved ice, I was pleasantly surprised by how it was not overly sweet, despite its artificially blue appearance. And then I combined the two together. The crunchy texture of the ice juxtaposed the soft, creaminess of the ice cream nicely. #XFactor was next. The coffee ice cream was nothing out of the ordinary, but the French vanilla shaved ice was appetizing and pleasantly flavored. Unfortunately, the #FruitBooter fell a little flat. The jungle juice flavor (basically fruit punch) combined with the sherbet was a sickeningly sweet combo and would probably be best separate. But then again, we tried that one last when we were already in a sugar coma.

Overall, Shave It did not go above and beyond my expectations, but it certainly makes for a fun and quick dessert fix, as well as a nice addition to the variety of sweet spots in I.V.