The Daily Nexus
Music
Looking Back at American Idiot, 10 Years Later: 6 Facts about the Classic Rock Opera
October 28, 2014 at 11:16 pm by Arasch Blurfrushan 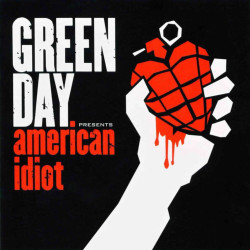 It’s been ten years since we first saw that white disembodied hand clutching the heart-shaped hand grenade tightly, almost as if it was for dear life. I used to wonder whether the owner of that fist ever pulled the pin, but looking back at the impact and influence American Idiot has had on popular music in the past decade, I’d say he did. American Idiot by Green Day hit shelves on September 20, 2004, and is classified as a rock opera, or an album with a story, a concept originated by The Who.

The album tells the story of a young punk who calls himself Jesus of Suburbia. Bored with small town life, he moves to the big city where he creates an alter ego: St. Jimmy, the cool, confident punk that Jesus has always wanted to be. He also meets a girl who he calls Whatsername and falls in love with her rebelliousness. The album was controversial at the time of its release, mainly for its charged political undertones and its criticism of the Bush administration and the mass media. In honor of the tenth anniversary of this classic album, here are six facts about American Idiot you may not have known.

1. The famous album cover was inspired by a lyric in the album.

The lesser-known track “She’s a Rebel” contains the line “she’s holding on my heart like a hand grenade.”

2. American Idiot exists because of a studio theft.

In the early 2000s, Green Day was working on a record called Cigarettes & Valentines, but when it was almost complete, the master tapes were stolen from the studio. Instead of re-recording the album, the band decided that the theft was a sign that the album was not their best possible work. They started from scratch and American Idiot was born. Surprisingly, the songs were never leaked by the thief.

3. Brandon Flowers of The Killers criticized Green Day for being anti-American.

The Killers’ rise to fame coincided with the launch of American Idiot. But their singer, Brandon Flowers didn’t appreciate Green Day playing their songs overseas. He said the concert film Bullet in a Bible, filmed in the UK, offended him because Green Day was making America look bad in the eyes of kids in other nations. “Where do they film their DVD? In England. A bunch of kids screaming ‘I don’t want to be an American idiot,’” Flowers said. However, in 2013, Flowers apologized to the band for his comments during a The Killers concert at Wembley Stadium.

American Idiot became a musical that used every song from the record as well as some songs from follow-up album 21st Century Breakdown. The musical premiered in Berkeley in 2009 before debuting on Broadway in 2010.

5. The release of American Idiot marked the second time Green Day had been criticized for selling out.

When Green Day first rose to fame with their third studio album, Dookie, in 1994, their friends and fans in the Berkeley underground punk scene ostracized them for signing to a major label. Ironically, many of the people that embraced them and the newly popular punk culture similarly lambasted the baned ten years later for their reinvented sound on American Idiot.

6. “Wake Me Up When September Ends” is not about 9/11, but the death of singer Billie Joe Armstrong’s father.

In September of 1982, when Armstrong was 10 years old, his father passed away. After the funeral he ran to his room crying and locked himself inside. When his mother came to comfort him he said from behind the door, “Wake me up when September ends.” Of course, having been released in 2005 when the September 11, 2001 tragedy was fresh in people’s memories, Americans found the song even more potent and powerful, creating the common misconception.