The Daily Nexus
Spoken Word and Poetry
Kay Ulanday Barrett Inspires with Spoken Word: “You Do Not Have To Be Fixed”
October 27, 2014 at 6:06 pm by Janel Mendoza

Thursday, Oct. 23 kicked off spoken word poetry at UCSB. A big shout-out goes to the MCC for hosting Kay Ulanday Barrett’s third spoken word performance on the Love & Ruckus Tour: A Night of Trans & Disabled Performance. Following his performances at Columbia University and the College of New Jersey, it was an honor to have a Campus P.R.I.D.E. Hot List artist and 2013 Trans 100 Honoree perform at Coffee Cat and educate UCSB students through the Liberation Shows Up!: Ableism and Disability Justice workshop at the MultiCultural Center.

For the workshop, the MCC lounge furniture was re-arranged with chairs and tables in a close-knit circle. Participants were given handouts such as “Quotes from Sick and Disabled, Mad/Brilliant Community on our lives,” “Hurtful Disability Words and Why” and “Disability Justice Collective Resources.” Prepared for a deep and heavy discussion, Barrett began the dialogue by asking thought-provoking questions and continued the seminar by examining several narratives. With photos, videos and other visual and verbal presentations, Barrett defined disability and ableism.

After thoughtful conversations of discriminatory practices and beliefs against the disabled, the attendees of the workshop felt intellectually refreshed and inspired to celebrate the diversity within their communities. The hot topic of the night was why disability and sickness are so often identified as flaws. By the end of the workshop, UCSB students found themselves educated and stimulated with a healthier view on disability. Instead of conforming to that identification, students were encouraged to understand and love others (and themselves) for who they are.

A couple of hours later, the scene surrounding Barrett changed as the smell of Coffee Cat’s signature sweet Vanilla Cool 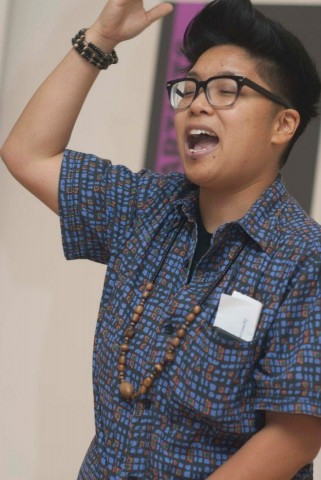 Cat filled the air. People began making their way to Downtown Santa Barbara for a night filled with cappuccinos and poetry. As the baristas busted out the extra chairs, tables and blenders, the café was ready to cater to a full house of students thirsty for coffee and hungry for poetry.

The café lights dimmed down and a blue beam shined on Barrett as he sat down, eye-level with his audience. It was an intimate setting, and everyone held a cup of coffee in hand while they listened to Barrett perform some of his best pieces throughout the night. While everyone enjoyed his powerful voice, some closed their eyes and listened with intent and compassion, whereas others sat at the edge of their seats with passionate nods of agreement to his spoken words.

Popular poems like “Song for the Kicked Out” instilled enthusiasm in students. Barrett described the liberation from oppression, booming, “together we are an anthem despite their cis hetero fuss/together we are stronger than the world’s unsaids.”

Fourth-year Sierra Tau Tau Pele ended the spirited night with a call to action. “We need a change still in how the world perceives people of color, transgender and queer people,” she said. Listening to Barrett was a solid jumping-off point.

In a conversation after the event, second-year Brenda Arellano relayed her favorite line from Barrett’s poem. “Sometimes you just gotta call out your own power ‘cause no one else is gonna do it for you,” she said, reflecting the spirit of individuals who cannot and should not be categorized by a hetero-normative society. Similar to many students who attended Love & Ruckus, Tau Tau Pele and Arellano thought Barrett’s words were both powerful and inspirational.

It took only one night in Santa Barbara for Barrett to express his beliefs and inspire a whole coffeehouse of students in the process. As a performer, educator and acclaimed activist, Barrett works across the nation, visiting colleges and sharing his ideas. The biggest takeaway sentence of the day came from his workshop at the MCC. With boldness, Barrett said, “You should not be shamed for you who you are. You do not have to be fixed. You don’t have to change if you do not want.”

For more information, or to get into contact with Kay Ulanday Barrett, go to kaybarrett.net/.