Anisq’Oyo’ Park in Isla Vista is the picture perfect location for outdoor events. Used for the yearly Shakespeare in the Park productions, the amphitheater setup makes for perfect viewing no matter where you decide to sit. For Saturday night’s “Hello World!” concert I decided on a higher-up spot on the dewy green grass. It was a chilly evening but the perfect night to hold this free event put on by the MultiCultural Center and KCSB campus radio station. As show time drew near I began to wonder if the crowds would ever begin to filter in. With one of UCSB’s biggest soccer games of the year happening simultaneously, it only made sense that maybe this was as good as it was going to get: 15 audience members, which included some students, some homeless guys and a dog. 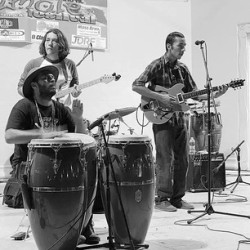 With the soothing echo of a saxophone being tuned behind the stage, my worry grew. Then mexico68, a 13-piece band walked onto the stage, their lead singer wearing a baggy white tee and jean shorts. With blue lights reflecting on their faces, they began to play to the tiny crowd. Needless to say, those that were in attendance seemed to be enjoying the bands energy. Mexico68 is an afrobeat band from Los Angeles. Their polyrhythmic sounds are heavily influenced by the beats of Nigerian music as well as Chicano funk. With instruments ranging from saxophones to the bottle shaped shekere, it was easy to move around to the mostly instrumental music.

As the set progressed the park began to fill, and soon the audience began to dance. The lack of lyrics added something to this set that words can take away at times. The audience had a chance to embrace just the sounds and interpret it however they wanted. When mexico68’s set was over the atmosphere changed.

When the next act, Chicano Batman began to set up, it was clear who many of the concertgoers came to see. All around me people wore black shirts with Batman logos across their chests. As singer Bardo Martinez made his way to the stage, his curly black hair bouncing, I was a little disappointed that he wasn’t wearing a cape or mask, but the crowd cheered anyway. Dressed in button-down flannels and jeans, the LA-based band began their first song of the set. Founded in 2008 by Martinez, Eduardo Arenas and Gabriel Villa, Chicano Batman made a splash in the Latin music world. With the addition of Carlos Arevalo, the band came full circle with the release of their second album Cycles of Existential Rhyme in 2013.

As the evening rolled on Martinez let Eduardo Arenas take on vocals, while he stepped aside and played bass. Both singers had silky smooth voices, and were interactive with the crowd, often saying how happy they were to be back in I.V. On more than one occasion they asked us to sing and dance along with them, and were met with no resistance. It was difficult not to dance as their throwback cumbia sound flooded the park. They played a song entitled “Magma,” and I was sold. 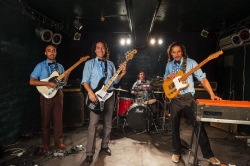 These guys were the real deal. Following more fan favorites such as “Jalapeño” and “Para Agradecer” they ended the set by asking the audience to sing “Gracias a la vida,” which translates to something close to “thank you, life.” They ended, but only to be convinced by yells of a man next to me. “One more cancion! One more song!”

Kindly obliging, they gave us one more. “It’s an honor to be here, it’s also an honor to be here with the love of my life and to be with these guys. And you all as well.” These final words from Martinez helped end the set on an even more positive note than when it started. It was obvious to see why the MCC and KCSB would want an up-and-coming band like Chicano Batman to perform.

The jazzy Latin band received praise from everyone around and an SBCC student named Abraham explained what it meant to have an event like this put on: “It’s definitely satisfying for everyone, not just for the students but the community as well. It brings positive vibes to the campus and to the city of Isla Vista.” Soon after, Los Macuanos made their way to the stage and closed out the show with psychedelic dance music.

Hello World! was put on to promote musical and cultural diversity, as well as to lift the spirits of our beautiful town after trying times. Mexico68, Chicano Batman and Los Macuanos’s performances at Anisq’Oyo’ Park shows how diversity and bouncy tunes can bring us together, even if just for an evening.