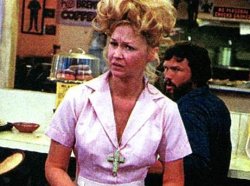 On Thursday, Oct. 23 UCSB’s Pollock Theater was filled with film connoisseurs anxiously waiting to see award-winning actress Diane Ladd on the big screen and in person. The room was overwhelmed with applause as we watched her name appear on the screen before witnessing her performance as Flo in Martin Scorsese’s 1974 film “Alice Doesn’t Live Here Anymore.” Her on-screen delivery moved our hearts as expected, but it was her off-screen words of advice that challenged our minds.

Ladd is a three-time Oscar and Emmy nominee and has earned an Academy Award for her many performances in film and television. She’s an accomplished actress, writer, director and author in addition to being a loving wife and mother. Her film résumé is untouchable and her roles are countless, but none of us can forget her performance as Flo in “Alice Doesn’t Live Here Anymore.”

“Alice Doesn’t Live Here Anymore,” directed by Martin Scorsese, stars Ellen Burstyn as Alice, a widow who travels across the country with her son in hopes of pursuing a singing career and starting a new life. Along her journey Alice meets Flo, played by Ladd, a rebellious waitress who serves meals with a side of sass. From telling Alice that unbuttoning her shirt will get her more tips to forcing Alice to woman up and make a decision, Flo is the friend that keeps it real and keeps us laughing. It’s no wonder Ladd won the BAFTA award for Best Supporting Actress for the role.

After watching the film, the audience rose to their feet to applaud the accomplished actress and welcomed her to the stage for a little Q&A. Her charming Southern accent and witty speech wooed us again as she told us stories about her life and experiences working in the film industry. She told us about how she surprised the world with the miraculous birth of her daughter Laura after doctors told her it would be impossible. Laura Dern went on to follow in her mother’s footsteps and the two actresses have worked together in films such as “Wild at Heart” (1990) and “Rambling Rose” (1991).

When asked what working with Martin Scorsese was like, Ladd replied, “Marty is one of the greatest directors that I have ever worked with before in my life.” She talked about how great it was working with a director who loves you because the director-actor relationship is like a marriage. “Marty’s a New York director and with New York directors, you don’t talk with them til’ after lunch!” she joked.

Ladd and her daughter Laura work hard to bring back roles for women. “It’s very hard to get the men in the profession to read a film script written by a woman, especially one who is an actress,” she confessed. Ladd is working with Scorsese again in her upcoming film “Woman Inside,” which tells the story of Martha Mitchell during the Watergate scandal.

Meeting Ladd and hearing her speak was truly an inspiration. The first thing she said to me after the Q&A was that she liked my dimples and that her mother used to tell her that dimples were a sign that the angels kissed you as a baby! Could she be any sweeter?

Her humor and kind spirit attest to her humility, her talent is unmatched and her passion is raw. Ladd reminded us, “Films bring great truth to human beings and bring opportunities for us to see ourselves.” She encouraged us to work hard and have faith in all that we do. And her humor is just as witty and clever in person as it is onscreen.

Check out Diane Ladd’s organization for the promotion of education, culture and literacy called The Art and Culture Task Force. For more information, go to dianeladd.com 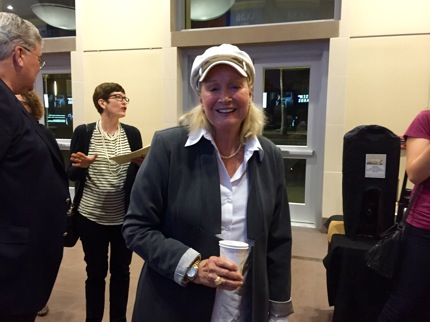