The Daily Nexus
Sports
A Night of Magic: Magic Johnson Tells All at the Arlington
October 27, 2014 at 6:26 am by Mark Salay 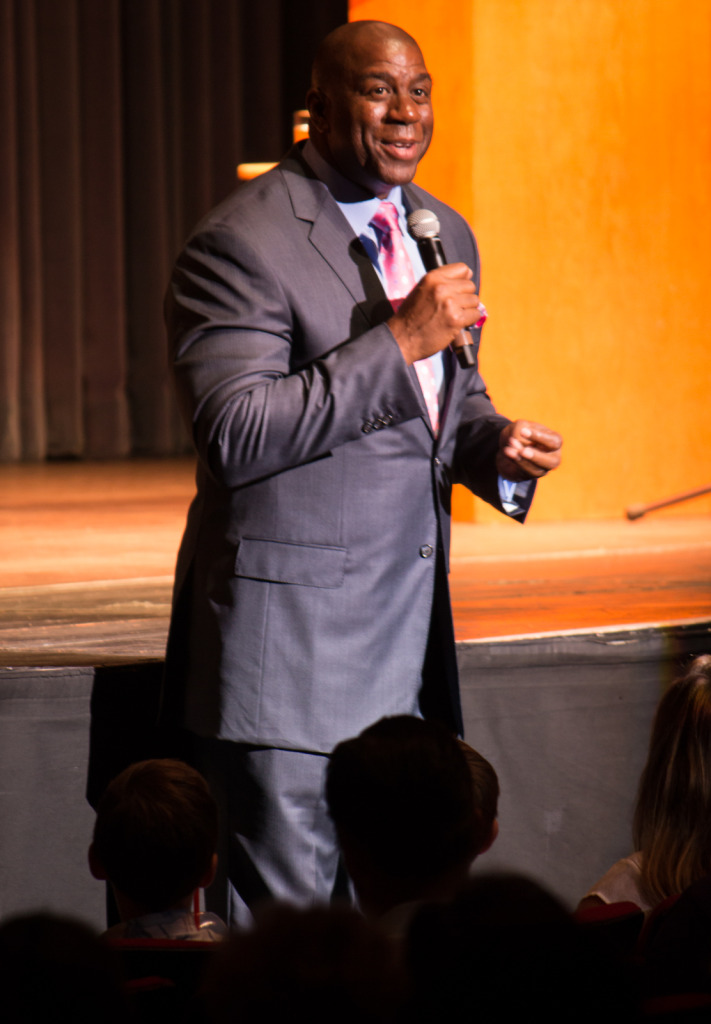 Basketball legend and entrepreneur Earvin “Magic” Johnson was on hand at the Arlington Theatre in downtown Santa Barbara this past Friday for his event, The Magic of Winning, where he discussed career moments that led to his path to success.

The talk presented by UCSB Arts & Lectures in association with UCSB Athletics, had the former Los Angeles Lakers player revisit stages of his life, from playing basketball in a high school divided by racial tension to his business ventures in minority communities. Throughout the night, Magic reflected on how his ideals and philosophy led to his achievements.

“Winning is a mindset and you have to have a will to win. In basketball it starts in practice,” Johnson said. “I was the hardest worker on every team that I played on, but it started in practice.”

Among early parts of his NBA career Magic recalled was his first year in the league, when he became the first rookie named NBA Finals MVP and only the third person to win a college national championship and NBA title in consecutive years.

Playing alongside Hall of Fame talent such as Kareem Abdul-Jabbar, James Worthy and against the likes of Larry Bird and Michael Jordan for nearly his entire playing career, Magic referred to his work ethic as the reason for his success on the court.

“Self-evaluation is the hardest thing when you have to really critique yourself and be honest with yourself,” Johnson said. “What are you strong at, what are you weak at, what you need to work on. So I wasn’t afraid to say I needed to work on some things to get better.”

Having been one of the earliest public figures to come out as being diagnosed with HIV, Johnson has been an advocate for HIV education since his retirement in 1991. At his talk, Johnson took a brief moment to address practicing safe sex and his contributions to raising awareness on the issue, noting having raised over 15 million dollars for the cause through his Magic Johnson Foundation.

Now a part owner of the Los Angeles Dodgers, Magic recounted getting his feet wet in business, first by opening Magic Johnson Theatres, a chain of movie theaters that served urban communities. He followed that up by securing a deal with Starbucks, where he expanded business operations to urban areas, eventually selling 125 stores back to Starbucks after a successful partnership.

“What did that give me? The track record of success among everybody across the nation that Magic was a serious businessman,” Johnson said.

Johnson, whose charisma and personality helped revitalize the NBA during the 1980’s and led him to become a superstar outside of the sports world, took time during his presentation to interact with audience members, take photos and offer humorous anecdotes of his playing days.

After Magic finished his talk, handwritten questions from audience members were selected for a Q&A. A wide range of questions was presented during the session where Magic talked openly on each subject.

When asked about the NBA’s handling of the Donald Sterling incident, Johnson reiterated his support of the league banning Sterling from the NBA, saying there is no place for racism in the NBA or in society.

Other viewpoints expressed by Magic during the Q&A session included criticism of the Lakers for not hiring coach Phil Jackson during the 2012-2013 season, supporting a two year requirement for college basketball players before being eligible for the NBA Draft and the need for entrepreneurs of color to help other minority business people.

Before ending his talk, Magic offered one final piece of advice for everyone in the audience on his key to success.

“I want you to over-deliver to everybody, your parents, your professor,” Johnson said. “That’s what we all have to do now. It’s not enough in the marketplace just to deliver anymore. You have to over-deliver, and then you’ll get the retention you’re looking for.”