The Daily Nexus
Water Polo
Water Polo Takes On UCLA at Campus Pool
October 23, 2014 at 5:01 am by Edward Moss 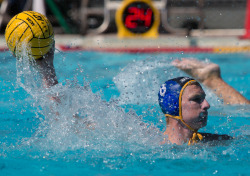 This Sunday, Santa Barbara plays No. 3 UCLA for the first time this season. Dustin Harris/Daily Nexus

No. 7 UCSB men’s water polo team hosts No. 3 UCLA this Sunday in a MPSF conference match where the Gauchos will need a response after a crushing loss to No. 1 Stanford last weekend.

The Gauchos enter Sunday’s match with a 9-8 record but are 0-3 in conference play after losing to Stanford, Long Beach State and USC. The Bruins are currently 19-2 including a 3-0 record in conference play with a match Friday afternoon against Stanford before coming up to Santa Barbara.

“We had a down game against Stanford; we made a lot of mistakes,” freshman utility Chase Racich said. “We did not play well and it was kind of the nail in the coffin for us … Now we’re trying to get fired up against UCLA this weekend.”

After playing an alumni match Saturday afternoon, the Gauchos will need to be ready to take on an extremely talented UCLA squad. The two teams have not played yet this season but they know each other well from watching each other play at tournaments.

The two losses for the Bruins this season have come at the hands of Stanford and No. 2 USC. They both occurred during the SoCal Tournament where UCLA settled for fourth place after losing to USC in the semifinals and Stanford in the third-place game. UCLA had beaten both of these teams earlier in the season, giving them reason to believe they still have a strong chance at winning the NCAA title this season.

UCSB is looking to change its tactics against the Bruins. With injuries to senior attacker Eric Van de Mortel and junior attacker Matthew Hamilton, the Gauchos experienced a lot of confusion the last few games in important offensive and defensive situations that led to turnovers and bad goals allowed. UCSB will be using a simplified plan on defense in order to play smarter against the Bruins after reviewing game film.

On defense the team will expect a lot out of Whitelegge as he faces a strong, experienced attack. Senior utility Brendan McElroy, junior attacker Kevin Cappon and Racich will need to be in top form to stop the Bruins attackers and to keep them on the outside when taking shots.

“The game’s going to come down to effort,” Whitelegge said. “We gotta match their intensity and outwork them in order to give ourselves the opportunity to win this match.”

The Gauchos and Bruins square off at noon on Sunday at Campus Pool.

A version of this article appeared on page 13 of October 23, 2014’s print edition of the Daily Nexus.