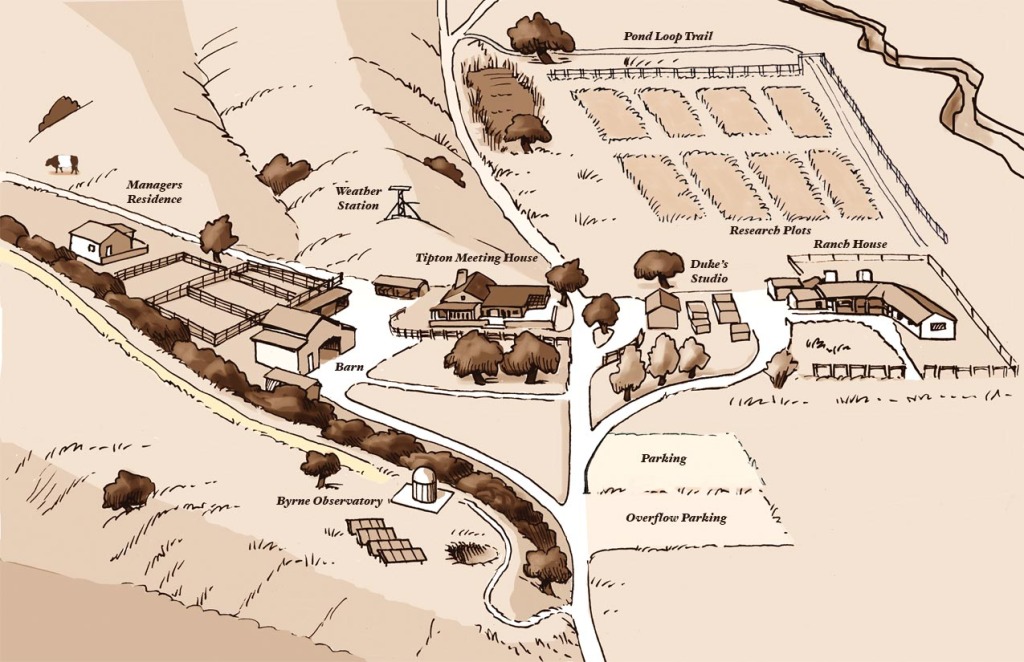 This map shows the approximate layout of buildings on the Sedgwick reserve property. Map courtesy of sedgwick.nrs.ucsb.edu

On Monday, the university announced that alumna Linda Duttenhaver donated $2 million towards the restoration of a 1950s ranch house on Sedgwick Reserve which accommodates affiliated researchers from half of the approximately 40 projects on the reserve.

The donation will go towards bringing the Sedgwick ranch house up-to-date with fire and building codes, followed by renovating the facility to make it more comfortable and functional for residents. The Sedgwick Reserve is located 40 miles north of campus in the Santa Ynez Valley and is one of seven reserves managed by the university’s Natural Reserve System (NRS), a branch of the greater UC Natural Reserve System which oversees 39 reserves in total throughout the state.

According to Sedgwick Reserve Resident Director Kate McCurdy, the money may be used to update specific parts of the house.

“We hope to modernize the really funky old 1950s kitchen, to make it useful for people to cook,” McCurdy said. “Right now the house is set up in a dorm style with lots of bunk beds so we’re also going to replace the bunk beds with double beds.”

Patricia Holden, professor of environmental microbiology in the Bren School of Environmental Science and Management and director of the Natural Reserve System, said the mission of the UC NRS is to “support broadly university level research, education and public outreach.”

According to Holden, all UC NRS projects are “approached with the lens of sustainability,” and make energy and water conservation an important criteria throughout the design process.

“We currently produce our own energy here with solar panels,” McCurdy said. “Now we want to replace the windows and possibly do rainwater capture off the roof, and also replace the heating system so it is more energy efficient.”

McCurdy said Duttenhaver is “one of those rare gem alumni,” who has made significant contributions to Sedgwick Reserve over the last few years.

“It’s very important to her to see students use what they’re learning in the classroom out in the field,” McCurdy said. “She definitely recognizes that having a decent place to stay when you’re out on the edge of wilderness is very important. For students and faculty to really be inspired by the place they’re working at, they need to be comfortable and safe.”

McCurdy also said some of Duttenhaver’s past donations have aided the renovation of the ranch’s historic barn, as well as the development of an outreach program.

“That barn was so close to falling over and it was pretty scary to be in there on a windy day because you could see the whole thing moving,” McCurdy said. “So she really did save that from the brink of collapse. Then our outreach program allows us to have public hikes and a lecture series. So without her help it would be pretty quiet out here.”

“Researchers can come and set up an experiment or classes can come and get involved in a project and they know that it won’t be disturbed,” said Moore. “It also protects the area, keeping them as restored to their original condition as they could possibly be, and gives researchers a place to stay and keep their equipment.”

Various research efforts are pursued at the reserve within fields including botany, archaeology, microbiology and geology. According to McCurdy, native plants and animals thrive in an undisturbed habitat. Additionally, a telescope is also being used at the Sedgwick Reserve by the Las Cumbres Observatory Global Network, a nonprofit network of robotic telescopes used for science and education.

“We are sort of at the southern end of the Transverse Range and we have a unique soil type that is high in turpentine that invasive plants don’t do very well in, so we have a lot of native plants that aren’t found elsewhere,” McCurdy said.

McCurdy also said a grant has been submitted to gain funding for the construction of a 24-bed dormitory adjacent to the ranch house, with a groundbreaking set for 2016.

According to McCurdy, Sedgwick Reserve is “a little national park” and a place where “you will never know what you’re going to encounter.” McCurdy also said the reserve offers visitors many surprises and a natural habitat worth protecting.

“What amazes me about this property is how enormous and rich it is,” McCurdy said. “You can see deer and bears and eagles, or you may see animal tracks or a freshly killed deer that a mountain lion just killed. So there’s evidence of just how biologically important this place is. This really is the perfect place to have a reserve.”