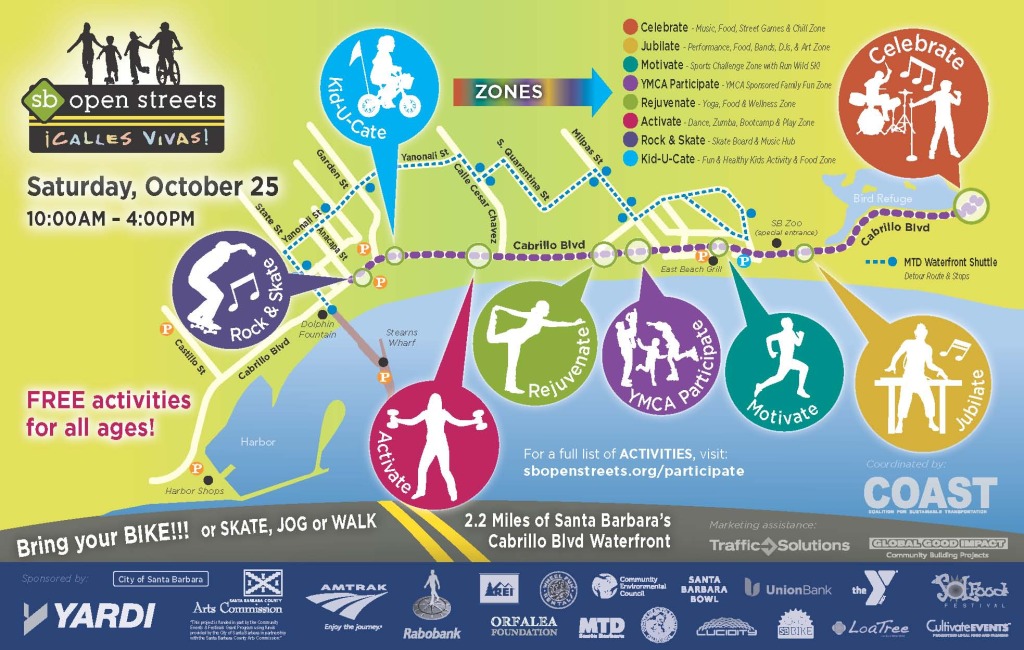 A map of the events that will be held during the second annual Santa Barbara Open Streets. Photo courtesy of nprnsb.org

The Coalition for Sustainable Transportation (C.O.A.S.T.) will present their second annual Santa Barbara Open Streets this Saturday from 10 a.m. to 4 p.m. on Cabrillo Boulevard from the Andree Clark Bird Refuge to Anacapa Street.

During Santa Barbara Open Streets, over 2.5 miles of Cabrillo Blvd. will be blocked off to cars to allow for biking, dancing, yoga and other active, outdoor activities. The free event aims to promote health, flexibility and fun on the streets of Santa Barbara without cars, according to the SB Open Streets website.

Member of the C.O.A.S.T. Board of Directors Eva Inbar said her organization is a nonprofit promoting green and healthy transportation and that the idea for SB Open Streets originated in Bogotá, Colombia, where similar events called Ciclovía have been held every Sunday for over 30 years. Eva said she and fellow organizer Kent Epperson first attended a Ciclovía event in Los Angeles, CA, which inspired her to bring this concept to Santa Barbara.

“We went down to Los Angeles for Ciclovía, and we took part and we had the time of our lives,” Inbar said. “We said we want to bring this to Santa Barbara, and we did, so we set out to do it. It surprised me and everyone else that we actually pulled it off last year.”

“We got really positive feedback from the participants, and more importantly, the City of Santa Barbara viewed it as a very professional and positive event,” Epperson said. “Everything went off incredibly smoothly, and so the city manager basically said, ‘I’m looking forward to this being one of those signature events that happens every year in Santa Barbara.’”

Inbar said the event is meant to get people out of their cars, bring them together and encourage them to be active.

“It’s really a community forum, and it’s so much fun,” Inbar said. “It’s all ages, it’s very inclusive, it’s all income groups, and it’s all free.”

“I would say that this year will be double or more in size,” Robin said. “This year we have quite a number of new additions.”

“We have a Run Wild 5k, is part of it, people will dress up in Halloween costumes and run a 5k, as well as a 1k, so a kids event, that goes through the zoo,” Elander said. “It’s $30 to participate, and people get a free t-shirt with that.”

Epperson said other activities include a basketball tournament, a rock-climbing wall, tarp surfing and a build your own skateboard area. Free dance activities and classes of all types will also be offered, such as Zumba, salsa and hip-hop. Epperson said the organizers would also be providing food at this year’s event.

“We also have food this year, which we didn’t have food last year,” Epperson said. “Probably one of the most common constructive feedback we got was that people wanted to see some healthy and convenient food that they can grab and go.”

Epperson said he would like to see people come out by bicycle, skateboard or other forms of transportation besides motor vehicles.

“I think one of the reasons Traffic Solutions is interested in this concept is that by opening the streets up, repurposing them for the day, we have a better understanding of what public space could be used for,” Kent said. “We dedicate a lot of space to automobiles, but it’s valuable space, a public community owned space, and I’m excited to see what people will do with the space without cars.”

I think this is among the so much significant information for me.

And i’m satisfied reading your article. But want to observation on some basic issues, The web site style
is ideal, the articles is in point of fact nice : D.
Excellent process, cheers