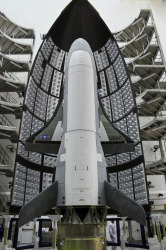 1. Top-secret military space plane returns from orbit.
On Oct. 17, an ultra-secret space plane belonging to the United States Air Force touched down in Southern California. Unbeknownst to the world, the United States Air Force was conducting a test mission of the Boeing X-37B for nearly two years.
The plane is capable of space flight and has spent nearly 674 days in near-earth orbit; however, no one seems to know exactly what the plane was doing there. Theories range from the very practical equipment and payload stress-testing, to the James Bond-esque capturing of rival nations’ satellites. The only clue into its actual mission is a public statement from Air Force that said it was merely conducting on-orbit experiments.
The X-37B program was started in 1999, and after contributions from multiple federal agencies and defense contractors, the program now lies in the hands of the Air Force Rapid Capabilities Office. While no one knows what the space plane was actually doing, the United States Air Force stated that they plan to launch another X-37B mission next year. 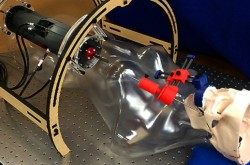 2. Developing a robot capable of minimally invasive brain surgery.
Brain surgery is typically only possible by first performing an operation known as a “lobotomy.” The process consists of removing part of the skull from the area of the brain that needs operation, which carries a high risk. A team of engineers at Vanderbilt University created a potentially life-saving solution to this inherent risk.
Through combining state-of-the-art equipment such as MRI machines, non-magnetic 3-D-printed parts and advanced CPUs, the researchers created a robot capable of performing brain surgery by entering the skull from under the cheek. Because the needle needs to avoid several obstacles to reach many parts of the brain, the surgical tool is constructed with 1.14mm pneumatic tubing, which is used in coordination with a MRI machine to ensure safe path-finding. The researchers will start work on human cadavers soon with the hope that the machine will be approved for surgical use within the decade. 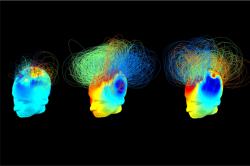 3. Neuroscientists identify “hidden” brain activity linked to awareness.
Scientists at the University of Cambridge in the UK identified a way to tell whether a person in a vegetative state is aware or not. Combining the methods of high-density electroencephalographs (EEG) and mathematics known as “graph theory,” the team of researchers developed an effective method to study brain activity in unresponsive patients. The researchers asked 32 patients diagnosed as vegetative to imagine playing a game of tennis, and then measured the activity in their brains.
This EEG and “graph theory” method is notably more advantageous than the traditional fMRI study in that it is far cheaper and can be administered at the patient’s bedside. Surprisingly, the test results show that many of these patients have neurological capabilities similar to most healthy adults.
“There are limitations to how predictive our test would be used in isolation, combined with other tests it could help in the clinical assessment of patients. If a patient’s ‘awareness’ networks are intact, then we know that they are likely to be aware of what is going on around them,” Tristan Bekinschtein, from the University of Cambridge, said in a press release. “But unfortunately, they also suggest that vegetative patients with severely impaired networks at rest are unlikely to show any signs of consciousness.” 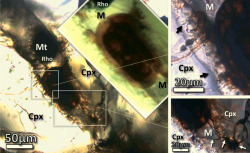 4. Billion-year-old Martian meteorite shows sign of life.
In 1911, a 1.38 billion-year-old crystallized meteorite fell to Earth after an impact event launched the object from the surface of Mars.
While investigating a sample, Elias Chatzitheodoridis and fellow researchers from the National Technical University of Athens  identified an unusually striking structure inside the meteorite. The structure turned out to be a remarkably “cell-like” oval structure with a concentric containing wall.
Ian Lyon of the University of Manchester, who was part of the research team that identified the structure, said in a press conference that the structure was definitely from Mars, yet closely resembled a biological earth cell. The researchers carried out intensive tests to determine the true nature of this alien structure through an array of both imaging and analytical techniques. Their paper, published in the journal Astrobiology, stated that the “petrographic context of this highly elliptical ovoid structure within late-forming mesostasis glass, coupled with its relatively large size, distinct chemical composition, and complex microtextures, supports this idea and effectively rules out the possibility of an origin by contamination.” The study was inconclusive as to whether the structure actually was a cell, but it did indicate that it once contained water, a key component of cells and thus life.

5. Laboratory-made black hole found to emit Hawking radiation.
Professor Jeff Steinhauer of the Technion-Israel Institute of Technology claimed to have successfully observed Hawking radiation in his laboratory. If true, this will allow scientists to analyze one of Stephen Hawking’s most important predictions. Hawking predicted that when a particle is drawn into the event horizon of a black hole, it splits into a particle-antiparticle pair due to the immense gravitational forces. Only one of the these particles would be drawn into the void and the other would be ejected into space, thus robbing the black hole of half the energy required to split the particle, eventually causing the hole to evaporate by bringing down its mass. Steinhauer said he nearly recreated this prediction by cooling rubidium atoms to less than a billionth of a degree above absolute zero. This causes the rubidium to become a Bose-Einstein condensate, which is a collection of bosons that collapse into their lowest quantum state. He then used lasers to vibrate the condensate, trapping sound waves from quantum fluctuations in a way he says mimic the way gravity traps energy around a black hole. These fluctuations in the bosons were significant because they occurred in pairs, mimicking the predicted particle-antiparticle groups. Though it is not certain whether this method directly mimics circumstances in actual black holes, these findings may lead to a greater understanding of our universe.
Print