The Daily Nexus
Sports
UCSB Returns Home After Winless Roadtrip
October 22, 2014 at 5:00 am by Michael Jorgenson 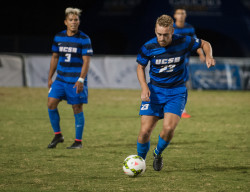 The Gauchos will be without key players tonight against last-place Sac State. Cameryn Brock/ Daily Nexus

“We’ve had a rough last couple games and we’re looking forward to being back home and turning our season around,” junior defender Brandon Brockway said. “The plan is to just get one game at a time and end these next six games 6-0, so that’s what we’re working for.”

Being back at Harder Stadium will be a pleasant change of scenery for UCSB, where the Gauchos are undefeated in their last four games while averaging two goals per game. Their results on the road have been near mirror opposites, where they have gone 0-3-1 in their last four outings while being shutout three times.

“We’re hoping that home-field, where we’ve been very successful, will allow us to see if we can get a little momentum for the next couple games,” Head Coach Tim Vom Steeg said. “Hopefully Wednesday we should come out with a lot of energy and we should be excited to be back home.”

Finding any consistency in the starting XI has been a major problem for UCSB, as injuries and suspensions have continued to tear them apart. This Wednesday, players missing from the lineup will include freshman midfielder Ryo Fujii, suspended junior defenders Dylan Murphy and Brockway, and injured senior right back Kevin Garcia-Lopez and junior midfielder Adam Carn-Saferstein.

“The issue [in the last four games] is we’ve almost literally ran out of players,” Vom Steeg said. “Between yellows and reds, and then injuries, on Wednesday we might be suiting up basically 15 players. We just have to figure out a way to win with what we have.”

If UCSB is going to be able to win with its depleted roster, it will have to find a way to score goals. Luckily for the Gauchos, they are going up against a Hornet squad that has allowed a conference-most 27 goals while also scoring a Big West-worst 11 goals in 14 games.

“It’s a lot about momentum. You need to feel good about yourself,” Vom Steeg said. “Every one of these games is tight, close, and intense and comes down to one play. We need to play really, really hard and we need one of our players to step up and find a way to get us through a game.”

Despite missing numerous players, the Gauchos will welcome the return of sophomore forward Nick DePuy, who missed the last game due to yellow card accumulation. DePuy has a team-high four goals this season, followed by freshman forward Ludwig Ahl with three.

For Sacramento State, the focus offensively will be on senior forward Chimdum Mez, who is tied for third best in the conference with six goals.

“I think the guys are starting to understand and figure out as a unit what it’s going to take to get wins,” Brockway said. “Scoring first this weekend and keeping a shutout is going to be huge, but 100 percent at this point, the most important thing is mindset. It’s all mental for us.”

UCSB is set to kickoff against the Hornets at 7 p.m.