The Daily Nexus
Fine Arts
Peter Shaffer’s Amadeus: The Rise and Fall of Mozart and Salieri
October 22, 2014 at 11:45 am by Phi Do and Arasch Blurfrushan 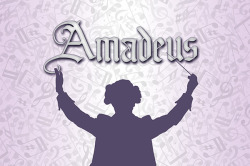 From the melody of “Twinkle, Twinkle, Little Star” to his “Requiem Mass in D Minor,” the music of Wolfgang Amadeus Mozart is forever imprinted in our culture. Peter Shaffer’s 1979 play “Amadeus” has come to Santa Barbara, depicting not only the rivalry between Mozart and his contemporary Antonio Salieri, but also the beauty of his music.

In many of today’s books, films and plays, the story’s message is clear: good overpowers evil, be true to yourself, think before you judge and the like. Morals like these, learned by coming-of-age protagonists, engage the audience as they discover the potential within the characters and ultimately within themselves. “Amadeus,” however, does quite the opposite, presenting music as a battleground between two fierce composers and featuring an envious, scheming protagonist.

The stars of the play, Daniel Gerroll as Antonio Salieri, and Randy Harrison as Wolfgang Amadeus Mozart, played off each other delightfully, bringing humor and complexity to their characters through their relationship. Gerroll brought sophistication, charisma and a powerful stage presence to Salieri, making for an excellent lead, while the energy Harrison supplied Mozart was captivating and stole every scene.

Bo Foxworth was also exceptional in the role of Emperor Joseph II: quirky and humorous, he made the audience laugh every time he walked onstage. But the standout supporting actor was Zoe Chao as Mozart’s wife, Constanze Weber. Her despair as she watched her husband deteriorate was heartbreakingly emotional and reverberated throughout the room.

The play began with Salieri sitting in a wheelchair with his back to the audience. A small piano and ornate door arches decorated the stage. Two venticelli, the chorus who informed the audience, descended the stairs on both sides of the crowd, announcing, “I don’t believe it!” They went on to debate the validity of a daunting rumor: Did Salieri murder Mozart?  Salieri turned on his wheelchair to greet the audience from his place in the asylum and took them through his past to discover the truth for themselves.

As Salieri narrated his story, the audience found themselves tangled in two musical journeys: Salieri’s and his rival, Mozart’s. From Salieri’s prayers to God to Mozart’s financial struggles, viewers saw not only the struggle of two passionate artists, but also the clash as the main characters battled for eternal fame. Each wanted what the other lacked: Salieri longed for Mozart’s genius and Mozart wished for Salieri’s unrivaled reputation and wealth.

Throughout the play, Salieri broke the fourth wall. He introduced audience members to important characters, discussed his clever plans to sabotage Mozart and most of all, unfurled his jealousy. It’s the latter that invited the audience into Salieri’s perspective and into the play itself.

Mediocrity was a major theme of the show. Salieri, although a talented composer, wrote music that was conventional, and as Mozart said, “boring.” Worried that his music would disappear when he did, Salieri went to great lengths to ensure that his name would not die. He turned the court against Mozart, humiliated Mozart’s wife, attempted suicide and confessed to Mozart’s murder. While the audience may not sympathize, they can certainly empathize. After all, everyone wants to be immortal.

Disregarding conventional storytelling methods, “Amadeus” presents the downfall of two men and exposes the tragic flaws in individuals. Though classical music and 18th century power struggles may not entice everyone, Ensemble Theatre Company presented an intimate performance to the audience with exceptional acting and high production values.

Ensemble Theatre Company’s “Amadeus” is currently at running at the New Vic Theatre in Santa Barbara until Oct. 26. Tickets for students are $20 and can be purchased at ensembletheatre.com/boxoffice/tickets.