The Daily Nexus
On the Menu
One Year Later, Still Packing Bowls
October 22, 2014 at 5:00 am by Taylor Templeton

As a recent re-entry student at UCSB I was late in discovering the wonder of Embarcadero del Mar’s Buddha Bowls. But after only three weeks living in the Isla Vista area, I had already packed three bowls. In honor of the bread-centric restaurant’s one year anniversary, I returned to see what blossom emerged from the budding business and to pack a fourth “bowl for the soul.”

Since its beginnings, Buddha Bowls has changed for the better while maintaining its laid-back and bohemian vibes. The owner, Daniel Dunietz, still churns out fresh bread bowls but has added more options that are sure to leave customers satisfied. The menu now includes the ability to create your own bowl packed with any combination of veggies, meats, sauces and cheeses in addition to staples such as the Pizza, Mac ‘n’ Cheese and BBQ bowls. Daniel says the option to “create your own” is the future of food since everyone has specific tastes and claims the build-your-own-right-in-front-of-you idea makes people feel special. I had to agree. As I pointed to each ingredient I desired, my anticipation and appetite grew. I chose sourdough for my bread and filled up my bowl with pesto, white meat chicken, cooked onions and peppers, fresh spinach, cucumbers, tomatoes, feta cheese, pepper jack cheese, olives and artichokes. Normally in places like this the employees skimp on the sauce so I was prepared to ask for extra on the side. As a saucy girl who comes from a saucy family, I had to let out an exuberant “AMEN!” when I saw the employee give me a generous portion of pesto. Even more surprising was the size of this bowl. The steaming mixture of goodies in the hollowed out sourdough was almost overflowing and left me with leftovers for the rest of the day. 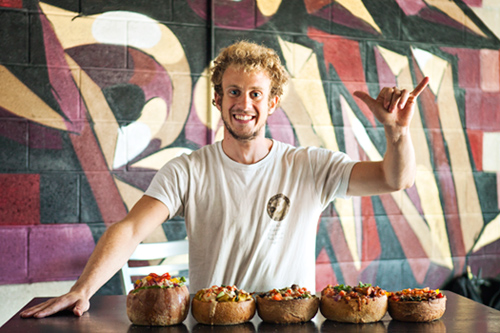 While I sat tearing off pieces of toasted bread, Daniel made a sandwich for himself and told me about the strong political opinion behind the bowls. The restaurant’s stoner-friendly menu and art is Daniel’s personal way of making a difference along the path to legalizing marijuana. He states that his overtly weed-friendly business is just one way our generation can show that not all stoners sit around wasting time. Through a mouthful of feta and caramelized onions I commended his efforts. Despite the gloomy haze of the recession, Daniel emerged from the undergraduate mist with a liberal arts degree and determination to become successful. With his forward-thinking business model and a year of operation under his belt, Daniel is definitely on the right track.

After bowl number four, I could conclude that Buddha Bowls stands above a lot of restaurants in I.V. for a few main reasons. First off, the food is relatively healthy and super fresh. A shipment of new produce was arriving as I walked in to meet with Daniel. Second, despite the enormous portion, the food didn’t leave me in the dreaded food coma. While Buddha Bowls is all about the simple and the tasty, there is no gluten free or tofu option. While Daniel says, “dietary restrictions are not [his] niche,” there is the option to create a breadless bowl or to substitute with kale and spinach. There are even soup options for those in the mood for some comfort food. Finally, Buddha Bowls’ food seems like it should be expensive but the bowls cost about six to eight bucks, which I don’t mind paying for such a delicious and large portion. If eight seems too pricey, every bowl costs five dollars until the end of October.